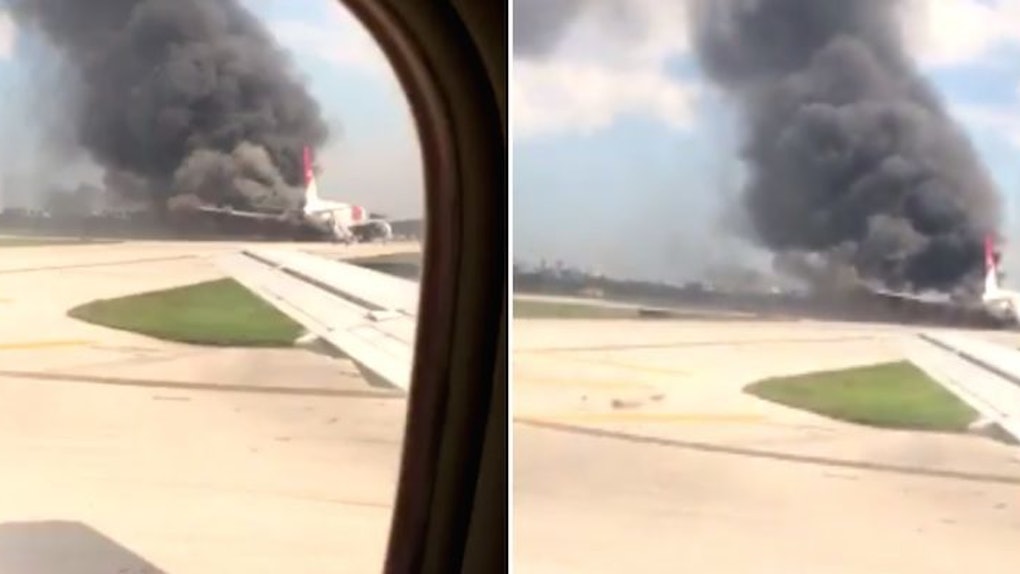 According to WSVN, the left engine of Dynamic Airways Flight 405, a Boeing 767, burst into flames as the plane was preparing for takeoff around 12:30 pm.

The pilot of a plane taxiing behind Flight 405, destined for Venezuela, reported fuel was leaking from the aircraft before the fire started about 30 seconds later, CNN reports.

Mike Dupuy, who was on another plane at the airport, tweeted this video of the inferno.

Firefighters used white foam to completely extinguish the flames by 1 pm, according to Daily Mail.

It's unclear how many people were onboard, but all passengers and crew members were safely evacuated by way of the emergency slides.

Daily Mail reports this aircraft model can accommodate up to 250 passengers. Of those passengers, 15 people were hurt, three of whom required hospitalization.

An individual who sustained a burn was the most seriously injured, with the other injuries reported as minor, according to Daily Mail.

Amy Erez of the Broward Health Medical Center, however, told CNN the hospital will likely treat six to 10 people who were on board.

The uninjured passengers were taken to another terminal, but it's not clear when they will be able to get on other planes since the airport closed all runways just after the fire was put out. As of this afternoon, all incoming flights are being diverted to other airports.

The fire will be investigated by the National Transportation Safety Board to determine a cause for the left engine malfunction.

Today's fire took place on an aircraft about 30 years old, and it's reportedly one of the oldest kinds of the Boeing 767 in use.