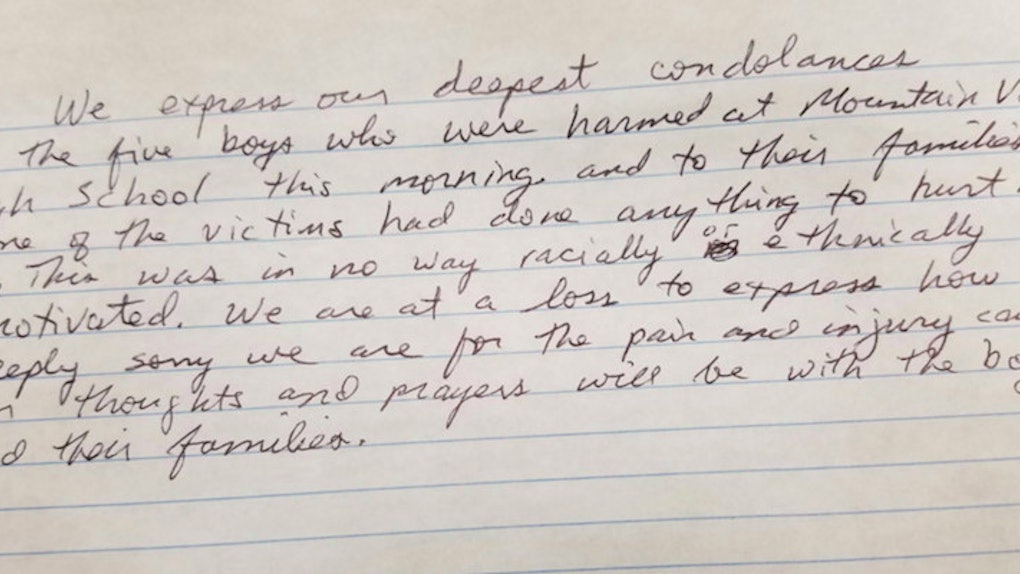 Parents of a teenager suspected of stabbing five students before cutting himself have written an emotional note publicly apologizing.

The 16-year-old student is accused of attacking his classmates in a locker room while they were changing at Mountain View High School in Orem, Utah, on Tuesday.

He is believed to be a straight-A student with no history of violence.

The note was tweeted by Orem Police Department. It reads,

We express our deepest condolences to the five boys who were harmed at Mountain View High School this morning and to their families. None of the victims had done anything to harm him. This was in no way racially or ethnically motivated. We are at a loss to explain how deeply sorry we are for the pain and injury caused. Our thoughts and prayers will be with the boys and their families.

Police released a statement ruling out a racially motivated attack.

The department said the suspect was not a victim of bullying, so the attack was not retaliatory.

A spokesperson said "the victims in this case appear to have been chosen simply because of their proximity to the suspect at the time the incident started," adding,

We all need to realize that today's events affected a lot of people throughout the city. We have five victims but six families that are suffering -- including the suspect's family that was caught totally by surprise at their son's intentions -- let's please remember that.

All victims, as well as the suspect, were taken to the hospital.

The conditions of two are described as "critical but stable" and two are "fair" but none are life-threatening, said Orem Police Department in a lengthy Facebook post.

The fifth has already been released from the hospital.

The Orem Police Department spokesperson concluded the statement by branding the incident as a "tragic, unforeseen event that no one could have prevented."