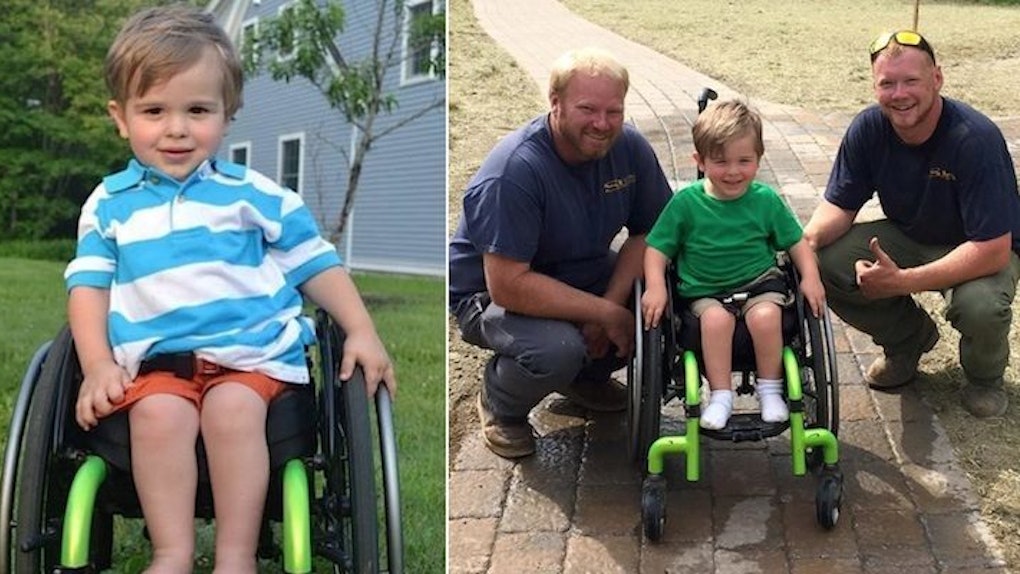 Paralyzed 3-Year-Old Had The Most Heartwarming, Humble Wish Granted

Maine's Kellan Tilton was born with a malignant tumor in his spine and abdomen.

The growth was removed in a 10-hour operation, but its location rendered the now 3-year-old paralyzed from the waist down, according to Huffington Post.

His father, Dan Tilton, told CBS News Kellan can control his wheelchair "better than anybody can drive a car," but still, getting from his home to the family's barn isn't easy.

The barn is Kellan's and his seven siblings' playground during their free time, but Kellan can only go when someone is available to carry him.

That all changed when the Make-A-Wish Foundation asked Kellan what he wanted more than anything in the world in the spring.

Other kids might have wanted to travel or meet their celebrity idols, but Kellan wanted a pathway from his home to the barn.

He could have taken a trip anywhere. For him, what was most important was to be able to go outside and -- as he said -- 'wheel myself from the house down to the barn.'

The 200-foot bridge has only been under construction since the beginning of the month, but Kellan already began enjoying his wish, his father said.

Kellan's mother believes her son requested the bridge, which reportedly cost about $15,000, to be closer with his father, whom she called "his best friend."

The bridge is expected to be completed by this Saturday.