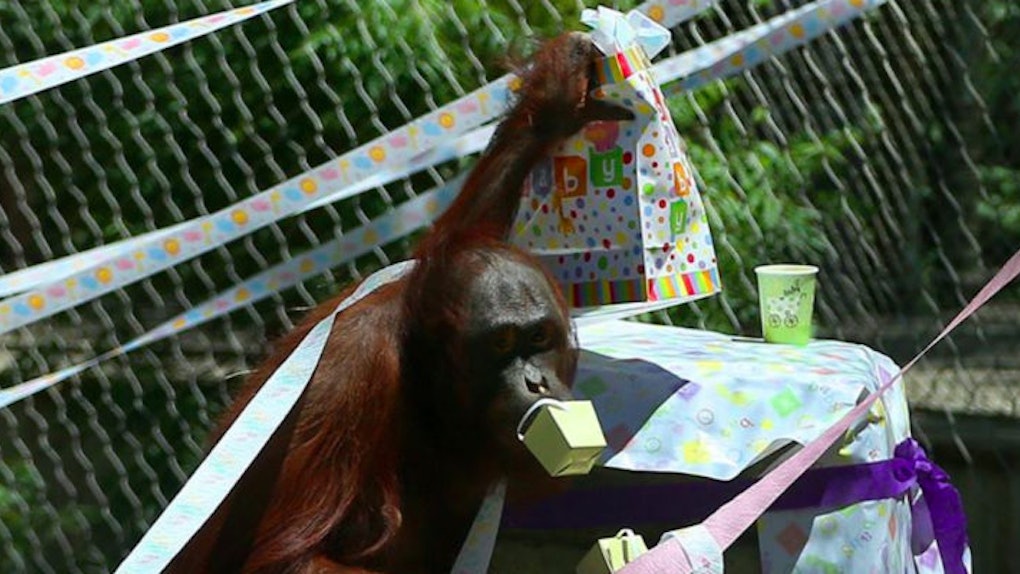 Orangutan Will Have Baby Shower, Is Registered At Target

Having a baby is one of life's greatest miracles or so many Hallmark movies and thrillers about other people abducting other people's children have led me to believe.

Motherhood should be celebrated in all forms, but especially when it comes in the form of an orangutan because OMG they're so cute.

Mei is a pregnant orangutan currently living at Cameron Park Zoo in Waco, Texas, and she's preparing for her bundle of joy by having a baby shower.

The mother-to-be is registered at Target.

Mei and KJ look to be very proud parents.

Mei, 18, and the 28-year-old father KJ were brought to the zoo in 2009 with the intention of their mating, and it looks like this summer/winter relationship finally worked.

Orangutans are the first great ape in danger to go extinct, so the expectation of a baby is super exciting. They also have the longest interbirth period of any land mammal ― so you only get a baby about every 7-9 years and that's if the stars align and you are lucky enough to have no other conditions or issues.

Mei stopped taking birth control in 2015 -- so it was a planned pregnancy, at least on the zookeepers end.

Klutt went on to say,

Everyone is very invested in the excitement of a new little one on its way.  We wanted a way to give everyone a chance to come out and celebrate with the zoo and the parents to be.

Two keepers went to Target themselves to register for the animal-safe gifts.

The registry featured normal go-tos for a new baby, like bedding and feeding items, toys and a few picture books, but also included a GoPro and a Dolly Parton CD.

This just goes to show you, literally everyone loves Dolly Parton.

Mei and KJ will open gifts this weekend in an enclosure the keepers have decorated for the event.

Guests can watch the parents enjoy their gifts while enjoying some cake themselves, just like a baby shower that doesn't involve exotic animals.

Citations: This Pregnant Orangutan Is Having A Baby Shower, Registered At Target (Huffington Post)