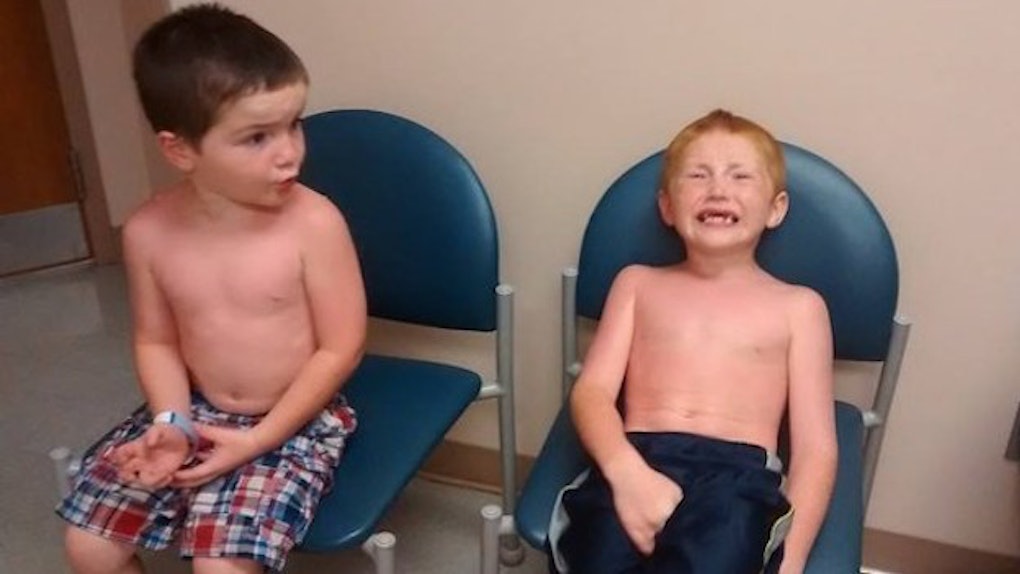 Two children were hospitalized when the sunburns they suffered at an Oklahoma water park turned into horrifying blisters.

Last Friday, the daycare took a trip to a local water park.

The boys' mother, 26-year-old Shaunna Broadway, picked up her boys a little after 5 pm that day to find them badly sunburned and in agonizing pain.

Staff members, Broadway claims, were actually teasing Harvey because he was crying.

According to Daily Mail, staff members explained to her they had run out of sunscreen so the boys were instructed to keep their shirts on. The heat index was expected to reach well over 100 degrees that day.

Her kids, however, reportedly refused to comply.

An investigation confirmed no other children at the facility suffered such severe burns.

But Broadway, who is a single mother, told BuzzFeed,

It was common sense that they shouldn't have been out in the sun all day, even if they wore their clothes...The news was telling us not to be outside.

She called a local hospital only to be told the boys could not be treated until the burns developed into blisters.

Broadway was advised to pick up Silvadene cream and pain medication at a pharmacy, but she said the two "were in pain all night."

On Saturday, doctors at this same hospital cut open her sons' boils and blisters and covered them in cream.

But the pain persisted, causing so much swelling on Harvey's back, breathing became difficult.

Broadway sought more help the next day at Hillcrest Medical Center in Tulsa, where she was told the kids needed to be immediately airlifted to Shriners Hospital for Children in Galveston, Texas.

The burnt skin was removed, but the boys' grandfather told Daily Mail they may undergo skin grafts if their wounds do not heal.

Broadway reported the incident to the local police department and is looking into taking legal action against the daycare.

We are investigating the criminal element of neglect with the Oklahoma Department of Human Services. We've been conducting interviews at the day care, the hospital and with other parents to see if there's anything that leads us to conclude it was neglect or child abuse.

The kids will likely remain at the hospital for several more days.

Citations: A Mom Has Shared Graphic Photos Of Her Little Boys Horrific Sunburns After A Day Care Trip (BuzzFeed), Horror injuries suffered by two brothers who had to be airlifted to hospital after daycare ran out of sunscreen on water park trip (Daily Mail)