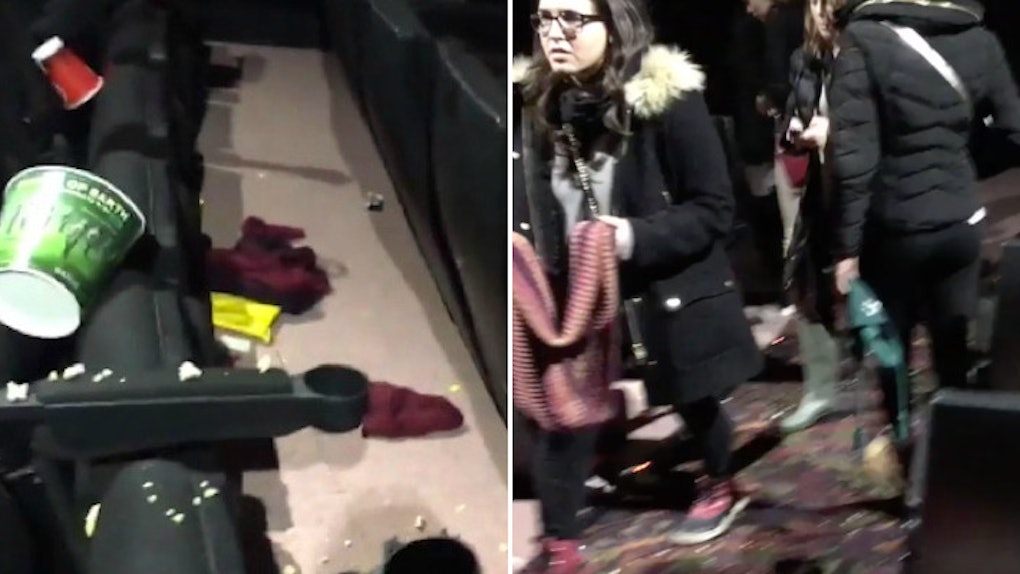 A mysterious man who was heard mumbling at the very front of a movie theater in New York City caused total chaos after people inside the theater suspected he might have had a gun.

Theatergoers had been at Regal Cinemas located at 850 Broadway in New York City. The scare occurred during a 9:20 pm showing of "La La Land." The frightening incident happened at around 11:45 pm on Sunday night.

A man named Spencer Schwartz took to Twitter to describe what he saw just before a stampede ensued due to a gun scare.

A 24-year-old woman inside the theater named Chelsea Grogan also took to Twitter to post about her experience.

According to Gothamist, a theater staffer told the NYPD the man responsible for causing the chaos during "La La Land" had actually purchased a ticket for another movie showing.

The man had reportedly wandered into "La La Land" with just 10 minutes of the movie left. In addition, staffers at Regal Cinemas say there was no mention of a gun by the man himself.

The gun rumor began swirling as people fled the theater.

When I was running down I think somebody said, 'He has a gun.' Four years after Aurora there should be a protocol in place.

A man named Benjamin Gilbert who was also at the theater spoke to Gothamist, saying,

I heard people start to shuffle and move then it was total pandemonium. Literally zero to 60 in three seconds. People were climbing over the seats, pushing each other, [and] a woman screamed the name 'Brandon.' We got to the exit door and people were piling up on a step that was in the hallway and pushing each other.

The good news here is, while some people were hurt during the stampede, there were no major injuries and certainly no deaths. It doesn't look like the mysterious man in question had a weapon, but he was still out of line.

After all, it's not crazy to think most Americans and people all over the world are on edge following recent tragic events.

Theatergoers did say about 30 people were issued a full refund from the theater after hanging around for nearly 45 minutes after the chaotic moment.

They gave it to us without so much as asking us if we were ok.

No arrests have been made by the NYPD as of yet.