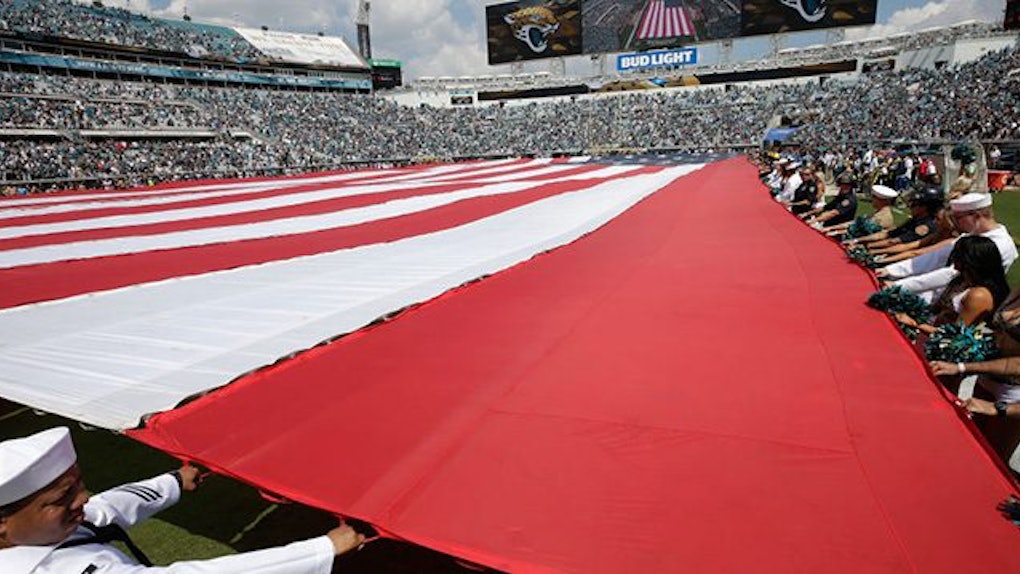 NFL Rules On National Anthem Are Pretty Straightforward, But Clearly Not Enforced

It's not exactly a mystery why anyone would be confused as to what, if any, are the NFL's rules on the national anthem, and how players and staff are advised to conduct themselves during its playing. After all, President Donald Trump has spent the last six days commenting on that very subject in some form. It all began on Friday, Sept. 21, when the president told supporters at a rally,

Wouldn't you love to see one of these NFL owners, when somebody disrespects our flag, to say, 'Get that son of a bitch off the field right now. Out! He's fired. He's fired!'

It continued on Tuesday when Trump suggested the league implement a strict rule. The president tweeted,

The NFL has all sorts of rules and regulations. The only way out for them is to set a rule that you can't kneel during our National Anthem!

Now, you might be wondering, if the president is suggesting the rule be implemented, does that mean rules related to the anthem don't already exist? The answer, like most things in life, is a little complicated.

Are there rules on playing the national anthem in the first place?

As CNN points out, the league's actual rulebook -- formally titled,  "2017 Official Playing Rules of the National Football League" -- does not including any direct mention of the national anthem or the flag.

The NFL game operations manual, however, which advises teams on how home games should be operated, does makes itself clear. The manual very plainly states, according to Time,

Playing the national anthem before the start of NFL games has long been customary, but it wasn't until 2009 that players were required to be out on the field when it was played, according to CNN. Since that has changed, the operations manual also reserves suggestions for player conduct.

Are there rules on what teams have to do during the anthem?

In regards to how players should stand during the anthem, the manual states,

During the National Anthem, players on the field and bench area should stand at attention, face the flag, hold helmets in their left hand, and refrain from talking. The home team should ensure that the American flag is in good condition. It should be pointed out to players and coaches that we continue to be judged by the public in this area of respect for the flag and our country. Failure to be on the field by the start of the National Anthem may result in discipline, such as fines, suspensions, and/or the forfeiture of draft choice(s) for violations of the above, including first offenses.

It's clear that a number of demonstrations from the past weekend -- whether it was players kneeling, teams not being on the field for the anthem or others locking arms -- violated the operations manual.

It's also clear that a violation of the the game operations manual isn't treated as much a violation by the league, in which there hasn't been a hint of disciplinary actions against such gestures since they became more frequent in occurrence.

That's not the case for stipulations in the actual rulebook however. For instance, regarding protests, the rulebook states,

Throughout the period on game-day that a player is visible to the stadium and television audience (including in pregame warm-ups, in the bench area, and during postgame interviews in the locker room or on the field), players are prohibited from wearing, displaying, or otherwise conveying personal messages either in writing or illustration, unless such message has been approved in advance by the League office.

The league has readily enforced that rule in the past, even for the most benign causes. As for what's in the operations manual? Clearly, not so much.