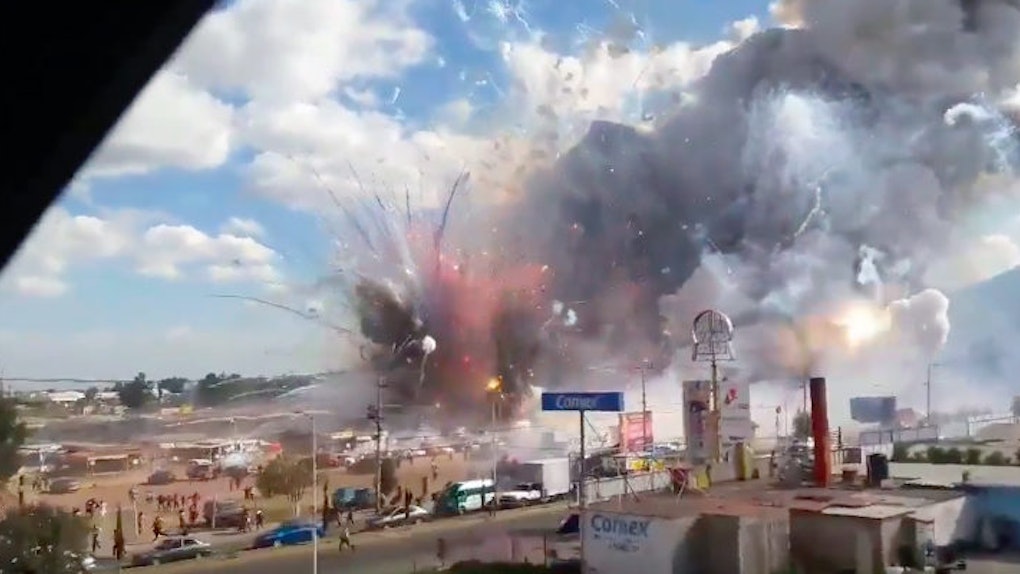 An explosion rocked a fireworks market in Tultepec, Mexico on Tuesday, just 25 miles north of Mexico City. If you haven't seen the intense video yet, check it out above.

As a result, at least 29 people were killed, according to the Governor of the State of Mexico, Eruviel Avila, who spoke to CNN.

Not only that, but dozens of others were injured from the blast in San Pablito Market. According to CNN, the number of people hurt is at least 72.

According to 41-year-old Crescencia Francisco Garcia, who had arrived to purchase some fireworks, the explosion happened around 2:30 pm.

All of a sudden it started booming. I and the others surrounding me all took off running.

Can you imagine having just missed the explosion by a mere matter of minutes?

Thankfully, Crescencia located her family -- her daughter, her son-in-law and her three grandchildren --  just inside the fence perimeter.

According to the Mexican Red Cross, 10 ambulances and 50 paramedics were sent to the scene to deal with the aftermath, which had smoke billowing to the sky and left behind the smell of gunpowder, rubble and ash.

Honestly, the before-and-after of the devastation is enough to send chills down your spine.

Three minors, who suffered extreme burns, have been transferred to a hospital in Texas across the border.

In addition to a few nearby homes in the area being burned, the area still had stray fireworks going off sometime after the initial blast.

Firefighters who arrived at the San Pablito Market tried to douse any remaining fires that were still lingering in the area.

Authorities are requesting that people stay 3 miles away from the scene of the incident so the emergency response can continue unhindered.

I wish all those hurt from this freak accident a speedy recovery and hope emergency responders are able to make safe this dangerous area safe again.