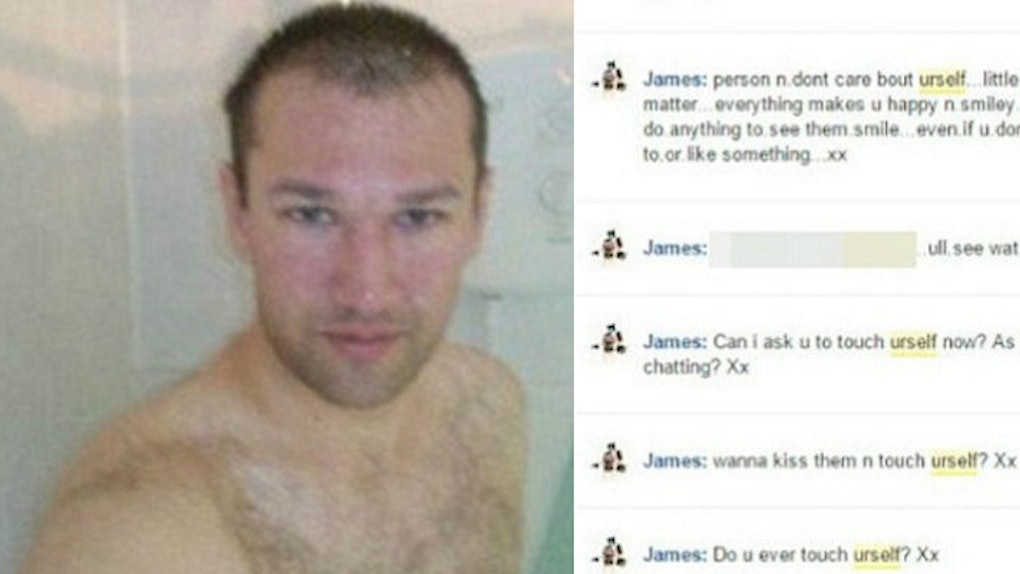 James Hanson, 37, thought he was sharing naked shower selfies with a 14-year-old girl named Ellie on Facebook back in January 2015.

Little did he know, "Ellie" did not exist.

They caught Hanson in the act of sending inappropriate chats to the fake profile.

Apparently, Hanson was persistent in attempting to talk to the fictional female. It's been reported he spent six weeks trying to make contact before he finally gave up and unfriended the girl he believed was a child.

The disturbing chats he sent were documented by the investigation team, who eventually sent the details to the police.

Screenshots from his nauseating messages show Hanson asking the "child" to touch herself in sexual ways.

Before sending a photo of himself naked in the shower, he allegedly asked to "Ellie" to touch her privates.

Other questions he asked included, "Wanna kiss them and touch urself?" and "Do you ever touch yourself?"

Hanson recently pled guilty for engaging in sexual conversation with the fake child last year, and was reprimanded by Judge Julian Lambert at Bristol Crown Court for his crime.

He was also given a two-year community order with 120 hours of unpaid work and 60 days' rehabilitation, according to MailOnline.

Lambert reportedly spoke to them, and said,

There was no child. But the seriousness is there might have been such a child. It came to light by concerned citizens good enough to monitor the internet for people like you.

Although Hanson -- who is also engaged to be married --  was blatantly caught trying to speak inappropriately with a minor, his mother-in-law-to-be defended him.

She allegedly told the court,

He's a great guy, honest and hard-working. This is out of character for James. He is generous and helpful. He'll do anything to help anybody.

Regardless of Hanson's true intentions, he'll be banned from using the internet without someone monitoring him to prevent this situation from happening again.