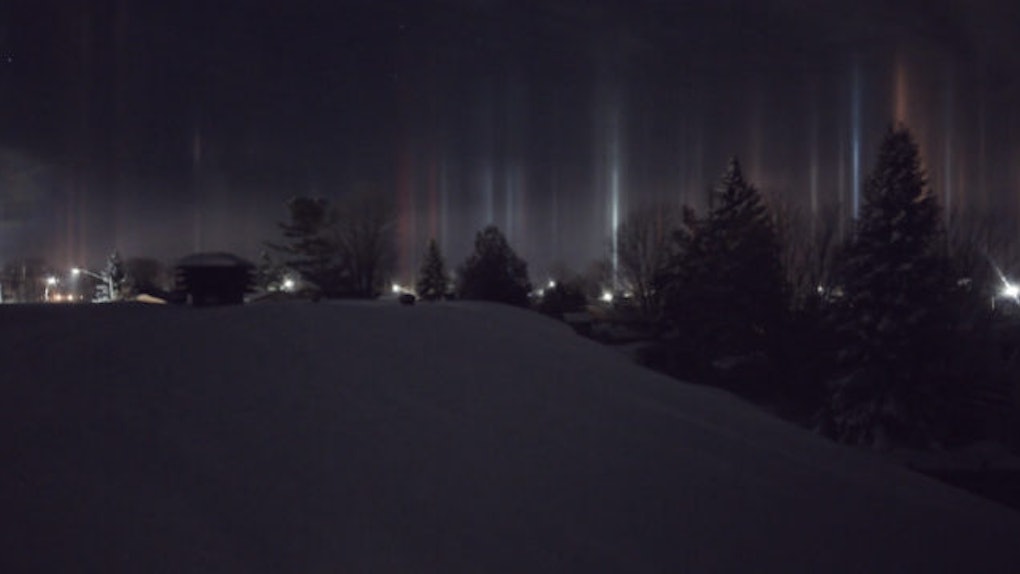 By 1:30 in the morning, most people are either drunk as a skunk or already asleep.

The only exception is probably if you have a child.

Take Ontario, Canada's Timothy Joseph Elzinga for instance. Timothy was taking care of his crying toddler when he looked out the bathroom window.

He described what he saw to Mashable,

I saw beams of light, looking like something out of "Star Trek" or "Close Encounters of the Third Kind."

But it's not aliens -- and it's not the Northern Lights.

Despite originally thinking the light patterns to be the Aurora Borealis, Timothy realized the further he got from the light pollution of his town the less he saw of the phenomenon.

These are light pillars, and it's just how light reflects when it's cold enough and the situation is a bit perfect.

When light reflects off of flat, mirror-like ice crystals, which formed because of water freezing so quickly in the below zero temperatures, the tall columns of red, blue, orange and white appeared.

You can usually see light pillars in polar regions, but they do occur at lower latitudes when temperatures are low enough.

Where Elzinga lives, about 3.5 hours north of Toronto, the temperature hit -18 degrees Celsius. That's  -0.4 degrees Fahrenheit for us 'Mericans.

I ran out in my pajamas and quickly realized that I needed to bundle up.

Timothy documented the light show on his YouTube Channel.

Now, I'm not a scientist, and try as you might to explain these light pillars to me, I will still tell you, without a doubt, they're probably aliens.

YES! I read about light pillars! But thinking is HARD FOR ME.

Yes, it's fine, I will take you to our leader. But let's make it quick before January 20, otherwise I'm going to be really embarrassed to introduce you.