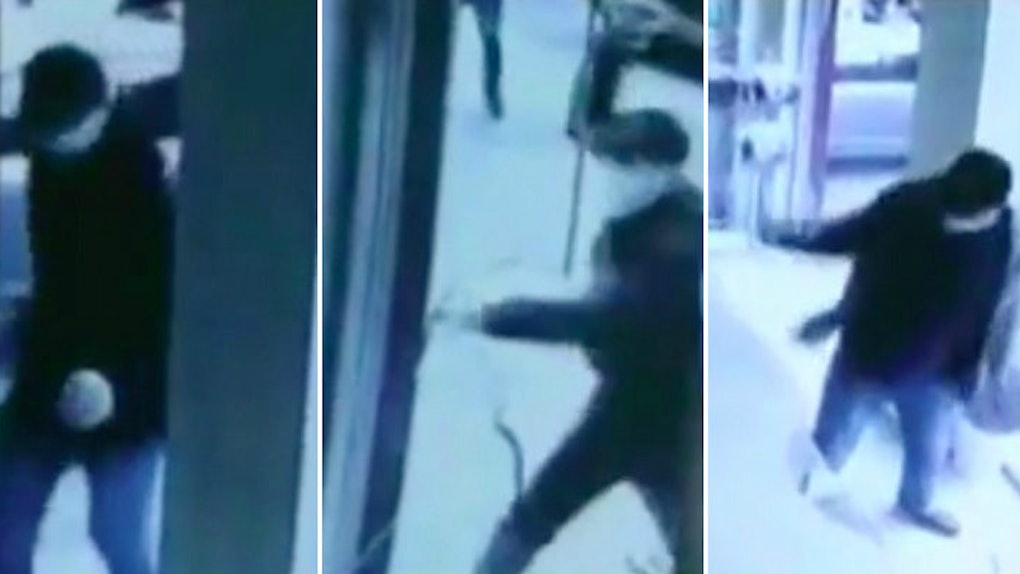 I don't want to be dramatic, but if a laundromat ever destroyed my favorite item of clothing (a member's only Hootie & The Blowfish jacket), I would literally cry until I dehydrated, passed out and woke up in the hospital.

But I would never take a crowbar to the laundromat.

It's not like they destroy clothes on purpose. (Well, maybe they do if they're really rude. When I was a barista, I gave decaf to the rude customers.)

After a laundry shop in Deyang city, in China's Sichuan Province, destroyed a man's Louis Vuitton cardigan, he was so pissed that he and four accomplices busted in and destroyed the dry cleaners with clubs.

He is a suspected gang leader, but I don't know.

What gang leader wears a cardigan instead of a leather jacket or a white t-shirt with a cigarette pack rolled up in the sleeve?

The incident occurred on December 26. He and all four accomplices were arrested the following day.

The five criminals rolled up in a black car wearing masks and holding clubs. They smashed the glass door of the shop and destroyed the counter and some clothing.

Staff said that they had a dispute with a male customer by the name of Yang.

After he complained his black Louis Vuitton cardigan was ruined, he requested compensation. The laundry refused to pay.

Yang left and then returned with four others to bust up the joint. I assume gang members still chew on toothpicks and say "Ey, we'z gonna bust up dis joint, ya see?"

The next day, Yang turned himself in, perhaps racked with guilt for losing his cool over a sweater.

Although, he must have felt passionately enough about it -- he did convince four other dudes to join him.

Imagine that conversation with your gang? "It was my favorite sweat, man! MY FAVORITE SWEATER!" Yeah, I'll risk getting arrested for that.

The investigation is ongoing.

Citations: Shocking moment an angry man leads a club-wielding gang to smash a laundry shop after 'they destroyed his favourite cardigan' (DailyMail.com)