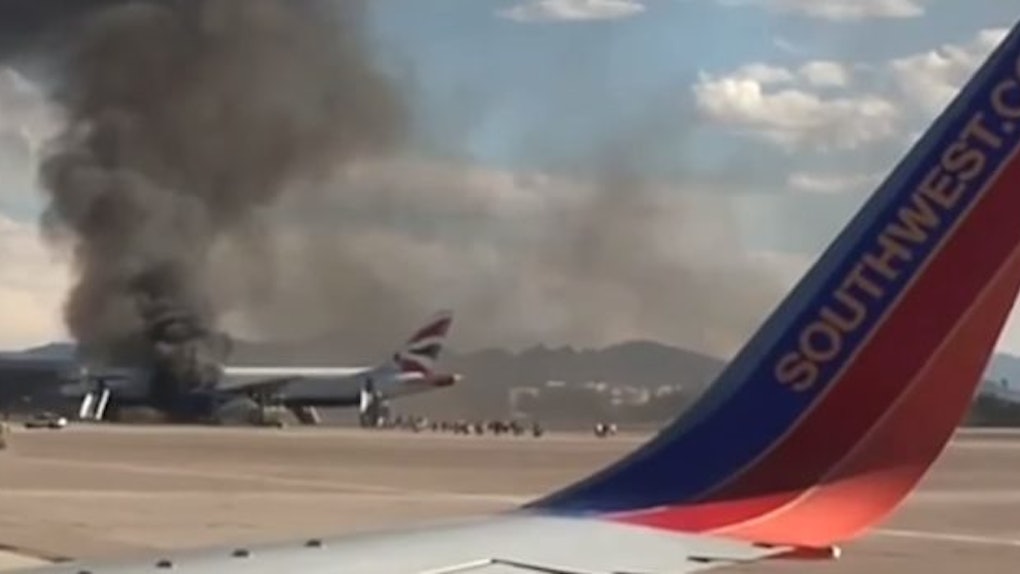 Plane Burst Into Flames On A Las Vegas Runway, 14 People Were Injured

A British Airways plane caught fire as it prepared to take off from a Las Vegas airport on Tuesday.

According to ABC News, smoke and flames burst out from under the wings of British Airways Flight 2276 a little after 4 pm (7 pm EST) at McCarran International Airport.

The Boeing 777 was reportedly moving on the runway and set to leave for Gatwick Airport in England when its left engine caught fire. Smoke poured in as all of the 157 passengers and 13 crew members evacuated the plane via inflatable slides, while about 50 firefighters quickly put out the flames.

The AP reported 14 people were taken to the hospital with minor injuries, the majority of which were caused by bumpy trips down the emergency slides.

The Guardian's Jacob Steinberg, who was on the plane, tweeted:

Was asleep as the plane took off. Came to a crashing halt. Smell of smoke. Initially told to stay seated, then shout of evacuate. — Jacob Steinberg (@JacobSteinberg) September 8, 2015

CNN reported it took just five minutes for the fire to be extinguished and all passengers to be evacuated.

Reggie Bugmuncher, who was waiting at a gate, called the evacuation "a bit more orderly" than she expected, while Paul Berberian, whose flight had just landed, referred to it as "incredibly efficient."

The Guardian reported the visibly distressed captain was met with applause and handshakes from passengers, who were transported by bus to The Orleans Hotel.

The pilot looked pretty shook up to be honest. Has been flying for years, don't think he had ever seen anything like that — Jacob Steinberg (@JacobSteinberg) September 9, 2015

Some incoming flights to Las Vegas from other airports were delayed for over two hours, and two of McCarran's four runways were closed for what appears to be at least two and a half hours.

The cause of the engine fire is yet to be disclosed.