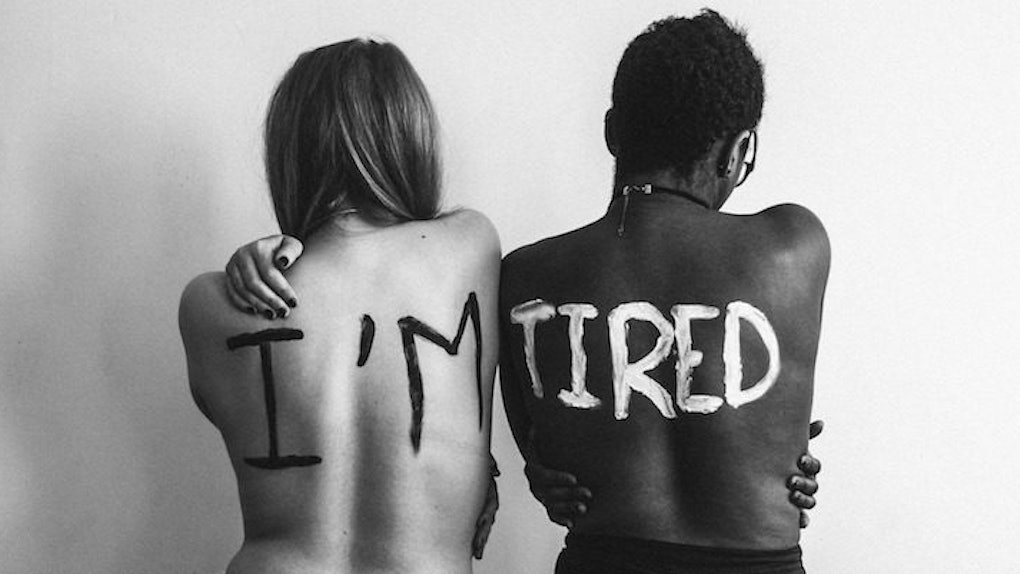 'I'm Tired' Photographs Aim To Show How Harmful Discrimination Can Be

As the rumblings of those tired of suffering at the hands of inequality grow louder and find their way into the ears of a wider audience, a photo project hopes to add voices to the cause in an unorthodox way.

The “I'm Tired” project, created by Paula Akpan and Harriet Evans earlier this summer, consists of a series of black and white photographs in which volunteers from diverse races, creeds and genders pose with their bare backs to the camera.

On the backs of these people -- who "could be anyone" --  are exasperated messages detailing what each person is sick of hearing.

When the photos are posted to the project's Tumblr and Facebook pages, each one is accompanied with a blurb detailing the subject's experience.

"I'm tired of men thinking they have the right to catcall me."In any village, town or city worldwide, females face... Posted by The "I'm Tired" Project on Tuesday, August 4, 2015

As well as racism...

"I'm tired of being the angry black woman. "The media continues to draw on tired and irrelevant stereotypes when... Posted by The "I'm Tired" Project on Thursday, July 23, 2015

"I'm tired of the poor being blamed for the sins of the rich. "The difference between the income and ownership of... Posted by The "I'm Tired" Project on Tuesday, July 7, 2015

We're so often told that many social problems are disappearing: homophobia, racism, sexism, victim blaming, but our subjects, and both myself and Paula, are still facing problems like these on a daily basis.

The University of Nottingham graduates hope the awareness raised by this project will garner a shift in perspective.

If this inspires someone to ask more questions or even for someone to feel more confident in themselves and think 'Hey, there's someone else who goes through this too, I'm not alone,' then we would be extremely happy.

The project garnered over 3,600 followers thus far on Facebook, and with any luck, it'll continue to have success.