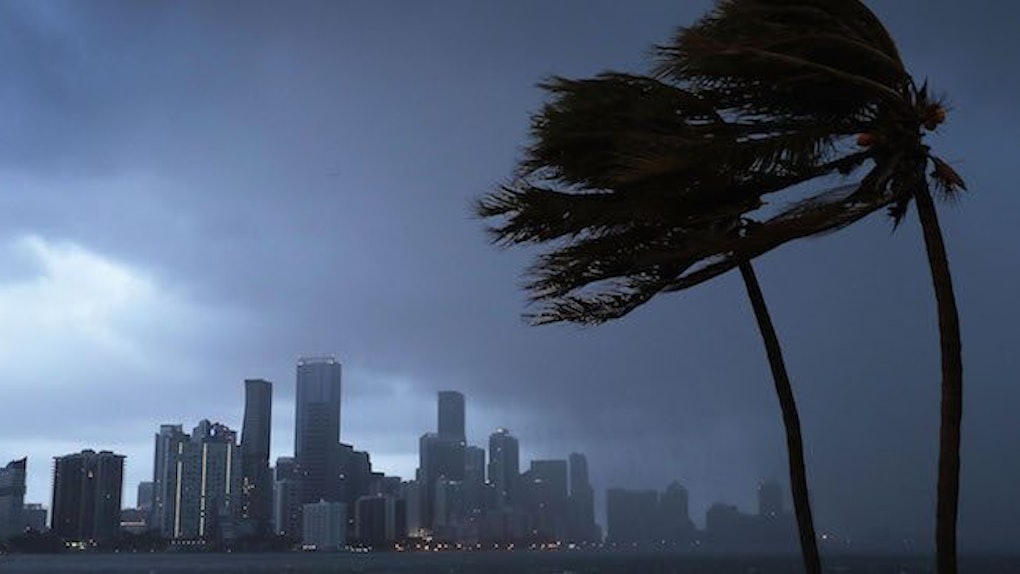 When Will Hurricane Irma Hit Orlando? The City Is Buckling Down For Monday

Hurricane Irma is predicted to slam down on Florida this weekend with a potentially deadly storm surge, pouring rain, and dangerous winds. For residents across the Sunshine State, it's less a matter of if the storm will hit their area – but when.  The city of Orlando is already preparing for Irma, which is predicted to hit really, really soon. However, the question still remains: When exactly will Hurricane Irma hit Orlando?

The first areas that can expect Irma are the Florida Keys and cities dotted across South and Central Florida. The Category 4 storm is expected to hit on Sept. 9, and the Keys could get a whopping 10 to 15 inches of rainfall, according to ABC News. Then, Irma will supposedly head up Florida's west coast, and potentially land north of Fort Myers, as a Category 3 storm.

But when should Orlando residents brace for impact?

As of Sept. 9, there is a hurricane warning for Orlando, Florida. According to the National Weather Service, wind speeds will hit the hardest on Monday in Orlando's downtown area, peaking at 60 mph and then dropping down to 35 mph in the afternoon. Head further west, and the wind speeds could pick up by a few more miles. Orlando International Airport has already announced that it will be shutting down at 5 p.m. on Saturday, Sept. 9.

Tweets from the city show a windy, quiet Orlando with shuttered stores.

Neighbors have been helping neighbors, The Orlando Sentinel reports, with people in need of resources and supplies posting comments on Facebook, Twitter, and neighborhood online communities. Messages were exchanged about where to buy water, flashlights, plywood, etc.

Orlando resident Sandi Morefield told the Sentinel that she wrote a post on her community's site saying that she wasn't able to purchase any sandbags. One day later, two men arrived at her house and dropped off four sandbags. Morefield said,

It was perfect for me. It's really unfortunate that it takes a natural disaster to bring everyone together. But this really restores my faith in humanity, to see people helping other people.

Elsewhere in Orlando, a man traveled to a stranger's house to help her move a grill and outdoor furniture into her home after she posted asking for help. An entire group of employees from a local real estate group also headed over to the homes of elderly residents to help them move heavy outdoor equipment inside. So, there are definitely small silver linings in an otherwise completely tragic situation.

In total, 5.6 million Floridans have already been instructed to evacuated (that's more than a quarter of the state), and everyone from local authorities to government officials are warning residents to take those instructions seriously. Governor Scott released several very scary statements on Sept. 8, according to NBC News, saying that residents should leave "right this minute." He added,

The storm is here. Hurricane Irma is now impacting our state. If you've been ordered to evacuate, you need to leave now... not tonight, not in an hour, you need to go right now.

Should anyone choose to stay, Scott said that they would be doing so “at [their] own risk.” He added that the storm has already cut off power for 25,000 people, and "life-threatening" surges – potentially reaching 12 feet – could hit.

Meanwhile, thousands of people have hopped in their cars and taken to the road, causing gridlock and dangerously low supplies of gasoline. According to The Guardian, the Florida governor said the state will try “aggressively to keep gas stations open and filled,” though ports have already shut down at this point. Whatever supplies are left will reportedly be cut off within hours.

Not that it needs to be reiterated again, but if you're in areas that have been ordered to evacuate, head out now. We hope Floridians are as prepared as they can possibly be, and we're keeping everyone in our thoughts.