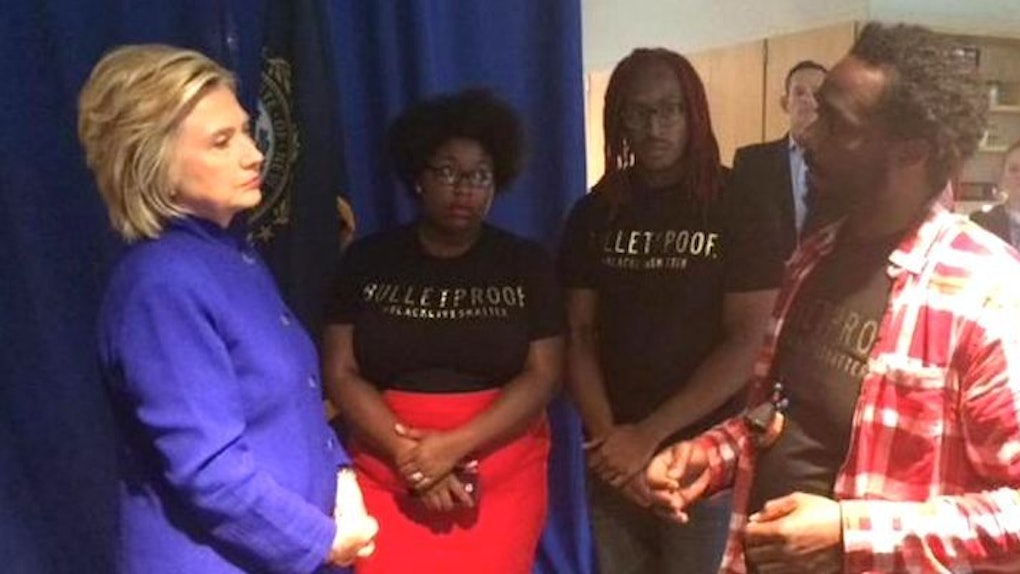 According to New York magazine, members of the Massachusetts-based group intended to interrupt a forum on substance abuse Clinton held in New Hampshire, but the US Secret Service barred them from coming in when the room reportedly reached capacity.

Clinton, however, reportedly agreed to a private meeting with the activists, who watched the event from another room.

Much of the conversation revolved around the 1994 Violent Crime Control and Law Enforcement Act -- an act Clinton, who was the first lady at the time, helped pass.

The bill gave $9.7 billion to prisons, and the activists' questions, along with the corresponding text in the video clip, indicate this was a major reason inmates in federal prisons increased by 60 percent from 1992 to 2000.

In the video posted by GOOD magazine, activist Julius Jones asks Clinton about solving the problems produced by mass incarceration.

Clinton acknowledges his claims about unfair prison practices are true, but she infers the Black Lives Matter movement has yet to name a truly realistic and effective goal when it comes to making a difference.

A second video shows the passionate exchange that ensued when Clinton was asked about changing "white hearts" in regards to racism.

The Democratic presidential hopeful raised her voice to say the most important changes will involve new laws and political systems, not people's hearts.

Yesterday, Jones, along with fellow activist and attendee of the meeting Daunasia Yancey, told MSNBC's Melissa Harris-Perry Clinton's responses were not "sufficient for us."

Yancey added all of Clinton's opponents will soon have to answer the same questions.