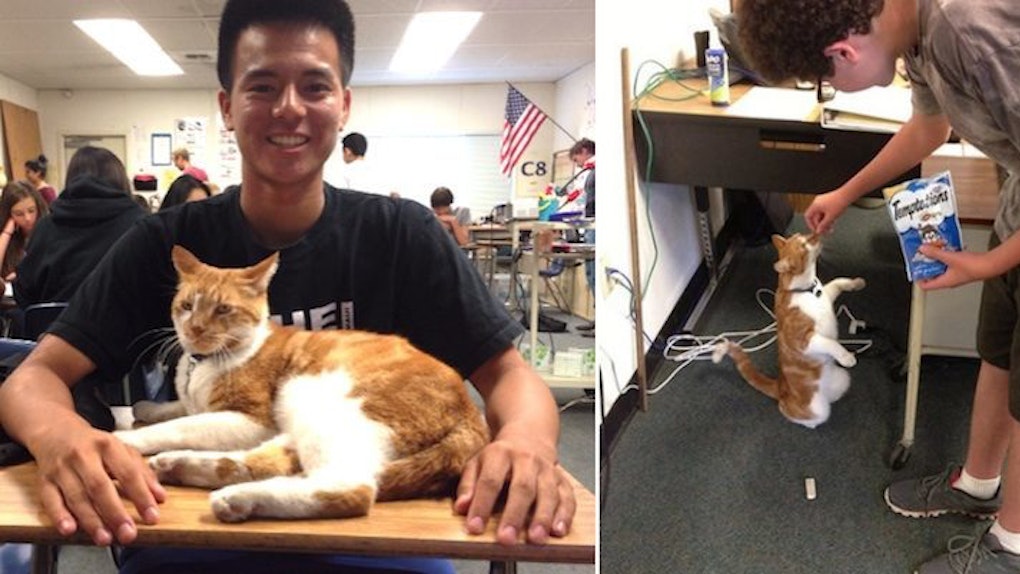 Bubba the cat is an inspiration for other cats thinking, because it's too late or because they're cats, they can't get high school educations.

It's never too late, and you're never too much of a cat to make knowledge a priority in your life.

According to Mashable, when Bubba was first adopted in 2009, his owners said they tried keeping him as an indoor cat, but he quickly made them aware -- through constant loud meowing -- he was a peacock, and you can't keep a peacock from soaring.

Eventually, his owners relented and left Bubba with the ability to mill around the neighborhood freely. While most cats end up getting involved in up-to-no-good feline street gangs when given the freedom to roam the streets, Bubba took the oPRRRRRtunity (yeah, I did) to better himself with a proper education.

Students of Bret Harte Middle School apparently even tried to get a statue erected in his honor, though school officials denied the request.

Bubba was, however, granted a school ID card.

A page set up for the cat gained almost 8,000 followers on Facebook.

The cat's owner, Amber Marienthal, whose sons attend Leland High School, doesn't have a problem with Bubba being allowed to roam the school, though she does fear he is in some danger.

She told Mercury News she once watched him lie down in the middle of the school's soccer field while practice was going on, waiting for someone to pet him.

Last month, Bubba got accidentally locked in the Leland campus for 36 hours during registration before eventually being let out by a security guard who heard his meowing.

Still, Marienthal wants Bubba to be included in school activities; she hopes he will get permission to walk down the aisle at graduation with the class of 2017.

Such an inspiration. I'm excited for the Disney movie, which will unquestioningly have Michael B. Jordan voicing Bubba and Dennis Quaid playing the principal with a secret heart of gold who eventually relents and allows Bubba to march at graduation.

Look for “Bubba: An American Hero” to hit theaters sometime in 2018.