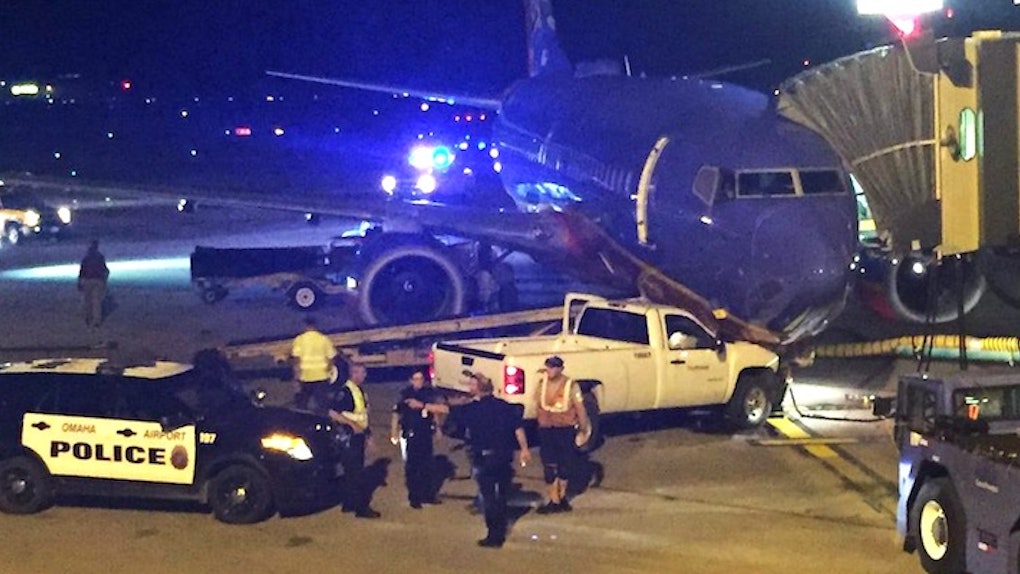 Will our severely troubled world ever be normal? Probably not.

The latest proof stems from a bizarre incident at Eppley Airport in Omaha, Nebraska after a crazed man scaled a fence used to blockade the perimeter of the runway.

Immediately after making it onto the tarmac, the man quickly made his way to a nearby pickup truck on the taxiway and stole it.

The man then drove the stolen truck into a Southwest Airlines plane loaded with crew members and passengers.

CNN reports the Southwest flight was originally scheduled for a flight to Denver, but was delayed and taken out of the flight rotation as a result of the incident. The plane was then inspected for damages.

The man responsible for a chaotic night in Omaha has been identified as 35-year-old Dealario Koonce.

Here's a news clip recapping exactly what went down.

According to the report and airport police spokesman Tim Conahan, Koonce was seen acting irrationally at the south end of the terminal and ran off when police attempted to stop him.

It sounds to me like Koonce totally lost control inside of the airport before fleeing to breach airport security, stole the unattended pickup truck and rammed it into the nose gear of a parked plane.

In an interview with KETV regarding the stunt, passenger Callie Morin said,

I was about to board the plane and something hit us. We all didn't fall over, but it shook us pretty hard.

The good news is crew members only sustained minor injuries from the wild stunt, and no passengers were injured.

Koonce was finally apprehended by authorities and taken to a nearby hospital for medical evaluation.

While wheeling him to an ambulance, news cameras captured this shot.

Either this guy is a flat-out lunatic or he REALLY hates Southwest Airlines.

If it's the latter, all you had to do was send them a tweet, bro!