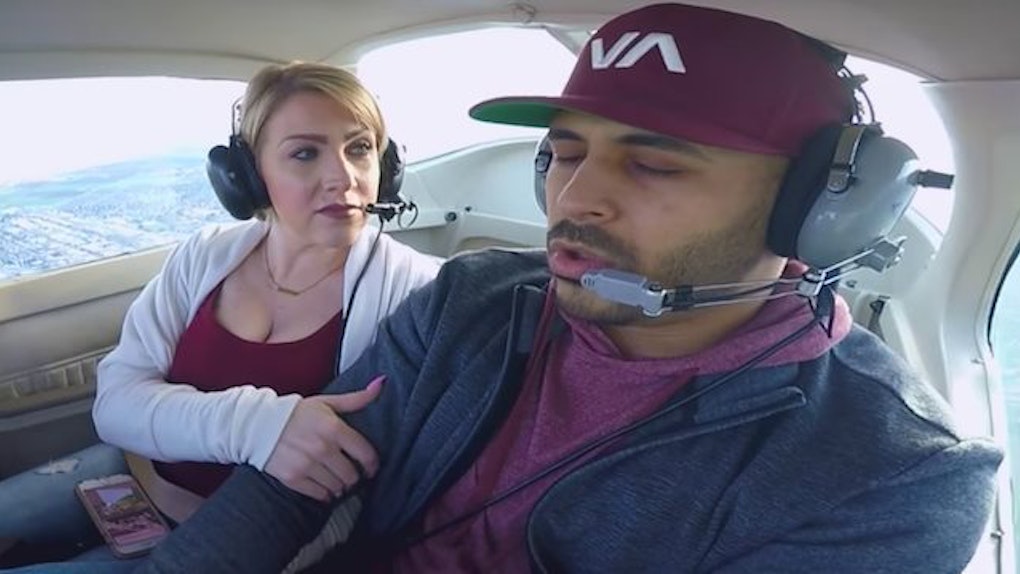 It's meant to be one of the happiest days of your life, and Darrell Hamilton Jr almost, almost nailed it.

In fact, he was completing crushing the romantic gesture, up until the part where he threw up. Everywhere.

Like, right in front of his bride-to-be Rheanna Faye. Not a great look, buddy.

Because he's a hopeless romantic and really wanted to surprise his girl, Darrell arranged for the pair to have a helicopter ride over Reedley, California on February 11, and planned to pop the big question onboard.

But his plans changed when he got motion sickness, and because he filmed the entire thing, you can watch his embarrassing moment in glorious HD! (Don't worry, you don't see any puke.)

About a minute into the clip, which Darrell uploaded to YouTube, he starts looking really uncomfortable, and a caption pops up on the video,

I did not anticipate motion sickness.

Like the trooper he is, Darrell soldiers on, as he and the pilot scan the ground looking for the sign he made for Rheanna.

Suddenly, he ramps up the romance by tapping her on the shoulder with ring in hand.

It's a beautiful moment for precisely four seconds, which is how long it takes after proposing for Darrell to start chucking his guts up.

Like, I get that commitment is scary, but come on man! You didn't even wait for an answer!

Poor Rheanna looks completely overwhelmed and clearly has no idea what to do as she clutches the engagement ring in one hand while trying to look after her man.

But I feel even more sorry for Darrell. You only get one chance at such a big moment, but at least he made it memorable.

And on the plus side, Rheanna said yes. Of course she did — he took her on a friggin' helicopter ride.

In the end, it's actually kinda cute, as they hug each other while Darrell continues to look like he's living through a nightmare.

Which is proof that even love can make a video all about vom pretty cute after all.