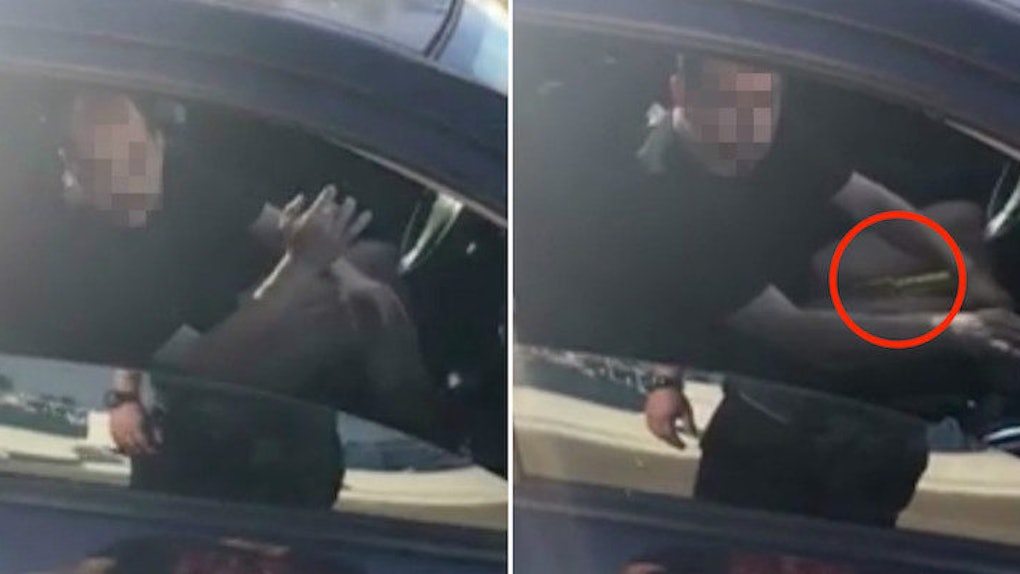 A man has been arrested after a shocking video has emerged that allegedly shows him pleasuring himself with a Fleshlight near kids.

The footage – which is being shared heavily on social media – was filmed in North Shoreline Boulevard, Corpus Christi, Texas on November 26.

It opens with a man carrying his phone face-down, showing his sneakers as he walks toward something.

He then raises the camera as he approaches, and a car comes into view.

The man behind the phone then confronts the guy in the driver's seat.

He appears to not have pants on, and has a golden Fleshlight between his legs.

The man behind the video shouts at the suspect and says there are kids nearby.

The man then swiftly drives off and almost smashes into another car.

One person is heard asking another if they've "got everything," and a woman replies by reading out a license plate.

A spokesman for the Corpus Christi Police Department told Elite Daily the nearest school was about a mile away from the incident. He said,

The incident in that video happened on November 26, 2016 at 3:24 pm on the 800 block of North Shoreline Boulevard. The nearest school is nine tenths of a mile at 924 Winnebago.

Lt. John Chris Hooper confirmed a man has been arrested.

The Corpus Christi Police Department was informed of an individual exposing himself on Shoreline Drive earlier today. Thanks to community involvement and providing us with information, the 38-year-old male has been identified, detained and is being interviewed by detectives. As always, if you see a crime in progress, do not hesitate to call your Police Department.

Indecent exposure is a Class B misdemeanor, punishable by up to six months in jail and a $2,000 fine.