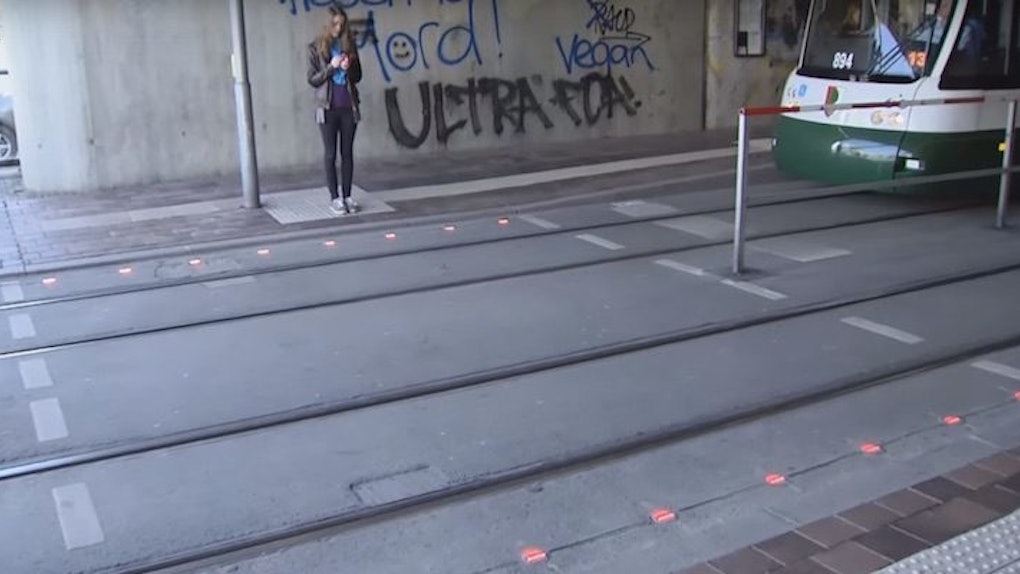 A German city put traffic lights on the ground to prevent smartphone users from walking into oncoming traffic.

According to the Guardian, officials in Augsburg, a southern municipality near Munich, chose to launch the safety experiment after numerous accidents were caused by people who crossed tram tracks while looking down at their phones.

The lights were installed along the curbs at two tram stops, one of which is apparently located near a college, last week.

They flash red when a tram is coming, much like the traditional traffic lights located at eye level.

This video shows the lights in action.

The installation took place one month after a 15-year-old girl was killed as she stared at her smartphone while entering a tram crossing in Munich, Huffington Post reports.

Several crossings in Munich were since equipped with beacons that send warnings whenever a vehicle approaches to smartphone users possessing the Watch Out! app.

Pavement lights have also been installed in three tram crossings in Cologne, Germany.

Once the experimental trial in Augsburg comes to a close, officials will gauge public reaction and determine whether to implement the lights in other tram crossings.

Several US cities such as Portland and Seattle have reportedly attempted to boost smartphone safety by way of “talking” buses that emit audible messages just before they turn.

In Rexburg, Idaho, texting while walking through a crosswalk results in a fine of at least $101.50.

Officials in New Jersey are currently mulling over a similar law introduced last month that could even send offenders to jail.