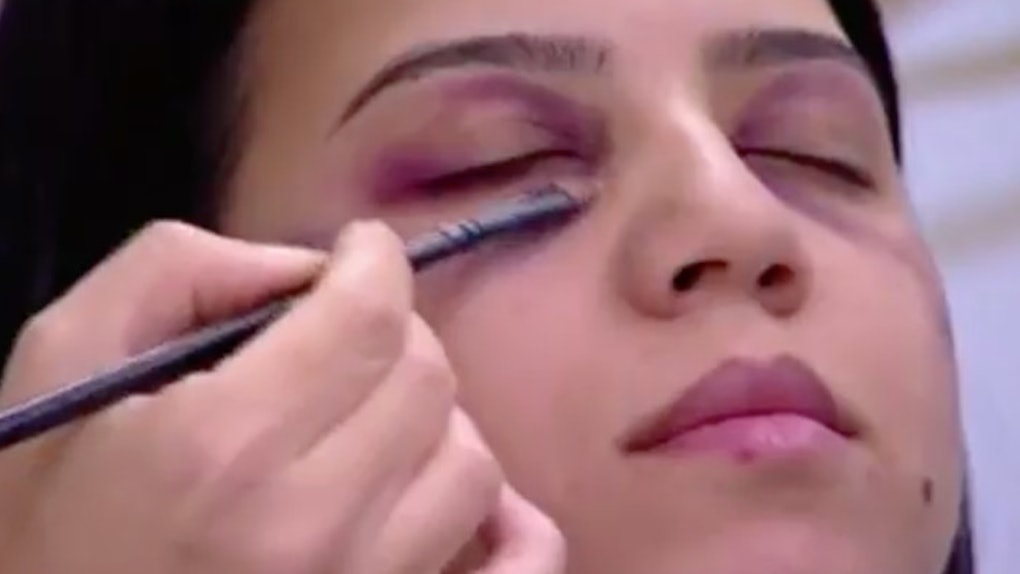 Well, here's something you don't see every day...

On November 23, Moroccan state TV aired a controversial segment on channel 2M that has the internet up in arms.

Moroccan television host Lilia Mouline appeared on an episode of "Sabahiyat" to guide viewers through a tutorial specifically designed to show women how to apply makeup after they've been abused as a result of domestic violence.

The beauty tips offered throughout the segment include those needed to cover up bruises and black eyes.

At one point, Mouline even says (in Arabic),

After the beating, this part is still sensitive, so don't press.

The host then goes on to list a collection of products she'd recommend to best cover up any bruises or wounds that may have developed after being physically abused.

Mouline adds that the model participating in the segment is not showcasing real bruises and that the marks on her face were applied for the tutorial.

We hope that these beauty tips help you carry on with your normal life.

While the overall purpose of the segment is quite alarming, the fact that the International Day for the Elimination of Violence Against Women was just two days before the clip aired does not help.

People are NOT happy about this.

It's not hard to see why so many are outraged by the bizarre segment.

After all, the Mouline seems to be suggesting that the best course of action following domestic abuse is to purchase the best makeup to cover up the evidence and pretend that it never happened.

As a result of the immense backlash following the segment, the television network responsible for airing the show issued a formal apology on its Facebook page deeming the airing of the clip an "editorial error of judgment in view of the sensitivity and the gravity of the subject of violence against women."

In addition to the statement, the network also removed the controversial video clip from its website.

However, these quick fixes weren't enough to silence the people. An online petition was created on Change.org that calls for the High Authority of Audiovisual Communication in Morocco to take proper action against the 2M television network and the "Sabahiyat" show itself.

A portion of the petition reads,

As Moroccan women and as feminist activists in Morocco, and in the name of all Moroccan people, we denounce the message of normalization with violence against women.

The petition concludes that it is unacceptable to "cover domestic violence with makeup." Instead, we should "condemn the aggressor."

While over 62 percent of women are known victims of gender-based violence in Morocco, which might explain why the network even thought such a segment was a good idea to air, it is important that we strive to raise awareness about the subject rather than provide ways for women to literally cover it up.

In other words, we need to stop the normalization of domestic violence, not find ways to cope with it.