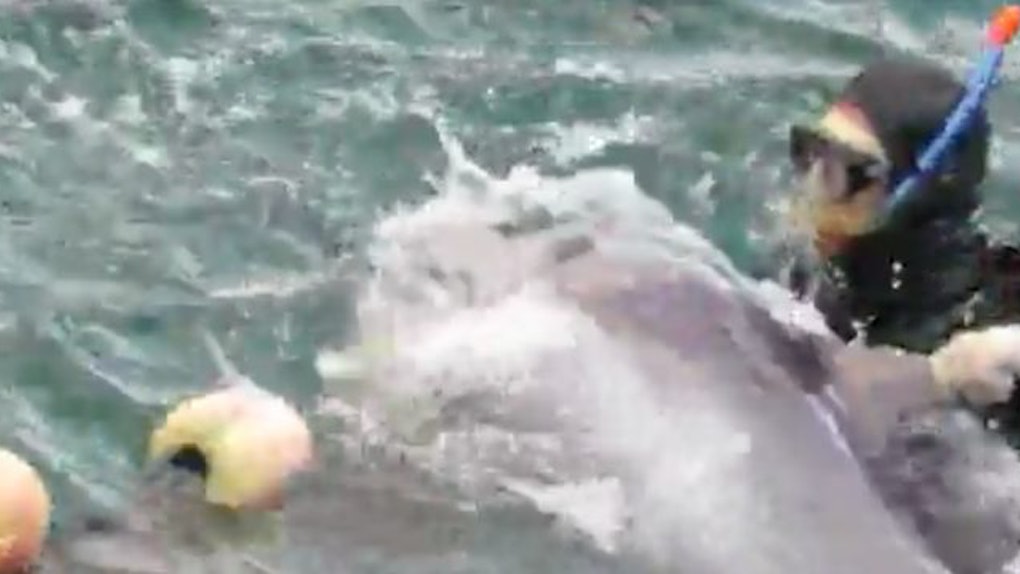 Dolphin Vomits From Stress As Poachers Catch It In Japan

This is the part you don't see at a marine park.

Harrowing footage has emerged showing swimmers capturing dolphins in the wild in order to transport them away from the ocean.

At one point, fear causes a dolphin to throw up as it fights for its life while being manhandled by poachers, according to Liz Cater, who filmed the clip.

It happened in Taiji, Japan, where the shocking practice of rounding up and capturing dolphins is common.

Captors allegedly cornered between 250 and 300 of the animals in a cove on January 19.

Liz said the pod contained “a lot of juvenile dolphins.”

The pod was panicked and they knew they had been separated from their family. In one image of a dolphin you can see it vomiting, and to me this looks like his/her own intestines. This was not the only dolphin captured to be vomiting from the stress endured over five days.

The footage shows the animals' desperation as they try in vain to escape, while swimmers in wetsuits guide them toward a nearby boat.

From there, they were taken to marine parks, it is believed.

The 100 dolphins taken have all now been transferred to small over crowded sea pens where their spirit will now be broken. They will starve them more for a few days, then being the process of feeding the dolphin dead drugged fish shoving pills into the fish prior to feeding dolphins in the sea pen, as well as taking blood from unwell dolphins.

She explained the divers guide the fish to a shallow area because it makes it easier to grab them.

It is believed they are transported in crates to go to parks across Asia, as well as in Russia and Mexico, among other locations.

MailOnline reports this is the second video to surface of the capture in January.

Citations: Panicked dolphins vomit from stress as captors try and snatch them from the waters of Japan to be sent to marine parks all over the world (MailOnline)