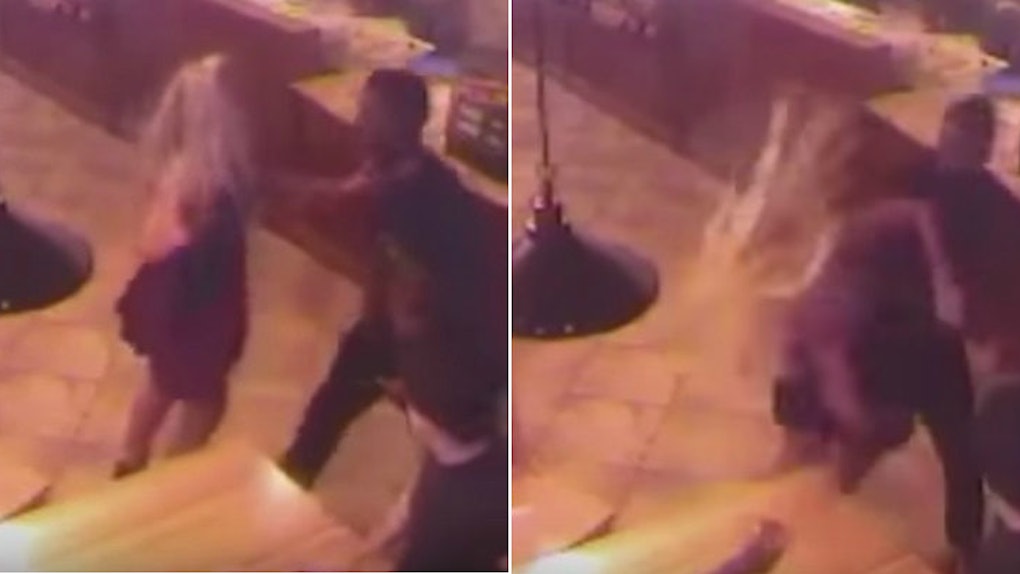 Joe Mixon, 20-year-old football running back at Oklahoma University, punched a female student in the face during an altercation at a sandwich shop in July 2014.

It's been reported by ESPN that he was charged with a misdemeanor at the time and was suspended from the Oklahoma Sooners for the entire 2014 season.

Amelia Molitor, the 22-year-old that Mixon attacked at Pickleman's Gourmet Cafe, suffered from four fractured bones in her face after she was hit.

On Friday, Mixon had his attorney release the surveillance video from inside the shop that publicly reveals him knocking Molitor to the ground.

In the footage (shot from two angles of the sandwich shop), Mixon can be seen walking toward Molito, who is standing at a table inside.

He can then be seen walking up next to her as she hunches over a table at the restaurant.

Mixon immediately lashes back and knocks the student in the face, sending her plunging toward the ground.

After punching Molito, he promptly walks toward the exit of the restaurant, looks back a few times, and disappears from the shot.

It's been reported Mixon was in favor of releasing this surveillance footage.

Apparently, the Oklahoma Association of Broadcasters sued for its access, and the Oklahoma Supreme Court gave the city of Norman until December 26 to either released the video or appeal it.

In a statement regarding the video release, Johnson allegedly said,

Mr. Mixon asked us to once again say he is sorry for the way he acted that night. He has publicly apologized to Ms. Molitor, her friends, his family, teammates, and the University. He hopes that his voluntary release of these recordings will help put this matter to rest.

Mixon allegedly wanted to have the videos released before the deadline so his team wouldn't be distracted when they play in the SugarBowl on January 2 in New Orleans.

On the other hand, Molito's attorney, Rusty Smith, argues Mixon's timing was corrupt. The 22-year-old female went through graduation ceremonies on Friday night, and he believes Mixon could have waited.

Molito's attorneys have reportedly had the videos for a long time, but Smith said they chose not to release them.

Molito is reportedly suing Mixon in Oklahoma City federal court for punching her in the face, regardless of his claims that she was instigating "hostile conversations," and throwing "racial slurs" at him.

The female student's lawsuit against the running back is pending.

However, according to ESPN, Mixon pleaded guilty and has received a one-year deferred sentence, along with counseling and 100 hours of community service.