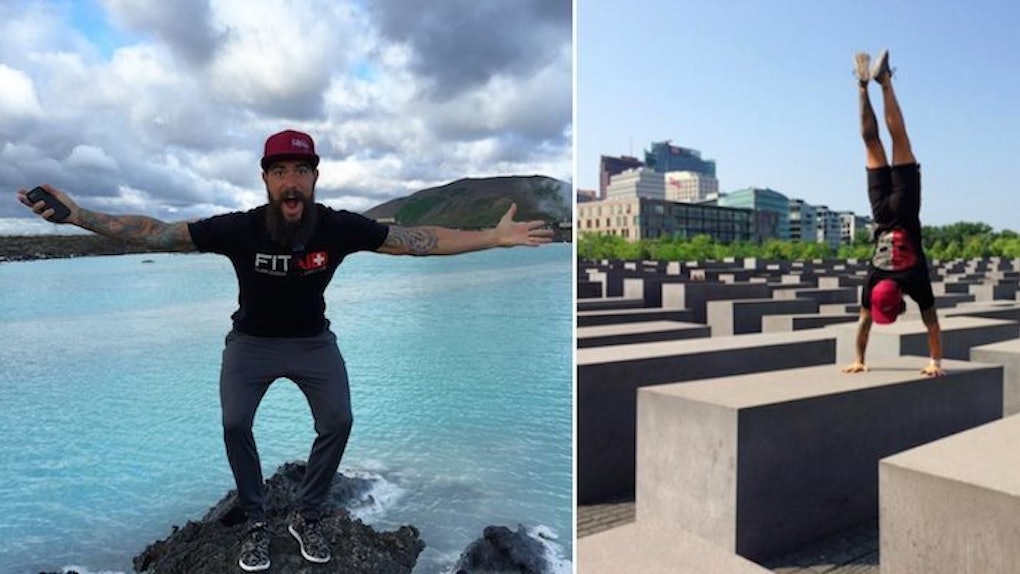 For a second, think about the worst place you've taken a selfie. Really think hard about it.

I bet a bunch of you said stuff like "in a hospital," "in the bathroom" or maybe even "in the car before a funeral for someone you didn't know."

In that case, you are tied for the title of Most Vain Millennial with Dave Driskell.

The CrossFit star is in some hot water after he posted a picture to Instagram (that he since deleted), showing him doing a handstand at the Memorial to the Murdered Jews of Europe in Berlin.

Unsurprisingly, people took offense to Driskell's picture at the memorial and immediately started flooding the post with negative comments.

Some people defended Driskell, saying it was obviously wrong, but he didn't know what he was doing…

…or claiming it actually wasn't even that bad.

Driskell, who is a self-titled “Vagabond,” took down the post after it gained a lot of negative traction, and he realized taking fitness selfies on a memorial to the Holocaust is a comically horrible thing to do.

On Monday, he posted a follow-up picture explaining his actions and apologizing.

I'd like to apologize for any offense the last picture I posted has caused. I had a quick layover in Berlin today with a good friend and we walked all around the city looking at and enjoying all the beauty it has to offer. We walked near this memorial not knowing what it was at the time. People were walking on the pillars. Kids running around. People sitting on them. It was gorgeous and looked visually stunning. As with all things like this I wanted a picture next to it, as I have been doing for years. I took a handstand picture with it as the background. I truly did not know what the structure was. I feel completely terrible as I would never purposely offend or disrespect this memorial had I known. I posted the picture using the wifi from a local cafe and then went back to exploring the city. It wasn't until later tonight at the airport that I realized my error in understanding what this structure was. I've been doing handstands all over the world since I started this amazing wanderlust adventure that has inspired people all over the world. Earlier this year I flew to India to help with a charitable event which raised over $24,000.00 to help the orphans and needy in India. I love to promote fitness and inspire people to do something different than the norm: To be epic. To be fit. To help others. To chase happiness. To show love! I love all and strive to show that through my passions of travel and fitness. Again I apologize for this horrible misunderstanding and any offense this might have caused. Anyone who knows me, knows this is the complete opposite of what I would want. I respectfully ask your forgiveness Dave Driskell.

Let's all just agree to stop taking pictures in front of Holocaust memorials.

It's disrespectful. Think about what you're doing, and remember whom you are embarrassing.

Now if you'll excuse me, I have to go to the Washington Monument, lie down in front of it and take a picture from an angle that makes it look like a penis.