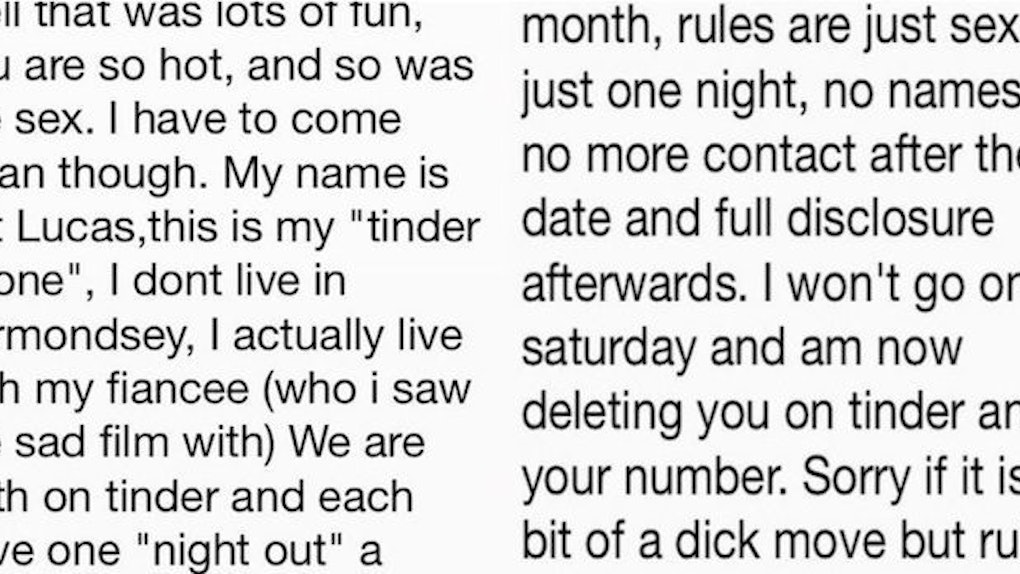 There are as many different kinds of relationships as there are people, and no two partnerships are the same.

That said, this couple has an open relationship like I've never heard of one before, and the story is so good, I had to put it on your radar.

A woman named Cassandra spoke with UK-based paper the Mirror after a Tinder hookup texted her the next morning to inform her -- oops -- he's engaged.

According to Cassandra, the pair found one another on Tinder and met in a bar in London. One thing led to another, and that night, Cassandra and the man consummated their (very) short-lived hookup.

The next morning, her f*ck buddy, who identified himself as “Lucas,” texted her the following:

On Tinder you don't take it, or yourself, seriously, but you have to be honest about what you want, and who you say you are. His reply seemed well rehearsed, and very rude. And the line about 'rules are rules' was as if he thought he was acting like a man of principle. He's probably done this to lots of women. I want to warn other ladies to avoid Lucas from Bermondsey.

I know lots of people engage in open relationships, and that's totally fine, but I'm still having a hard time believing Lucas' story. Maybe his excuse was just a poorly-planned way to avoid having to see her again?

Either way, my douchebag meter is on high alert.

So I recommend doing some research before your Tinder dates, at the very least to avoid the embarrassment of having to explain to your friends how you got swindled by not one, but two jerks.

Citations: This Guy And His Fiance Allow Each Other To Bone One Person From Tinder A Month A Chick He Banged Is Pissed (BroBible)