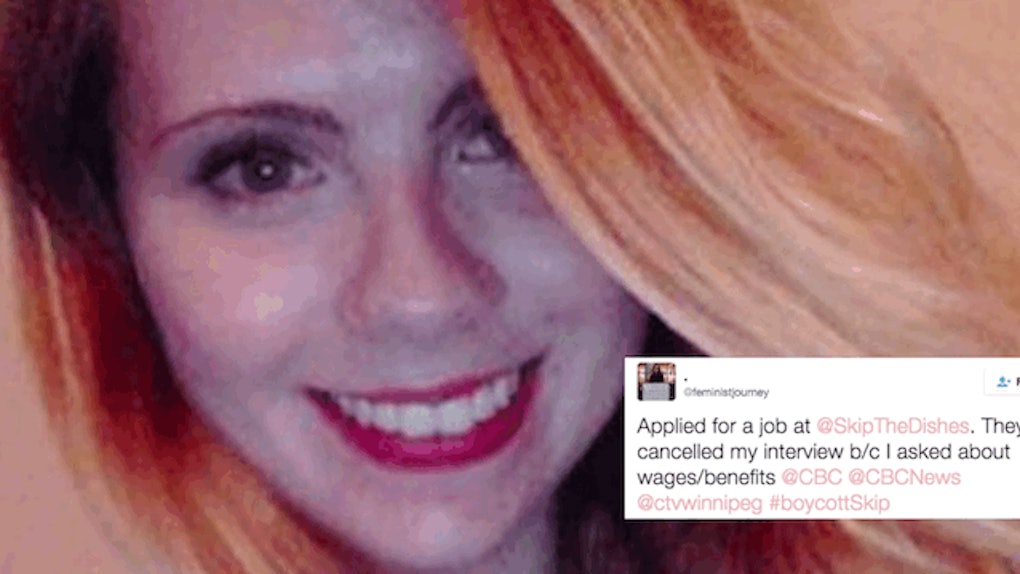 Whether you're a millennial or not, I think we can all agree getting a job in 2017 is tough.

So spare a thought for Taylor Byrnes, a young woman from Winnipeg, Canada, who had a job interview canceled for the most ridiculous reason.

She had already had a phone interview with food delivery service SkipTheDishes for a position in its menu development department.

Ahead of her second job interview, Byrnes decided to check in to ask about wages and benefits before the process went any further.

It was a completely innocuous email, resulting in a massively over-the-top reaction.

She received a response from Talent Acquisition Coordinator, Victoria Karras, who wrote,

Your questions reveal that your priorities are not in sync with those of SkipTheDishes.

Karras then canceled the second meeting.

There wasn't any reason for the sudden cancelation other than Byrnes asking about pay — she even said the initial interview had gone well.

But instead of the company backing down and apologizing, it doubled down.

Karras fired off a second email detailing the bizarre excuse for calling off the interview. She said,

As a startup company, we seek out those who go out of their way to seek out challenges and new opportunities. We believe in hard work and perseverance in pursuit of company goals as opposed to focusing on compensation. Our corporate culture may be unique in this way, but it is paramount that staff display intrinsic motivation and are proven self-starters. For these reasons, questions about compensation and benefits at such an early stage is a concern related to organizational fit.

That's not a great look for SkipTheDishes, and Byrnes knows it.

The company has since apologized and offered Byrnes an interview — for real.

The email sent to Taylor was wrong and does not represent our team's approach or values. We are very disappointed in how it was handled. We do share a compensation package prior to hiring. As soon as we became aware of it on Monday, we reached out to Taylor to apologize for the email and reschedule her interview.

Citations: @feministjourney (Twitter), This Woman's Job Interview Was Cancelled Because She Asked How Much She'd Be Paid (BuzzFeed News)