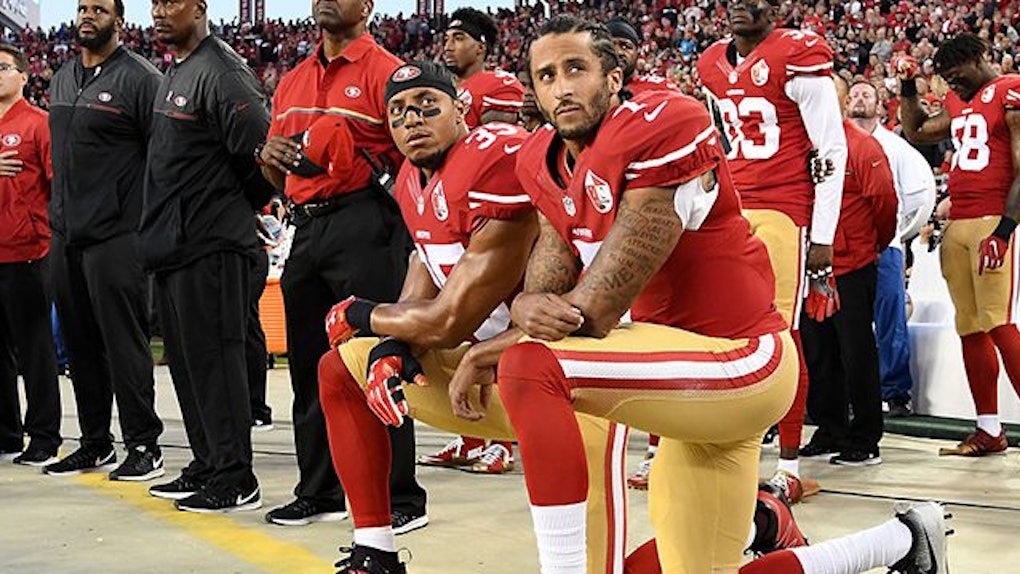 Is Colin Kaepernick Playing Football In 2017? No One Wanted To Sign Him

Since President Donald Trump reignited the national conversation around NFL players protesting during the national anthem, the man who started those protests last year has been relatively silent. While teams and players across the league released statements reacting to Trump's criticism, Kaepernick wasn't among them. That means those who weren't aware of his status since last season, but have noticed his absence, are bound to ask the question: Is Colin Kaepernick playing football in 2017?

After the end of the 2016 regular season, Kaepernick had one year left on his contract with the San Francisco 49ers, but the player opted out of the final year of the deal in March, making him a free agent. Kaepernick made the decision after conversations with the team's general manager, John Lynch, and head coach, Kyle Shanahan, both of whom had been hired after the 2016 season, during which the quarterback began his protests.

Lynch confirmed that during those conversations, there was an understanding that Kaepernick would have been cut by the 49ers. Here's Lynch's exact wording on that matter, per NBC's Pro Football Talk,

Yes [he would have been cut], and we had that conversation with him. So I don't want to characterize it as he made a decision to leave here ... Yes, he was not going to be here under the construct of his contract.  We gave him the option, 'You can opt out, we can release you, whatever.' And he chose to opt out, but that was just a formality.

Since opting out, Kaepernick has been in search of a new team, a search that has been largely unsuccessful. All the while, speculation from NFL insiders and players have attributed his lack of success in finding a new team to the player effectively being blackballed by team owners.

In July, ESPN's insider Adam Schefter said during an appearance on the Mike and Mike radio show,

At the player level, the idea that Kaepernick has been shut out of the NFL because of his protests was echoed by, among others, Green Bay Packers quarterback Aaron Rodgers. Rodgers told ESPN the Magazine before the start of the 2017 season,

I think he should be on a roster right now. I think because of his protests, he's not.

Further, the suggestion that Kaepernick is not good enough was rejected by both Rodgers and Tom Brady. When asked by CBS this Morning whether he thinks Kaepernick can play in the league ever again, Brady said,

I sure hope so. I've always watched him and admired him, the way that he's played he was a great young quarterback. He came to our stadium and beat us and took his team to the Super Bowl. He accomplished a lot in the pros as a player and he's certainly qualified, and I hope he gets a shot.

Kaepernick had stated in March that he would not have protested the anthem during the 2017 season had he been signed by a new team. And as the national conversation regarding protests has reemerged, the player has remained relatively quiet, even on Twitter, where he has largely been retweeting content other accounts, like the clip below for Fox Sports' new show, First Things First.

So, no, for now, Colin Kaepernick is not playing in the NFL. And at a time when disdain for his protest is once again headline news, he might not be playing anytime soon, either.