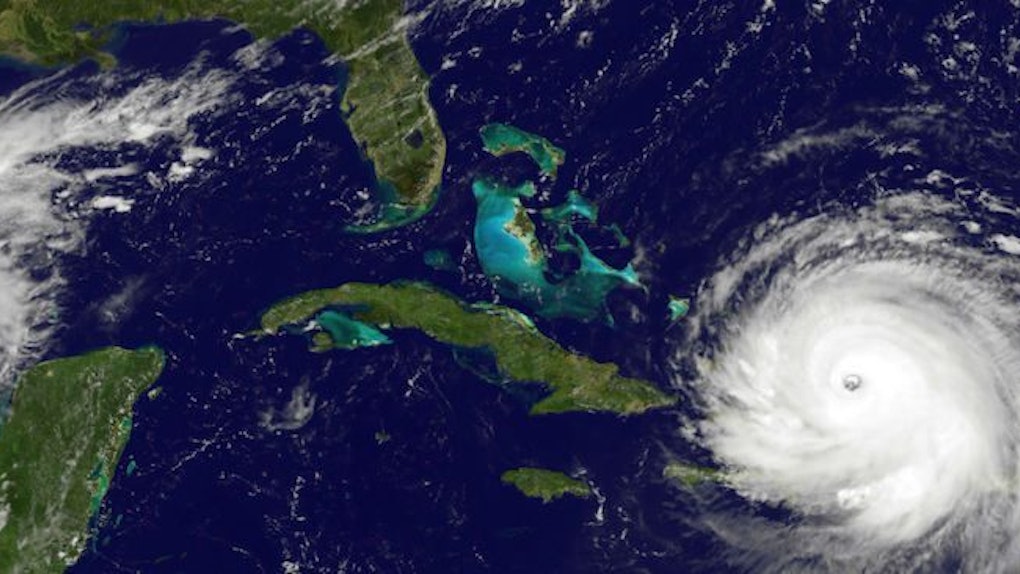 Chelsea Clinton knows that Twitter is for two things, and two things only. Writing snarky, clever clapbacks that make trolls squirm and helping out those in need. Clinton nailed the latter this week, when she took to social media to tweet out some very helpful tips for those in Hurricane Irma's path. And thus we were reminded, yet again, that Chelsea Clinton's tips for Hurricane Irma ensure the former first daughter will forever remain the reigning queen of the Twitterverse.

It's hard not to feel incredibly helpless as Hurricane Irma rips through the Bahamas and makes its way towards Florida, barreling along at a record-breaking 185 mph wind speed. The storm has already claimed 23 lives, according The Guardian, and is causing a potentially historic mass evacuation in Florida. Thousands of people are taking to the roads, many waiting hours at gas stations to fill up their tanks. Meanwhile, residents in Georgia and the Carolinas are already bracing themselves for impact, stocking up on supplies and preparing for possible power outages, major costal flooding, dangerous rip currents, and landslides.

In lieu of posting scary update after scary update about wind gusts, destruction and death tolls, Clinton has taken it upon herself to create a little crib sheet for those who are about to be affected by Irma. The former first daughter has flooded her Twitter feed with resources, including the best phone numbers to call for hurricane preparedness, volunteer opportunities, and locations of shelters. Amidst all of that, she also took the time to very kindly correct someone who accidentally tweeted at her instead of Chelsea Handler, and also disputed claims that she had returned a Nutribullet gift to Bed, Bath & Beyond. But I digress.

This isn't the first time that Clinton has turned her Twitter into a one stop shop for important resources and guidance. During Hurricane Harvey, Clinton tweeted and retweeted pretty much non-stop all of the different ways to help out victims in Texas.  It is definitely difficult not to compare the responses of the former first daughter and the current first daughter to both Harvey and Irma – as unproactive as I know it is.

Ivanka has tweeted exactly twice about Irma, once retweeing her father and once sending out her own message of prayer.

She also tweeted twice about Harvey as well. Are we sensing a pattern here?

There's something so admirable about both Clinton's ardent desire to help, and the proactive way she goes about it. Thoughts and prayers are fine and good – but phone numbers, volunteer efforts and a long, long running list of places to donate are even better.

For those of you who appreciate the list of resources but also miss a good ol' Clinton clapback... she's definitely managed to take some time out to do that as well.

Clinton came down hard on Donald Trump's response to the incredibly tragic ordeal that Texas experienced. The president told reporters,

Can we get a collective "ughhhhhh"? That is quite possibly the most tone-deaf, inappropriate statement you could make at a time like this.

Clinton took to Twitter to add her own commentary to the president's statement, explaining – in the most simple terms possible – that there was absolutely nothing wonderful about what happened in Texas. She wrote,

Moral of the story? The Trumps really don't seem to know how to give proactive, urgent, sensitive statements about national tragedies. Also, Chelsea Clinton has got your back.