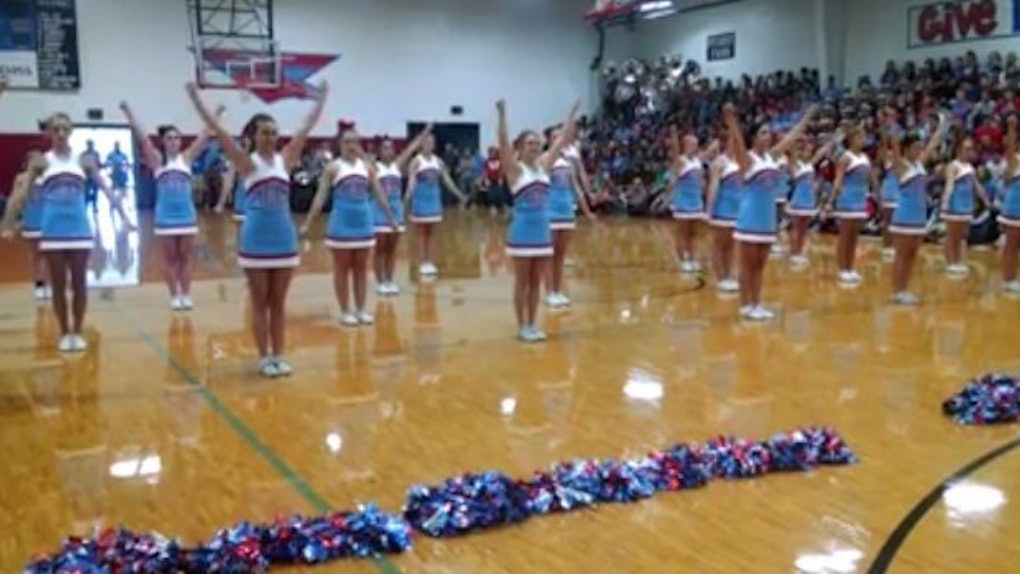 Cheerleaders Receive Praise And Criticism For This 9/11 Tribute Routine

A high school cheerleading squad in Lumberton, Texas is under scrutiny for a video that went viral documenting its annual 9/11 tribute routine.

Every year, Lumberton High School's cheerleading squad performs a routine on the anniversary of the September 11 terrorist attacks. The tradition began in 2002 as a way to remember the victims and honor those who gave their lives to save others.

On Friday, a video of the squad's most recent routine was posted to Facebook.

Choreographed to “God Bless the USA,” the performance included audio with sound bites from various news reports and from a speech delivered by former President George W. Bush.

As the footage went viral, it became evident some viewers were offended by the raw nature of the soundtrack and routine.

Just watched part of a video in which high school cheerleaders did a "tribute to 9/11." America, where tasteless tat passes for homage. — Elaine Liner (@LinerElaine) September 12, 2015

Many commented on the video to reprimand the squad, with some even labeling the routine “tasteless” and “cringeworthy.”

Omg, that 9/11 cheerleader video has to be the most cringeworthy thing I've seen in a long time. Get a clue. — Jess Desserts (@thejessdesserts) September 13, 2015

The majority of viewers, however, praised the cheerleaders and their touching tribute.

Just watched a video of the Lumberton cheer leaders at the pep rally today and holy cow... Y'all are amazing @heatherbstan — brooke. (@BrookeOldbury) September 11, 2015

Squad spokeswoman Lauren Sheffield told E! News the team is "humbled" the tribute made "such a huge impact."

Lumberton cheerleaders that performance was amazing! What a wonderful tribute to the fallen. So proud to be an American!! #NeverForget911 — Sonja (@SonjaB__) September 13, 2015

Watch the powerful routine in its entirety below.