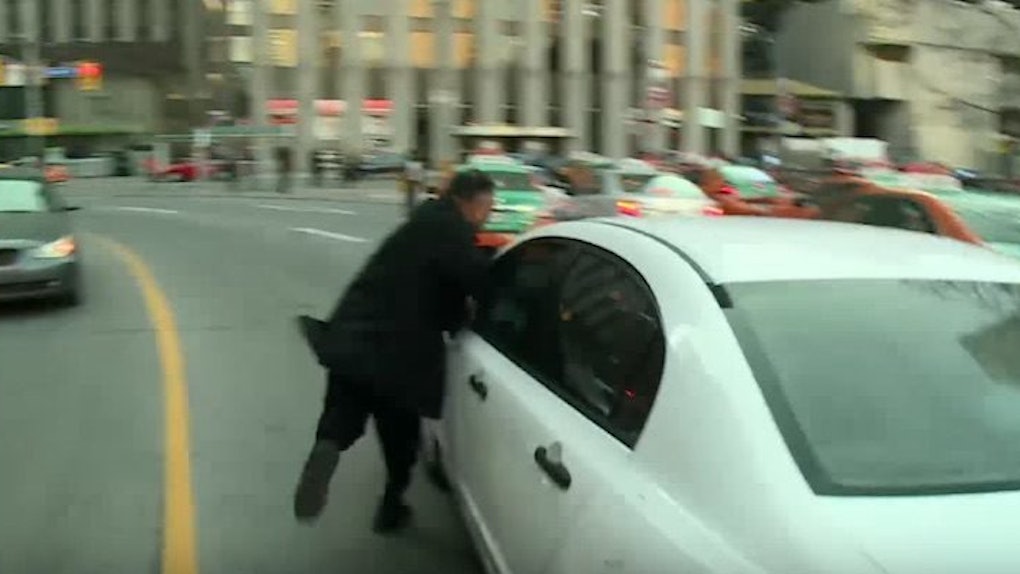 A taxi driver was dragged down a busy street by an Uber driver during a protest against the ride-sharing app.

According to CBC News, Toronto cab drivers halted traffic outside city hall yesterday when they gathered to proclaim Uber is not only decreasing its pay but also breaking city law.

Footage filmed by CBC News showed one cab driver named Suntharesan Kanagasabai banging on the window of a Honda Civic stopped at a traffic light, claiming the car was an UberX.

The Honda accelerated when Kanagasabai tried to open the driver's side door, but Kanagasabai held onto the car and ended up being dragged about 65 feet.

He let go when the car stopped at a traffic light and continued to pound on the window as the Honda drove away.

Kanagasabai then told a CBC News reporter he was trying to prove the UberX driver was breaking city law by driving without insurance.

If someone was stealing your food, how would you feel?

Later that day, Toronto Mayor John Tory asked the cab drivers to cease the demonstrations to prevent interference with commuters.

The Toronto City Council requested in September Uber drivers stay off the road until the council develops guidelines to make sure Uber follows Toronto's taxi and limousine bylaws.

Uber, however, appears to have ignored this request.

Uber Canada told CBC News the best solution to the clash with cabbies is "open collaboration."