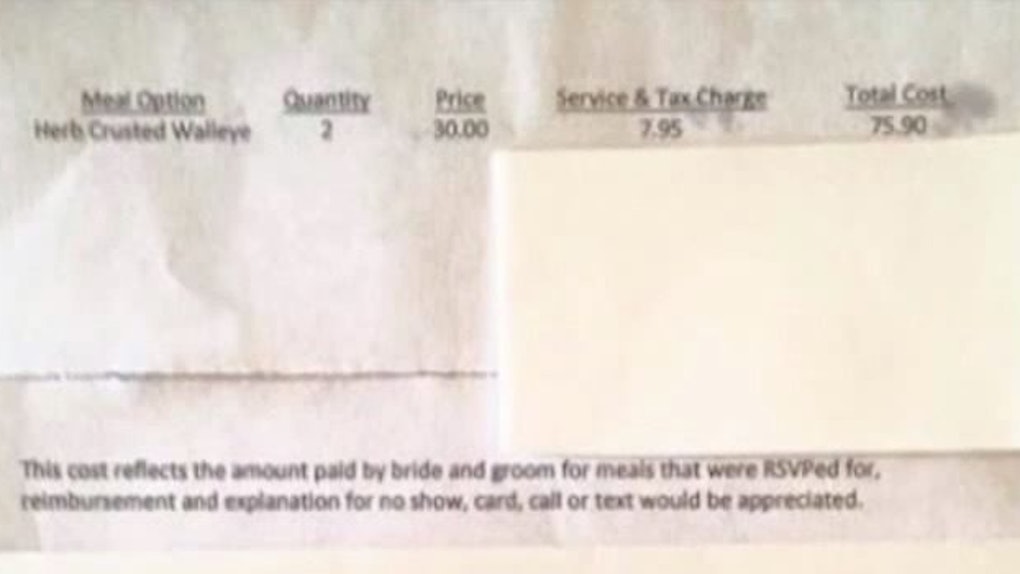 The average cost of attending a wedding is $673.

That number can certainly make many guests think twice about attending.

So, how much does it cost to not attend? According to one Minnesota bride, it's $75.90.

That's the total bill the bride and groom sent to one of their relatives, Jessica Baker, after she was a no-show at their nuptials.

According to KARE-11, Baker and her husband had every intention of going to her relative's wedding, but on the day of the event, her mother called and said she was unable to babysit their kids.

Children were reportedly not invited to the event, leaving the Golden Valley couple no choice but to ditch the wedding.

However, Baker did not inform the bride she wouldn't be in attendance for her big day.

Because the couple did not cancel their appearance, the bride and groom asked Baker and her husband to pay for the dinners they were slated to have.

A Facebook fan sent us this invoice she got for having to miss a relative's wedding because her babysitter canceled on... Posted by KARE 11 on Tuesday, September 29, 2015

Baker described her reaction to receiving the bill. She said,

You've got to be kidding me... It listed, we would have had two herb crusted walleye and there was also a service and tax charge.

Baker added she isn't sure how she could have broken the sudden change of plans to her relative. She continued,

Sarah Baumann Rogers, editor of Minnesota Bride magazine, understands why a couple would be annoyed at guests who fail to show up, but does not approve of sending a bill.

Under no circumstances should you choose to follow up after the fact...kind of questioning why they couldn't attend or much less sending a bill.

When it comes to the cost of weddings, Rogers suggests couples should "prepare for about 10 percent of overage or underage," since catering companies will most likely do the same.

Rogers also said if you must back out of a wedding, it is courteous to let the couple know you won't be in attendance as soon as possible.

Citations: Guest gets bill after not showing up to wedding (KARE-11)