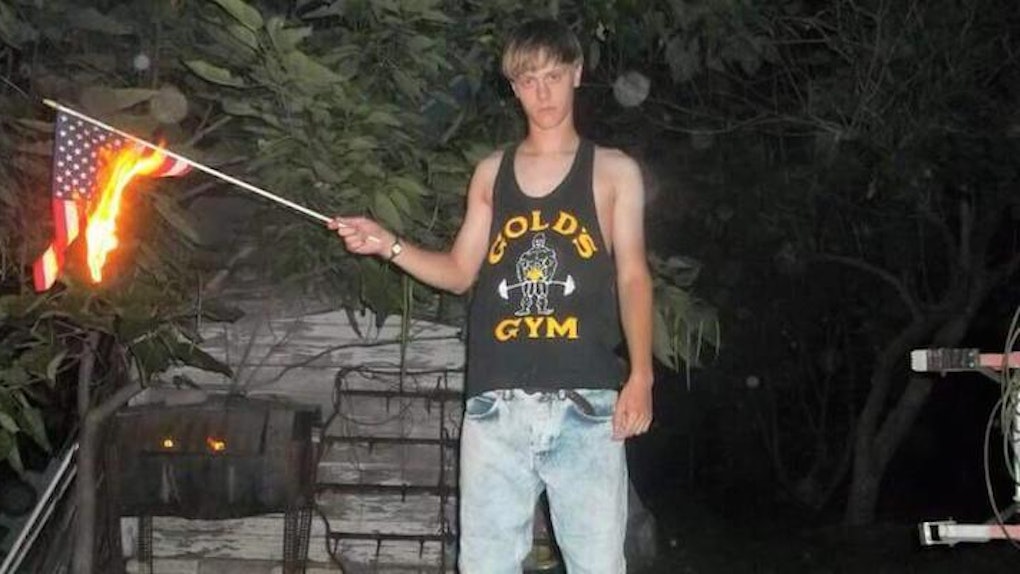 How America Set Up The Foundation For Dylann Roof To Kill

When tragedy occurs, people often refer to the seven stages of grief.

It is through these stages, people say, that we endure.

First, we are shocked; then we mourn, rage, promise and, eventually, move on; we “accept.”

And, most of the time, we pair this solemn acceptance with an empty promise for change, telling us to mend all ills, but never investing anything at all in action.

And so, when the next tragedy arrives, we have nothing left to do but to begin again through this cycle, mourning and raging and promising and accepting without change or absolution.

Wednesday’s tragic shooting in Charleston, South Carolina is another episode of grief.

The murder of nine innocent black worshippers in the Emanuel African Methodist Church has horrified, outraged and deeply saddened most Americans.

It is yet another reminder to black Americans that they are not safe.

And yet, what seems most terrifying is not even that this tragedy occurred, but that more than likely, we will do nothing about it.

Barack Obama expressed not only sadness, but exhaustion in his statement following Wednesday’s shooting, saying, “I’ve had to make statements like this too many times.”

He’s right; too many times he has stood at that podium and preached equality, safety and respect, when each time it is followed by another abnegation of these principles.

Jon Stewart echoed this fatigue, abstaining from comedy to express his own disgust with America’s consistent lack of action in response to outright racism.

There is no denying the motivation behind Dylann Roof’s attack.

He entered that church “to shoot black people,” he said so himself. But America’s own arrogance leads us to deny this basic reality, and so we accept and move on from another tragedy without analyzing, understanding or attempting to mend the source.

The harrowing reality of what happened in Charleston is we created it; America created Dylann Roof.

We live in a country where one in three black men between the ages of 18 and 30 are under criminal supervision (in jail, prison, on probation or on parole); where more African Americans today are in the criminal justice system than were enslaved in 1850.

Slavery may be gone, but institutionalized racism persists; it has merely changed form into something more discreet.

It is shown in the disproportionate imprisonment of African American males, the subsequent felon disenfranchisement laws, new voter ID laws and the list goes on.

Dylann Roof is the product of two American cancers, a deadly combination between cultural racism and the availability of guns.

We have raised children to believe in hatred and discrimination, and we then put a gun in their hands, just as we did Dylann Roof.

And then, when tragedy occurs as a result of these institutions, we dismiss the racism that lies at the core of this violence and choose to lament, accept and wait for the inevitable tragedy that will come next, emphasizing the deranged nature of the individual rather than the culture that created him.

The first is to take guns out of common hands, the second is to address the cultural component of Roof’s beliefs, thus preventing the creation of more men like him.

Without changing the cycle of grief that defines each American tragedy, we are always waiting for the inevitable next time.

There will always be a next time because we will continue to create these individuals, perpetuating inequality and hatred inside them and then putting a gun in their hands.

There can be no more ignoring the realities, no more denying the existence of racism or the frequency of gun violence that, as Obama pointed out, is unparalleled in other advanced nations.

Obama said Thursday that eventually, America must come to terms with the relationship between the availability of weapons and mass violence.

And the time should be now, before we move on without mending the deeper problems that created this tragedy.

While Dylann Roof may have acted alone, he is not alone in his mission, his intentions or his easy ability to access weapons.

By pretending that what happened in Charleston is an isolated case, a lone wolf plagued by mental illness, we guarantee this injustice will reoccur.