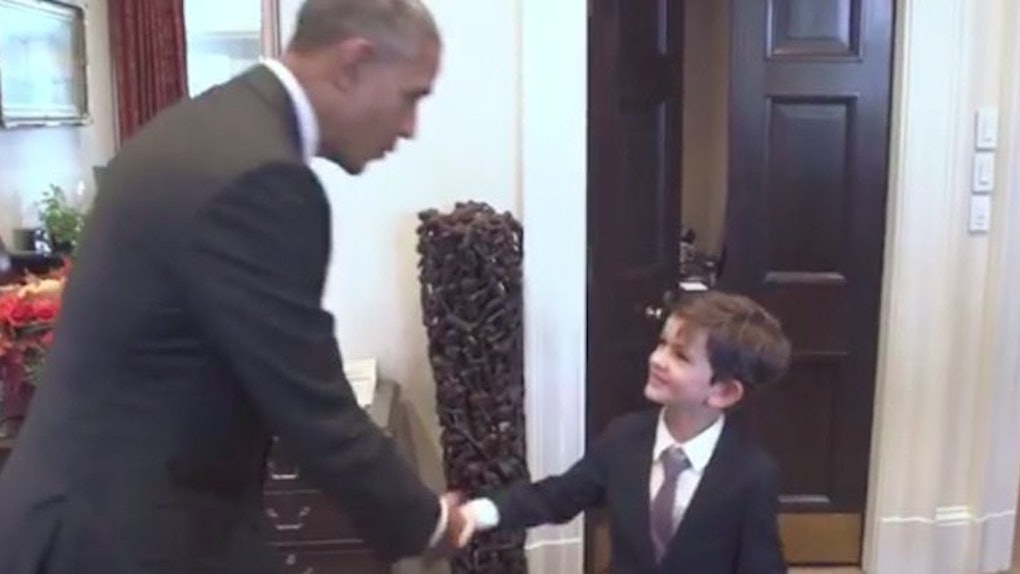 Thursday, November 17 was a monumental date for Alex, the 6-year-old boy who wrote a heartfelt letter to President Obama in September about befriending a Syrian refugee.

It was the day he put on a dapper new suit and made his way to the White House with his family to meet the president for the first time ever, and boy was he excited.

The White House's Instagram account posted a video of the first few moments they met, and it's sure to bring a tear to your eye.

When Alex walks into the room, he reaches out to shake President Obama's hand and stares at him in awe.

He's definitely playing it a lot cooler than I ever would.

As per usual, the president is warm and welcoming, and immediately compliments Alex on his new suit. I can only imagine his extreme internal excitement.

In the video, President Obama sits down and comments on the touching note Alex wrote to him about inviting a Syrian refugee into his home.

I liked what you wrote so much that I ended up reading it to everybody. You being so nice, and kind, hopefully makes other people think the same way. So I was very proud of you.

Alex's letter to the president described how he would welcome a Syrian refugee into his home with open arms, and how he and his sister would help him learn, grow and play.

Apparently, President Obama was so moved by his words that he quoted his letter at the Leaders Summit on Refugees in September, according to Mashable.

Alex was highly impacted by an image shared of Omran Daqneesh during Syria's civil war before addressing the president.

In the harrowing photo, the 5-year-old boy sat bloodied after an air strike, completely emotionless.

Alex's compassion toward Syrian refugees like as Omran is inspiring.

Maybe, if we're lucky, there will be a seat in the White House for him when he gets older.