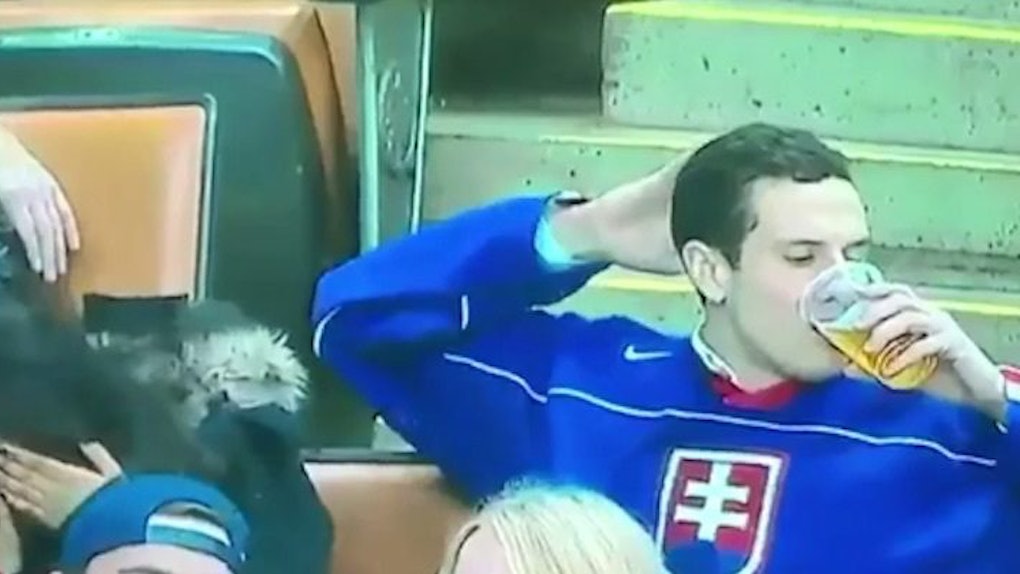 BF Chugs Beer Instead Of Kissing GF On Kiss Cam

I'm no expert when it comes to sports — or any type of sporting event for that matter — but I do know that kiss cams are not to be reckoned with.

During that "special" time of night when the camera pans the audience in search of its next victim of humiliation, you better hope you have a guy or a gal next to you who's going to want to make out for hot sec.

But if you're sitting next to your boyfriend or girlfriend, don't sweat it! Give 'em a quick smooch and move on with your night.

Apparently, a Slovakia fan at a hockey game would rather chug a glass of beer than kiss his bae on camera, which quickly proved he's pretty much the worst boyfriend ever.

The slightly embarrassing Vine was shared on Twitter on Wednesday, December 28, and it has quickly gone viral.

In the footage, the kiss cam focuses in on the couple, and we see the beer lover's girlfriend is ready to snap a selfie of their hockey make-out sesh.

Just as they both realize the spotlight's on them, his girlfriend hides for cover — and if you're a chick (like me), you know she was hoping he'd kiss her anyway.

But, nope. He looks like a freakin' deer in headlights and takes to his beer instead.

After giving the glass a kiss, he takes his hand out from behind his girlfriend's back, puts in behind his head and starts chugging away.

Is that supposed to be funny?

Should I, like, put myself in a dude's position and watch the video? Because if I were a boy whose girlfriend was sitting next to him at a hockey game, I wouldn't refuse a kiss or two.

The lesson here is that time you're featured on the kiss cam and you're sitting next to your boyfriend or girlfriend, freakin' KISS HIM OR HER! IT'S NOT HARD!

Citations: Bro On Kiss Cam Neglects His Girlfriend And Takes An Entire Beer To The Face In Tender, Heartfelt Moment (BroBible), Slovakia fan at #WJC2017 kisses his beer instead of his girlfriend on the kiss cam (Twitter), Vine