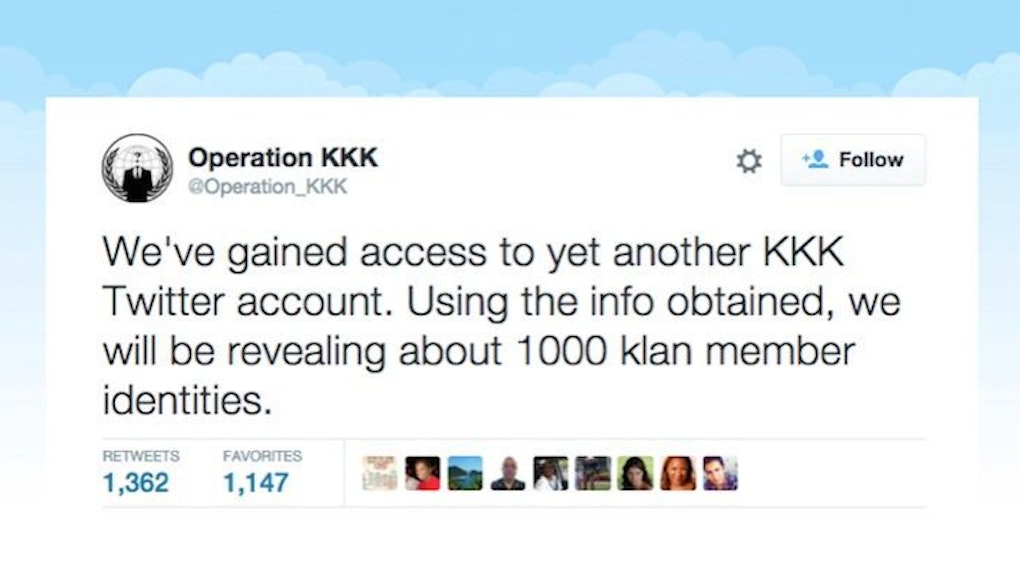 Anonymous Is Starting To Reveal Specific Details About KKK Members

According to Huffington Post, last week Anonymous issued a promise to reveal identities belonging to members of the KKK, which the online collective has been feuding with for nearly a year.

About two week ago, Anonymous also promised to shut down any website expressing support for the white supremacists.

A statement from Anonymous published on October 27 reads,

Ku Klux Klan, we never stopped watching you. We know who you are… We never said we would only strike once... After closely observing so many of you for so very long, we feel confident that applying transparency to your organizational cells is the right, just, appropriate and only course of action... You are more than extremists. You are more than a hate group. You operate much more like terrorists and you should be recognized as such. You are terrorists that hide your identities beneath sheets and infiltrate society on every level.

The International Business Times reported a small amount of the compromised information was published on the Pastebin website.

It seems that phone numbers of KKK members are on the internet. https://t.co/XFmxjIQKQb — Anonymous (@YourAnonNews) November 1, 2015

Anonymous reportedly confirmed the rest of the identities will be published on Thursday.

The information available now, however, is yet to be verified and the International Business Times received no connection after dialing some of the phone numbers.

One source told the IBT one exposed identity belongs to a member of a group consisting of the descendants of Confederate soldiers but not the KKK.

At least one official KKK Twitter account reportedly responded to the leak by calling for the hate group to hold a rally within the vicinity of Anonymous' Million Mask March on November 5.

Anonymous allegedly launched Operation KKK in November of last year in response to the KKK's threats on those protesting the death of the black 18-year-old Michael Brown in Ferguson, Missouri.

The hackers then claimed to have infiltrated the KKK's Twitter account as well as numerous KKK websites just days after Operation KKK began.

After their identities surfaced, numerous KKK members reportedly quit the group, which currently consists of an estimated 3,000 to 5,000 members.