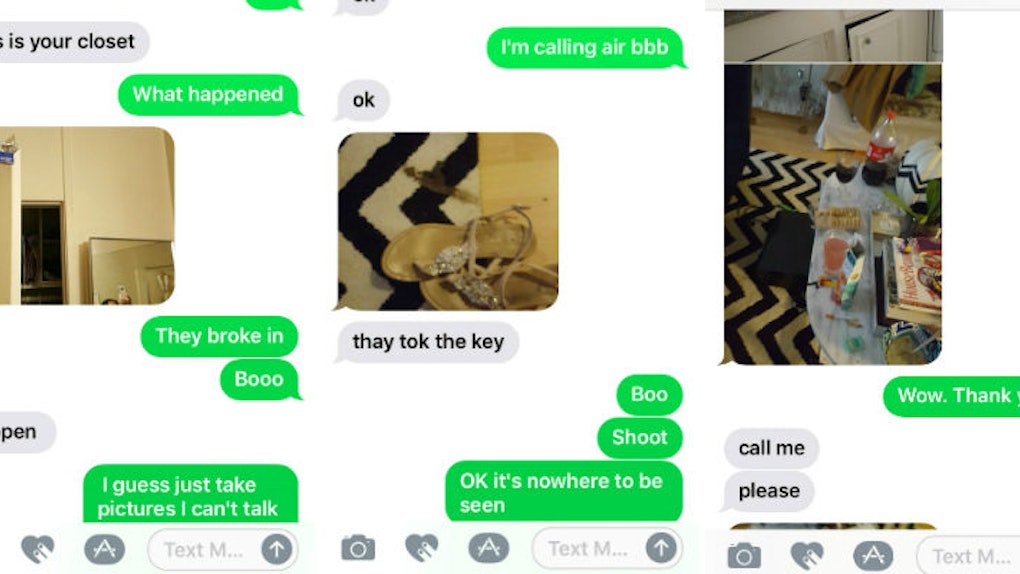 Airbnb Host Robbed Of $40K Worth Of Jewelry, Vibrators

One Airbnb host had to deal with users' biggest fear. A guest stole over $40,000 worth of belongings, and the thief let their dog poop all over the host's apartment as if to add insult to injury (or poop to rug carpet).

Amy Cheapho has been living in her LA apartment by Runyan Canyon for the last four years, and last summer, she began offering up her apartment on Airbnb.

So far, she's had 60 Airbnb guests stay at her place and for the most part, she's had nothing but good things to say about the experience. In our phone interview together, she said,

It's a great supplement, you know, extra income.

However, prior to last week's nightmare scenario, Amy has only had one bad experience with a guest. She added,

I've had one problem before, but I realized every time I had a problem is when it's been instant booking.

No, "instant booking" isn't a revolutionary library service of the future (that I'm totally trademarking), it's a feature of the site that doesn't "require approval from the host before" the listing can be booked, according to Airbnb.

Well, last Sunday night, Amy received an instant booking from a girl named "Britney" who told Amy that her parents were going to stay over and that she “loved the place, it's perfect.”

Amy added that in hindsight, Britney's actions were a little suspect. Amy said,

One question she did ask was how she would get in… And I said, 'Oh, I will buzz you in, and I'll have the door open, and the keys will be there.'

Around 9pm, Amy buzzed her in with her phone while over at a friend's house (SCIENCE!), and while Britney took over an hour to respond to Amy's text asking her if everything was OK, Britney eventually responded,

All of the above adjectives seem right out of Trump's lexicon, no?

Of course, this is when Britney became downright suspicious AF.

A few days later, Britney extended her stay by two days, but then her credit card was declined. However, Britney offered up the excuse that the requisite funds were currently being transferred (an alibi that I used throughout my early 20s).

That Friday, Amy's housekeeper entered the apartment and found it to be an absolute disaster zone. According to Amy, her housekeeper was completely shocked and kept Amy updated, saying things like,

Here's the text message exchange between Amy and her housekeeper.

I never thought I'd be saying this, but get ready for dog shit!

Aside from the dog shit all over her apartment, Amy had to deal with the fact that she had been robbed of over $40,000. When asked what exactly was stolen, Amy responded,

Everything. I mean they stole everything from my extra computer that has all my writings and all my backup stuff on it to my grandma's rosaries to my vibrators to the quarters I leave for my housekeeper to all my purses… Like $40,000 worth of stuff.

Items that were also taken include a box that had all of Amy's important paperwork (including her tax returns), her car keys and her passport.

Someone has even tried opening credit cards in Amy's name online, which she thinks was done “probably from my apartment or computer.” DOES THIS NIGHTMARE EVER END?! I'VE SEEN GREEK TRAGEDIES THAT ARE LESS OF A (LITERAL) SHIT STORM THAN THIS.

Now, Amy fears that since her car keys have been taken someone will steal her new 2016 Volkswagen Jetta.

While Amy informed Airbnb of the theft on Friday, the company offered to send an adjustor within 24-48 hours and as of Wednesday morning, that adjustor had not arrived to assess her claim.

What makes matters even more problematic is that the receipts requested for her missing items were in the box that was stolen. Amy said of her disappointment in Airbnb's response,

There's no checklist: 'This is what you need to do.'

And when she told the authorities and filed a police report, the cops said that this happens “all the time.”

However, Amy "still wants to believe people are good" and says that despite all that's happened, she's still planning on continuing her Airbnb business. I just hope they find Britney or whoever this thief really is and bring her to justice.