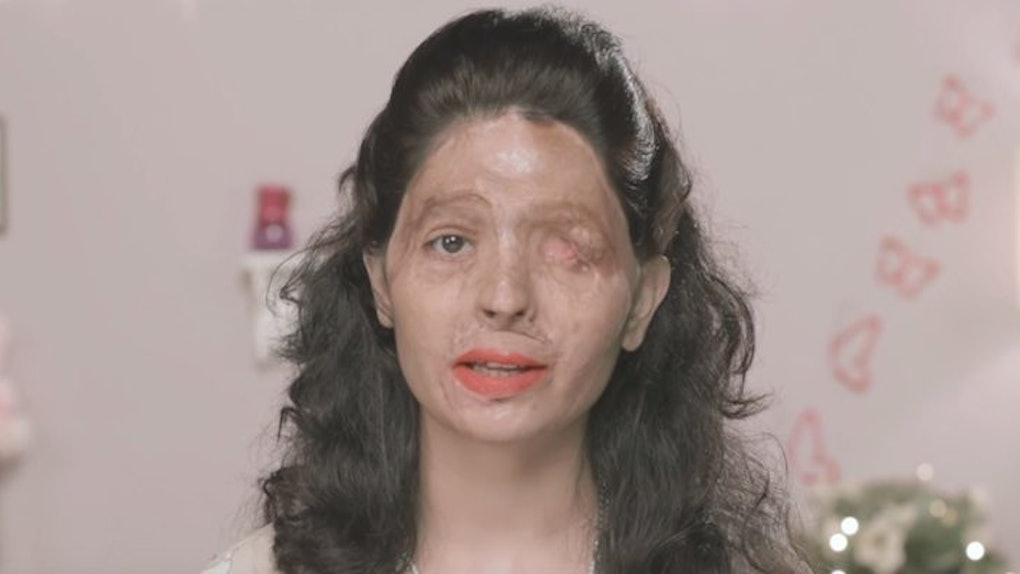 Though the 18-year-old can show viewers how to expertly line their lips to attain the perfect pouts, Reshma also asks those watching to join a cause close to her heart.

In May 2014, the Mumbai resident was allegedly attacked by her brother-in-law and his relatives with concentrated sulphuric acid.

Reshma’s sight was drastically affected. She lost her left eye, and the attack brutally infected her right. The rest of her face was left unrecognizable from its former self, forcing Reshma to surgically correct the damage.

In her tutorial, Reshma explains dangerous acids are just as accessible in India as common beauty products, and she hopes viewers will sign the Make Love Not Scars petition to get these acids taken off the market.

On MLNS’s site, the petition’s organizers shared harrowing statistics about these acids in a letter to the prime minister of India, the minister for home affairs and the chief ministers of all states/union territories.

India witnesses as many as 1000 cases of acid attacks every year (source: BBC). The number of acid attacks increased between 2012 to 2014 by an alarming 250 [percent]. It remains one of the most horrifying forms of gender based violence with almost 90 [percent] of victims being women.

The concerned citizens behind MLNS, like Ria Sharma and Bharat Nayak, wanted to make certain -- considering the amount of violence already faced by women on a daily basis -- disfiguring acid will be taken out of the equation.

To sign the petition, go to Make Love Not Scars and watch Reshma’s video to hear from a survivor hoping to protect other women from experiencing the same terrors.