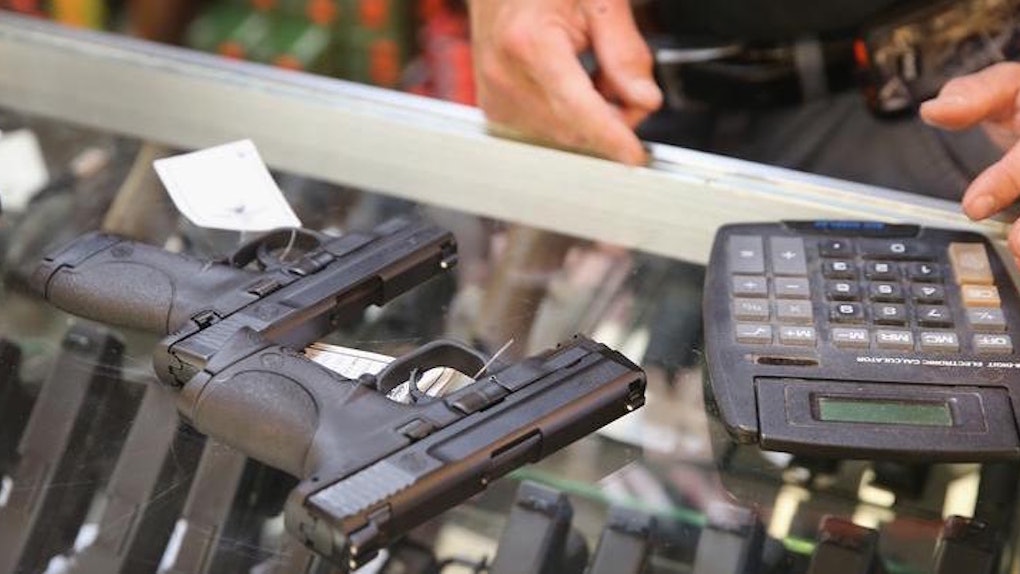 3 American Pro-Gun Arguments That Have Been Debunked

Yesterday, at least 14 people died and 21 were wounded in a tragic mass shooting in San Bernardino, CA.

This is a heartbreaking problem largely limited to the US.

As Think Progress reported in October:

Countries like the UK and Australia have tightened laws on gun control and largely eliminated this issue.

By contrast, the US has continued to weaken its gun laws, despite a recent Gallup poll showing that the majority of Americans support having stricter laws on gun sales than there are currently.

It seems obvious that an overhaul of our laws on gun control is long overdue, but many people are still resistant for a variety of illogical reasons.

Here’s why their arguments are flat out wrong:

However, they seem to miss the fact that having stricter gun laws doesn’t uniformly ban gun ownership altogether.

It means banning weapons like semi-automatic assault guns. In fact, this legislation was actually put into place from 1994-2004. Since the expiration of the Federal Assault Weapons Ban, the number of mass shootings per year has doubled.

While this could be attributed to several factors, it still strongly suggests that the ban was highly effective in preventing mass shootings and keeping more dangerous assault weapons out of the hands of civilians.

It seems somewhat ridiculous that the ban was not continued, as there is no real purpose to allowing regular civilians to easily buy these kinds of guns.

These are not the guns you need for hunting or recreational purposes; these are weapons that make mass killings that much easier.

As this brilliant commercial so aptly points out, assault rifles were not what the Founding Fathers had in mind when they wrote the second amendment and our laws need to be updated accordingly.

It is simply ensuring that those with a history of violence or mental illness would not have access to the kinds of weapons that enable these extreme and violent acts.

2. The good guys can stop the bad guys.

This is an argument that gets tossed around a lot. However, the idea that if only everyone had been armed this mass shooting could’ve been avoided simply isn’t supported by the facts.

According to extensive data collected and analyzed by Mother Jones, not a single mass shooting in the last 30 years was stopped by an armed civilian.

Even more to the point, the times when someone armed did try to intervene, they didn’t just fail to stop the shooter, but actually ended up wounded or killed themselves.

In 2012 they estimated that the number of guns in the US was roughly 300 million guns in privately owned. Considering that the US population was 314 million in 2012, it seems silly to suggest that a lack of guns is the real problem here.

Additionally, there is the problem that in the confusion and chaos of a mass shooting it is likely that with more people shooting even more innocent people would be killed in the crossfire.

In the wake of the San Bernardino tragedy, a new argument is surfacing.

The Facebook comments are flowing in with pro-gun activists shouting that California has the strictest gun control laws and yet they didn’t prevent this shooting.

First, we have to consider that of 355 mass shootings this year, just 25 of those were in California. Now consider this coupled with the fact that California has more than 12 percent of the total population of the US.

Despite having the largest population of any state, California accounted for just 7 percent of the country’s mass shootings.

By contrast, Georgia, which received an F for strict gun laws according to the Law Center to Prevent Gun Violence’s annual state scorecard, still managed to account for approximately 6 percent of the mass shootings despite have only 3 percent of the country’s population.

Based on this, it could actually easily be argued that were it not for California’s strict gun laws, there would be many more mass shootings there every year.

It’s time we stopped relying on half-baked arguments that aren’t supported by the facts as a way to deflect on this serious and recurring issue.

The time to start working on legislature that will prevent tragedies like San Bernardino is long overdue. We owe it to the past, present and future victims of mass shootings.