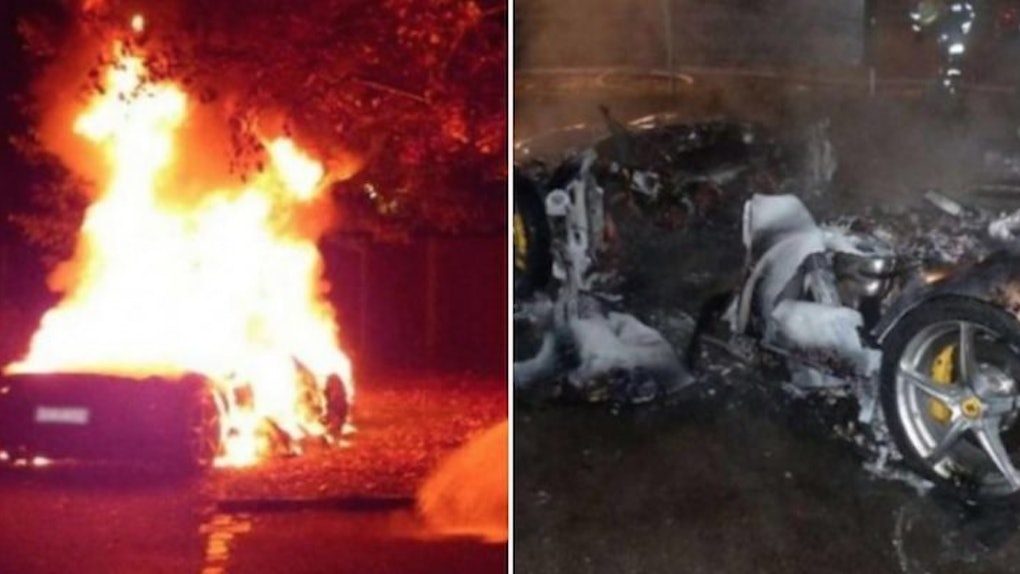 19-Year-Old Wanted A New Ferrari, So He Set His Current One On Fire

When you're living in a first world country, it's important to remember there are people out there struggling for decent qualities of life.

Take, for example, the 19-year-old who was cursed with the burden of driving a 2011 Ferrari 458 Italia provided to him by his Swiss businessman father.

Meanwhile, available to those who can afford it is a 2014 model of the same car entitled teens everywhere are calling, “so clutch,” probably.

The young man did the only thing one can do in a situation such as his.

He reportedly took a little road trip to Bavaria where he spent some quality time with a prostitute and paid a duo of handy arsonists a reasonable $15,000 to soak his ride in gasoline (that goes INSIDE the car, you guys) and set it aflame.

If it weren't for that pesky security camera footage, phone records and other very obvious clues the man should have considered ahead of time, he would have gotten away with it!

Police did assume at first the torched sports car was a consequence for debt owed to the brothel, but through an average amount of investigation, they were able to conclude the young man arranged for the inferno in an effort to collect insurance money and get himself an upgrade.

The young man's father allegedly gifted him 14 cars previously and more than $25 million in properties, but the son was disappointed with his transpo and, frankly, his monthly allowance wasn't going to be enough for the new Ferrari.

The Carsonist is reportedly serving 30 months of probation and paying off about a $33,000 fine, which, if you think about it, is really going to cut into his Ferrari savings.

Citations: 19-Year Old Sets Own Ferrari On Fire Because He Wanted A New One (Zero Hedge)