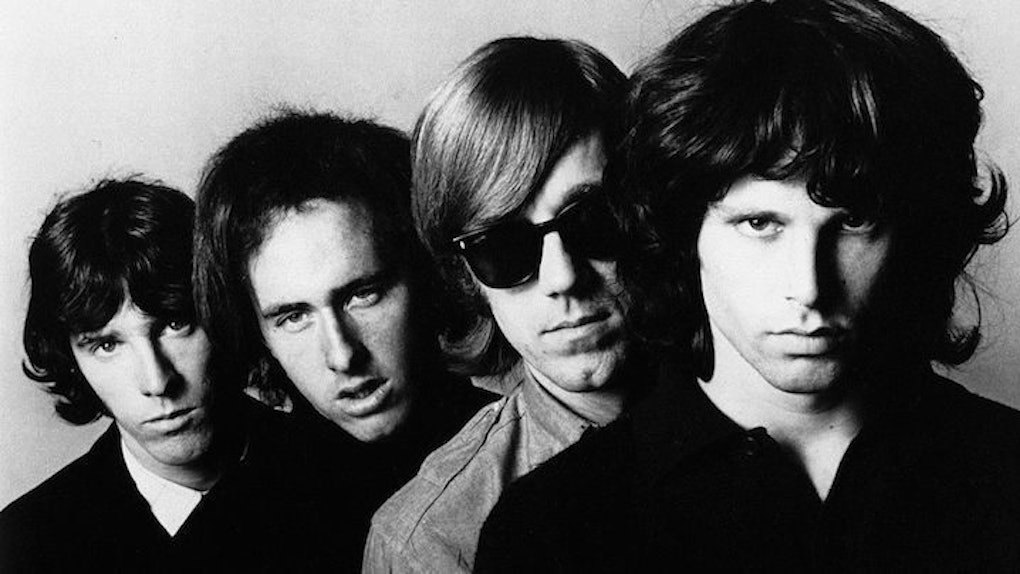 The other day, while shooting the sh*t with a friend over lunch, I made a casual reference to Lou Reed.

This shocked me. Sure, Lou Reed's color career started somewhere around 1972, and my friend was born in 1992, but the guy's a legend. I didn't expect him to be able to rattle off Lou Reed's greatest hits or provide me with his mother's maiden name, but I did assume he'd know who Lou Reed was.

"He's a musician," I replied, shaking my head and changing the subject.

I couldn't really blame my friend, though. Unless he grew up in a rock and roll house, like myself -- who had my father's infinite collection of rock albums at my disposal -- older artists like Lou Reed never seem to be "trending" on Twitter unless they die or get sued.

This incident just reinforced my fear that people my age are too preoccupied with which Kardashian is making the tabloid headlines or the newest batch of Emojis to educate themselves on music history.

I've always been attracted to things that were around before my time, whether it's retro tennis shoes or vintage concert Ts. Music is not an exception.

I like lots of current styles of music -- I'm especially fond of Young Thug and have handpicked a couple killer deep tech playlists on SoundCloud -- but the majority of my day is spent listening to songs that were recorded before I was born.

And most of those artists are just as relevant to my life today, decades later. That's true quality.

So, if you're like my buddy, who thought Lou Reed played power forward for the Knicks in the 70s, I've created a primer on some of my favorite artists from back in the day for you to check out whenever you're looking for something new (but old) to listen to.

Lou Reed truly “gave no f*cks,” in the rawest sense of the phrase.

He wasn’t a fan of the media, and he rarely gave an honest answer in an interview. He cross-dressed. He wore makeup. He sang about drugs and transvestites and sexual exploitation. He definitely wasn't a basketball player.

Simply put, he really didn't care much about what the mainstream thought of him. As a result, he blurred many of the lines that society had previously set for what was socially “acceptable.”

Reed had an incredible knack for taking “taboo” and turning it into something cool. Something enticing.

Check out: Venus in Furs

While most Millennials might be familiar with the name “Jim Morrison,” many haven’t looked any deeper into the man behind the iconic name. Morrison, the Lizard King, was a lyricist, poet and counterculture demigod, among many other things.

From his brazen stage antics to his astute political and social consciousness, Morrison epitomized “coolness.” He was a true visionary, capable of assembling masses and keeping them tied around his finger. But unlike other charismatic artists, Morrison had a purpose -- a message  -- and used his charm to try and spark motion.

Morrison showed a generation of youths that words did mean something.

In her piece for Rolling Stone, Rosemary Breslin quotes Doors organ player Ray Manzarek. "I think the kids are getting the message," he says. "I think they understand the words and the music. I'm very proud of them. They're not a bunch of little idiots. All hope is not lost."

Check out: Been Down So Long

Charlie Parker was more than just a great saxophonist who helped pioneer the bebop style of jazz around NYC in the 40s and 50s. He was also an artist who inspired others far past the boundaries of music.

His unique brand of rhythmic phrasing served as a model for Allen Ginsberg and the other Beatniks to write poetry, in terms of cadence and complexity. Think about that for a second: Charlie Parker's jazz music inspired some of the greatest poetry and literature that our country's ever seen.

Miles Davis, arguably the world’s most famous jazz cat, put it best when he said, “You can tell the history of jazz in four words: Louis Armstrong; Charlie Parker.”

You can tell a lot more too, especially when you dig a little deeper.

Although Marley gets the brunt of reggae-recognition with regard to pop culture, Peter Tosh -- the man who taught him how to play the guitar -- was one of the genre’s most influential figures.

Tosh wasn’t popular, though -- at least not in the mainstream sense. He was portrayed as a militant rebel, and for good reason; the man was known to brandish a guitar fashioned in the shape of an M16 rifle.

Yet Tosh’s message was clear: He wanted change.

And he took action. Focusing on equality and justice for all people, Tosh used his music to inspire and uplift the people of his homeland Jamaica, despite the negative connotation of his “revolutionary” label.

Tosh was, indeed, radical -- but in his environment, radicality was necessary.

According to Sinatra, Jobim was one of the world’s most “talented and innovative musicians,” for “without him, we [Sinatra, and others] have nothing to sing.”

In addition to being a frequent Sinatra-collaborator (and close friend), Antonio Carlos Jobim is hailed as the godfather of bossa nova, which is a derivative of samba (a Brazilian style of music) that placed the focus on melodies rather than drums.

While he’s probably most famous for his hit, “The Girl From Ipanema,” Jobim is widely credited as one of the most influential songwriters of the 20th century. Whenever I’m looking for something relaxing to listen to while I write, I always turn to Jobim for his soothing sound.

Check out: Three-Note Samba (and all of Sabor Brasil)

Thanks to my rock-and-roll-loving father, I was introduced to Zappa at a very young age. As a youngster, I used to laugh at his seemingly nonsensical lyrics, but it wasn’t until I grew much older and started exploring his musical catalogue for myself that I realized how much of a f*cking genius this man really was.

Zappa was brilliant both literally and from a musical standpoint. He's said to have had an IQ that eclipsed 170 (Einstein and Stephen Hawking’s IQs are both in the 160s). And he's known for writing mind-bendingly complex compositions that married elements of rock, jazz and classical music.

Zappa was influential to many musicians today, including Trey Anastasio, who scribed his Rolling Stone capsule for the 100 Greatest Artists.

Plain and simple, Patti Smith is the sh*t.

Known as a “punk poet laureate,” Smith is an artist in the truest sense of the word. She considered herself “beyond gender” and didn’t attempt to live up to any of the material or physical standards of beauty that existed at the time she grew to fame. She simply wanted to make music.

In her memoir “Just Kids,” Smith delves into her relationship with Robert Mapplethorpe, a controversial photographer, and documents their seemingly inseparable friendship. It’s a captivating read and a good place to start if you’re interested in learning more about Patti Smith outside of her poetry and music.

Check out: Because The Night

If you’re a fan of punk rock or weathered an awkward “emo/goth/Hot Topic” phase at some point around junior high school, you’ve probably borrowed some style tips from Sid Vicious, bassist of the Sex Pistols. Although he might not be a great role model for most God-fearing men (and women), there’s something to be said for his legacy.

Much of the pseudo-nihilist aesthetic that accompanies all things “punk” came from Vicious himself. Vicious certainly battled demons for the duration of his short-lived life -- which he presumably ended himself, months after the suspected murder of his girlfriend -- but his vision and sinister grace lives on today.

Check out: Something Else (where he sings lead)

Syd Barrett was misunderstood, which led to his departure from Pink Floyd after their first album, “The Piper at the Gates of Dawn,” despite the fact that he wrote the majority of the album’s material. Cutting to the chase: The band thought he was fucking nuts.

And they might've been right -- but most geniuses are, to an extent. On one occasion, Barrett was said to have doused his hair in Brylcreem (a type of hair styling product) and crushed Mandrax (a type of Quaalude) on stage, which melted under the heat of the stage lights.

And although most classic rock fans would never argue that the band excelled in with David Gilmour (his replacement), I, personally, feel like the band lost a special something when Barrett left.

Many of his recording techniques influenced the likes of David Bowie and many others. When you listen to Syd Barrett speak, you can tell that fame -- and material wealth -- didn’t really matter to him. He was deeper than that.

Like I said, Barrett was misunderstood, and I feel like a lot of his contemporaries simply didn’t care to try and understand.

In many of Keith Richards’ old interviews, he credits Muddy Waters as one of the prominent figures who he “took” aspects of The Rolling Stones' sound from.

In one interview from 1973, he says, “Every English band in the 60s that went to America came here and said we got our music from ‘black records,'" referring to Waters, Robert Johnson, Howlin’ Wolf and other legends of that Mississippi delta blues sound.

It’s hard to deny that. If you listen to the Rolling Stones, the Grateful Dead or even The Doors, it’s impossible to not hear Muddy Waters, too. Even f*ckin' Depeche Mode has an album fully inspired by those Mississippi delta blues.

Check out: Champagne and Reefer

Along with his background producing music directly, Clinton is also responsible for an entirely new sound within hip-hop that came to be known as G-Funk, a blend of gangsta rap and funk music (which he was famous for).

G-Funk was advanced largely by Dr. Dre sampling the music of George Clinton. This sound became the standard for 2Pac, Snoop Dogg and many other high profile West Coast rappers of the 90s.

Check out: One Fun At A Time