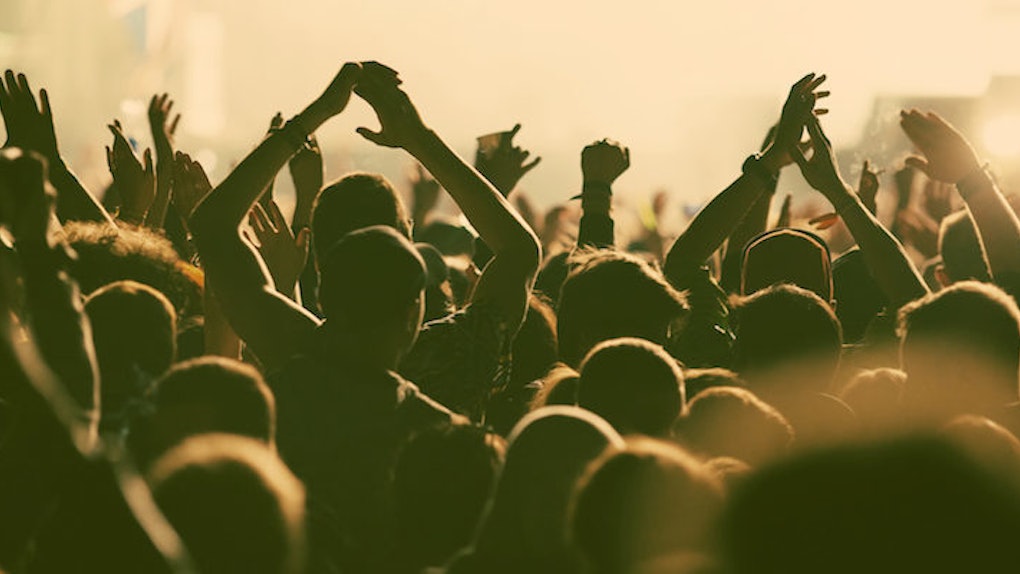 Levitation Day 2 Recap: This Is How It Feels To Make Non-Festival History

In a complete 180 from the day before, day 2 of Levitation, the non-festival festival in Austin, Texas, was a windfall of pure perfection.

I've only spent a handful of the past 24 hours sleeping, so bear with me as I try to recount all of yesterday's events with clarity. It was a day for the books, to be sure.

Keep reading for a timeline of the best night in music festival history. It's as much for my benefit as it is yours.

When I wake up, I compare notes with my friends. Staying with two other couples, our stories are all different. "Did you hear a thunderstorm last night?" I ask my friend Jack, not sure if what I heard was real or part of my dream. "How did you guys not hear that? I thought we were going to die."

"I didn't hear anything," Justin says, followed by his girlfriend, Rosalina, "Yeah, I slept right through it."

We all look outside for evidence and find it in a massive tree branch that has snapped in half. The ground is saturated with water and our windows have been scrubbed clean by the rain's pounding force.

Pictures online reveal the campsite that would have housed thousands for Levitation has been torn apart. Massive tents left from the abandoned initial setup were flung into trees by the wind, while ponds appeared overnight.

One thing is for certain: The storm was a legitimate concern. As much as I and other attendees joked about conspiracy theories and the weather being severely amazing, the storm last night would have spelled total disaster.

An Uber driver will tell us later the front door of his house got ripped off.

Being tucked safely in bed listening to the thunder might have passed for a dream, but being out and in it would have been a nightmare.

I come to the realization festival organizers and Travis County officials made the right decision, and my friends and I start our day with a new level of appreciation and understanding.

3:00 pm -- College radio shows are the most intimate shows.

On a whim, one my friends, Miguel, looked online for Parquet Courts tickets the day before. He found the band would be playing at University of Texas at Austin's radio station.

Now, we all file into the air-conditioned studio with maybe 50 other people and feel incredibly lucky to be seeing the band up close.

In between songs, the radio host interviews the band, making the intimacy of the venue and its capacity all the more heightened. We all start sitting and eventually abandon our chairs to huddle around the band.

I lean against a covered piano and snag a copy of the set list while the band plays my favorite song, "Outside."

Short and sweet, I take this set as another sign my weekend was taking a turn for the awesome.

Not having much else to do until the Animal Collective show later that night, my friends and I jump in a Lyft and head for Eeyore's Birthday Party, a hippie festival in Pease Park.

Legend has it the party dates back to the '70s when Austin locals decided to celebrate Eeyore's birthday since all his assh*le friends -- including Winnie-the-Pooh -- seemed to forget it.

Learning this fact makes me love these people I'm with that much more. I snap some pics of the hotties at this gathering because there's a higher concentration of beautiful people than I'm used to seeing.

It helped the sun came out and it was a gorgeous day. We all wanted that festival experience, the feeling of community, and here we've found it.

Eventually, we all find refuge from the heat in a shady spot by the river where we take off our shoes and dip our toes. A thin man with a shaved head and paint all over his body approaches us. "My body is a living canvas," he says, "Would you like to paint it?"

Starving, I make my way to Texas Chili Parlor to indulge in my first real meal of the weekend. Up until then, my friends and I had been subsisting on granola bars and happy hour tacos while scrambling to find tickets to shows.

We order half of the menu and put our phones away for an hour of quality time. It might be the best meal we ever eat -- partly because the Texas brisket chili is absurd and partly because we needed real nourishment so badly.

While settling into a food coma, we check Gallavanteer, a Facebook group set up last minute to help displaced Levitation goers swap tickets, and this is how our night truly begins.

A guy named Haig posts this,

We have a 32 acre ranch booked for the weekend, 10 minutes east of Carson creek ranch. We have bands that are interested in performing here tonight so we're trying to put it together. Looking for local bands who are willing to share equipment with bands who flew in from out of town with only their instruments. Let's try to coordinate and get a kick ass party going tonight!

We all comment to stay updated on the ranch party developments and while scrolling through the other posts, I find a comment from a dude named Tyler. Tyler wrote,

Anyone get any pictures of my girlfriends tits on stage at Uncle Acid? My phone died.

This will be important to the story later, trust me.

On our way out, we realize this restaurant is also the bar from Quentin Tarantino's "Death Proof," another sign the stars have aligned.

9:00 pm -- Animal Collective's shows are designed for people on drugs.

The light show, the layered, textured songs and non-sensical lyrics that are more primal than anything put us all in a place of heightened awareness whether we were stoned out of our gourds or not.

In a word, it's organic. The projection on the giant linen sheath behind the band is a visual manifestation of the cover of Tom Wolfe's book, "The Electric Kool-Aid Acid Test." Bobbing our heads to an underlying '80s disco beat and swaying to a trippy Björk-like overlay, there is something for everyone here.

A 20-year-old kid bumps my chin with his narrow shoulder for the third time, but I don't even care because he is so, so happy.

Driving miles and miles away from the city, my friends and I venture into the deep, dark countryside. We all sit silently as we speed down the freeway, everyone too afraid to ask the question we're all thinking: Are we driving to our deaths? Are there serial-killing commune freaks waiting for our arrival with chainsaws?

A firework goes off in the distance, instantly abating all our fears.

We find the unmarked, open gate and pull in, following an endless driveway to a semicircle of brand new houses, a covered patio decked out with twinkle lights and a parking lot filled with cars all parked neatly at a slant.

This is what we've been hoping for. I can already tell this is going to be the moment we'll all remember years from now when we've forgotten the festival was canceled in the first place.

We make our way to the patio where Fantasmes is jamming out to a dancing crowd. We've either traveled back in time, or time doesn't really exist.

The fact we're there and the party was just getting started at 2 am was a testament to this group wanting to experience something transformative.

After staring completely transfixed on the drummer for the entirety of the set, I find my group sitting around a fire blazing on the opposite side of the complex. My friend group expanded from five to 20 as everyone takes on an open, accepting state of mind.

Miguel starts giving one of our friends a shoulder massage while I run my fingers through his hair. Within minutes, another dude walks up to us and asks if we know where Molly is.

"Is it that obvious?" Miguel asks.

We could chalk all of this up to our elevated states of mind, but I like to think this is how we would all be everyday if it weren't for our inner critics. My ego dissolved to nothing, I have no filter and wouldn't want one. I have transformed from my typically cynical, sarcastic assh*le self to the shamelessly earnest and sweet 5-year-old I almost lost touch with.

We are all communicating with the utmost sincerity without irony and without fear of being judged. Who wouldn't want to feel this way, surrounded by these beautiful souls?

And, not to detract from the point I just made, but at 4 am my cat eye is still going strong thanks to Wet'n'Wild waterproof liquid eyeliner. This travelogue isn't sponsored by Wet'n'Wild or anything, but that sh*t doesn't quit.

When my friends and I get home, the sun is swiftly rising. We could attempt to process the day we've just had, but there is too much for us to cover all at once. Instead, we take the best showers of our lives and smoke on the back porch.

Someone pulls his or her phone out and checks the Gallavanteer Facebook page. Someone found a video of Tyler's girlfriend approaching the Uncle Acid & the Deadbeats stage, bare breasted and all.

This is how it comes full circle. Like any good piece of nonfiction, it fits a little too perfectly to feel true. You could never get away with that kind of ending in fiction; you have to leave a few loose ends.

But in this case, I'm willing to just say f*ck it. I've had the best night of my life, and sometimes that's enough. No message, no meaning, just unadulterated good times. You can't ask for more than that.