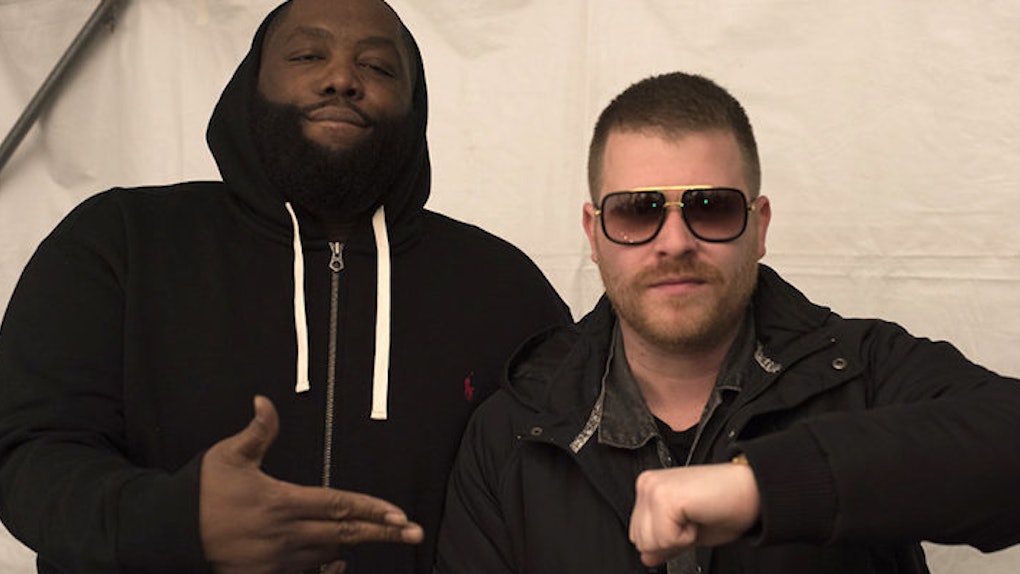 For Killer Mike and El-P, reinventing themselves at this stage of their careers wasn't just a no-brainer, it was the easiest thing they could've done.

For 16 years, Killer Mike has been one of the most respected rap artists from Atlanta. He's been a social activist for even longer.

El-P has been producing and rapping since 1993. He became the CEO of his own record label, Definitive Jux, in 2001.

In 2010, they began collaborating and found some serious chemistry.

Then in 2013, they formed the supergroup Run The Jewels, proving dudes over 40 still got it.

Their outlandish lyrics and aggressive style are stark contrasts to the chilled out, introspective men they really are. Being in a group has allowed them to try new things and push the envelope.

Both guys were at a point in their careers where they wanted to just focus on making some dope music. As appreciators of the great history of hip-hop, they saw a void in the market and realized they could dominate.

In an era of solo musicians and hardly any duos, the inspiration was simple.

Run The Jewels sat down with Elite Daily before their performance at the 2016 Winter X Games in Aspen and Killer Mike explained:

This is not an age of rap groups. We just wanted to be that raw ass rap group.

El-P went on to say being in a group together was a culmination of everything they love to do:

We just took what we already had, which was just a deep, rich history of love for rap music, rap groups, for the art of the joy and the feudalism of rap music. And then we injected it with our hearts and our souls and we created this monster that somehow allowed us to be deadly serious when we wanted to and absolutely stupidly ridiculous when we wanted to.

Of course, switching up the way you do this late into your career has to have its challenges, but not for Killer Mike:

This is the easiest sh*t for me to do to be honest. Of course there are obstacles, but you're not alone anymore. It's like you're on a f*cking SEAL team. I know I got somebody that's got my back, I know I'm figuring things out, I know we got a common goal.

The way they see it, the challenges they face as a duo are all within themselves. El-P explained:

With a resurgence in relevance, this new platform gives both guys the ability to do even more things they love to do. Killer Mike said:

Music just allowed me to pursue stuff I'm interested in. I own barbershop with my wife, I've always wanted to do that. I just bought another building I'm interested in making money with stuff I like. It's really been cool to be part of a group to give me a plateau to try things I like.

However, what's been more rewarding is their ability to help others. El-P explained,

It's been very empowering for me and Mike I think to have this mechanism to set off a whole bunch of things that really meant something to us as people. We got to the chance to personally donate to the victims of police brutality, to the families of people who had lost their children, illegally and unjustly, and we got the chance because we make silly rap records and because we have fun. We got the chance to turn that into something that effects someone in a positive way.

The biggest part to their evolution as artists is not forgetting who they are as men. El-P says:

We just let our hearts guide the way we interact with people and do business. We let our gut guide us and we're lucky and happy that our guts were right. There is no us versus them anymore. What you're trying to do is get music to people who love music and then you're trying to build life around the thing you're love to do. And it's very simple and if you keep your heart and your direction straight on that, it's not too confusing.