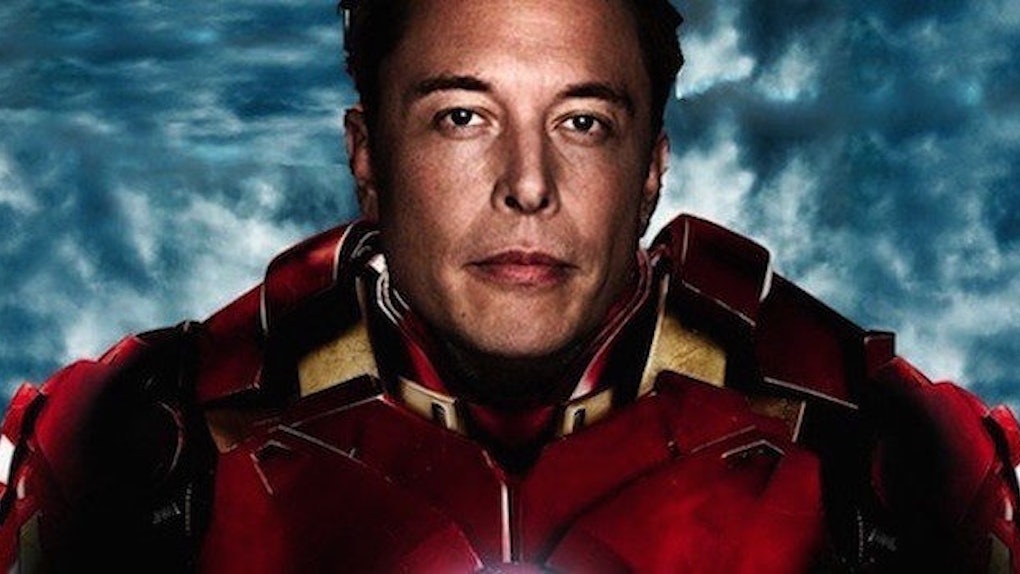 Why Elon Musk Is The Most Important Billionaire For This Generation

Elon Musk is Iron Man. I mean that in the best (and worst) way possible.

With every person who dares to turn conventional thinking upside down, there are bound to be glaring weaknesses among his or her equally powerful strengths.

Though Musk doesn’t suffer from the same gripping demons as the Marvel comic book hero, he does share the character’s fetish for living fast and hard with a price tag only people with his wealth can afford.

This shouldn't come as much of a surprise. An entrepreneur like Musk really shouldn’t be anything less than a daredevil.

Crashing his (allegedly uninsured) McLaren F1 after making $300 million off his first Silicon Valley sale is really the perfect precursor to his current career: He dreamed, he drove and against all odds and he escaped what should have been an imminent death.

Tesla almost tanked several times during its first few years of existence. SolarCity shouldn’t have stood a chance amongst a plethora of green energy skeptics and flubs like Solyndra. SpaceX dares to do what NASA couldn’t without the support of large federal budgets.

And now, the Hyperloop seems to have an opportunity to unite cities at almost triple the speeds of a Maglev Train.

What enables a person like Elon Musk to do the things any conservative investor or entrepreneur wouldn’t even dare dream of doing?

That’s where the Iron Man bit comes in: Musk can do what he does simply because he isn’t afraid to crash in a horrible twist of fate, toppling a sports car — designed by a motor company that produces racing machines for international death matches — off a highway shoulder and sending it into an uncontrollable barrel roll off the side of a moderately steep hill because, well, who knows? Maybe he’ll walk away with a damn good story and the balls to do it again.

But, of course, a taste for high risks and an unwillingness to stomach the office life doesn’t guarantee you, too, will become the next real-life Iron Man.

If anything, that sort of aimless recklessness will grant you a guaranteed early and explosive demise.

Becoming the next Elon Musk requires sophisticated and intelligent maneuvering to understand just what people need in the distant future to help the world grow in currently inconceivable ways.

For instance, it was only 30 some years ago that GM tried its hand at an electric car. Most were impounded and destroyed after their production lines were cut short by cheap and accessible oil.

Yet, here we are discussing Elon Musk and his batteries on wheels (and now walls).

What Musk is able to do in this incredibly stagnant and resistant economic climate is enter a market that is barely a market, make it highly relevant and then disrupt the status quo in the biggest way possible: By proving he can stay afloat while doing everything wrong.

Everything he has touched has created a large wake within its respective industry.

Tesla spurred the now surging EV market; SolarCity revitalized initiatives to make solar power affordable to current consumers; SpaceX inspired at least one fierce competitor in the privatized space race; and the Hyperloop may gradually give way to publicly supported, yet privately funded, fast and expansive transportation that will change American travel entirely.

Though, Musk’s opposition will be quick to point out that he has chosen fields within federal interest, and the way Washington shows that interest is through publicly funded subsidies. Call it cheating, call it whatever you want, but Musk has certainly had help building his futuristic companies outside of his own fortune, a fund that could have and almost did dry up very early in his entrepreneurial rise.

But, does this mean he’s incompetent or unable to create and lead successful ventures?

No, at least not if your definition of “successful ventures” includes large-scale technological advancement or market disruption.

If that was indeed Musk’s end goal, to send the world into a frenzy of technological development, he has succeeded beyond anybody’s wildest expectations (and here I do actually mean technology, not the watered-down Cupertino interpretation of gadgets and mostly useless software applications).

Musk can be blamed for catastrophic business decisions, but one must acknowledge his knack for keeping his seemingly poor choices in companies alive is impressive and inspirational.

Whether or not Musk’s companies produce millions or billions in returns or sales, Musk will go down in history in much of the same fashion as his motor company’s namesake.

He will be remembered not for the riches he procured, but instead, for building a pathway for others to follow.

This is, arguably, the best legacy to leave behind after you’re long gone.

All that money you’ll leave behind may be helpful to your benefactors, but the real treasure is leading others down a road that will forever shape the outcome of future civilizations.

A bit grandeur, I admit, and yes, many of these industries I’ve been discussing have been around for decades.

However, Musk made them so painfully mainstream, you can’t avoid any of his companies’ news or announcements.

You heard about SpaceX’s first attempt (and failure) at landing it's reusable rockets and saw the fiery spectacle on YouTube, didn’t you?

The fact that these events are such a part of pop culture attests to the character I claim Musk relates to in the Marvel universe.

His charismatic approach to business is what makes his companies seem less IBM and more Apple. First, he creates a buzz about what many consider to be obsolete or boring, if not entirely useless.

Then, he delivers on promises no one believed he could fulfill and later, he finds a way to make aspects of those impossible ventures even more impossible. Wash, rinse, repeat.

This is why I call Musk Iron Man and why I believe he is the most important billionaire alive today. He’s not making money to make money or to buy power or control.

Musk is using his money to take us to Mars; to show the world a car company can and will make electric vehicles with upwards of 200 mile ranges by using clean, renewable energy; and to show us all the aspects of our current civilization are outdated, yet entirely capable of being changed.

And before I’m destroyed for not being more in favor of Bill Gates or Warren Buffet, keep in mind those guys made (and make) their money off products that arguably added to landfills as much as they incurred large strides in American capitalism and technology.

What I’m talking about here is Musk’s businesses, not his charities, and I think that’s a very important distinction to keep clear.

If, for example, someone made a billion dollars off making and selling cigarettes, then used that fortune to try and save the depleting numbers of various endangered species, does that make up for the fact that he added to world’s largest pollutant in the sea (cigarette butts) or that he added millions of cases of lung cancer with the use of his product?

I mean, hey, nobody’s perfect, and a lot worse can be done in the name of money and power.

But, of all the billionaires who are active today, Musk seems to be the only one throwing his cash into ventures that are so incredibly unlikely to succeed by traditional standards.

It's daring and noble that instead of making more Internet apps, Musk created his world of useful technologies and processes that pertain to the overall wellbeing of our planet.

By creating a manufacturing plant to produce batteries and cars using only solar and wind energy, figuring out how to reuse rockets and making solar energy viable for homes and businesses, Musk has done more for the future viability of human life than any other billionaire in Silicon Valley to date.

Maybe I'm overly optimistic about what he can do or the amount of inspiration one truly maverick billionaire can have on the rest of the world.

But, if this trend of his continues, the chances of seeing a SpaceX landing module touch down on Mars in the next few decades are a lot higher than you’d expect.

He may not have a flashy, rocket-propelled exo-suit, but I wouldn't put it past his to-do list.