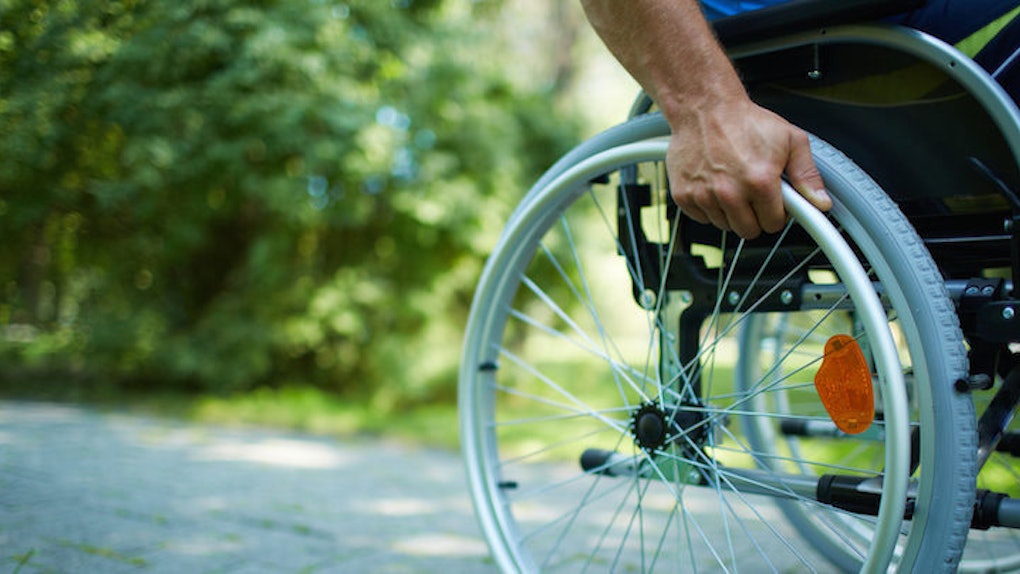 5 WTF Moments All Wheelchair Users Have Experienced At Least Once

Before diversity and “embracing your differences” were en vogue concepts, I was born with congenital muscular dystrophy. Since I have been a wheelchair user since I was 5, this business of sitting down all the time is not new to me.

Frankly, this is my life. In turn, I’m an expert. Sometimes, things I encounter on a daily basis just become part of the white noise of my day-to-day. So much so, they become somewhat the norm.

This is not to say it’s ideal or optimal. But, it’s just different crap for different people, I guess. I raise a ruckus when it is warranted, but often, I just shake my head at how weird the world is.

Sometimes, I don’t even notice how bizarre some situations are until I find myself in them with one of my upright, bipedal-walking loved ones. They just stare at me, dumbstruck, with a face that can only emote, “What the eff just happened?”

So, I have decided to let you in on those little moments of "WTF" that I, as a woman with a disability, face on a regular basis:

1. People want to pray over you.

Perhaps this trend is not as common outside the South (where Jesus is embossed on nearly every human body and auto body in a 100-mile radius. I’ve had hands laid on me and tongues spoken at me because of absolutely nothing.

People are generally nice about it, but not always. I’ve heard that if my faith in prayer was stronger, my body would follow suit. That’s an awfully bold assessment coming from a complete stranger, don’t you think?

2. People want to congratulate you for the most banal things.

More than once (this year), I have been doing something completely mundane like picking out takeout food or waiting in line at Target. But then, a stranger has told me he or she is proud of me for “getting out.”

He or she will pull me aside — sometimes interrupting a conversation in progress — to give me a high five and engage in some conversation against my will about how it’s “so great to see someone with a disability out doing stuff.”

Clearly, these people don’t get out much. Seriously, the number of times I have heard the phrase, “You go girl!” uttered is shocking, especially since it isn’t 1997.

3. You’re told you are someone’s hero with absolutely no provocation.

This one is flattering, but it's also super awkward. Even though my self-esteem may be a little too high, I understand I’m not that cool or brave. I spend way top much time on Facebook and following "The Bachelor" contestants on Instagram to ever deserve esteem.

I feel like “heroic” and “brave” are just automatically tacked on to people with disabilities, and they shouldn’t be. Wait until I save a kitten from a fire. Then, you can use the term and have it actually apply.

Since I've gotten my driver’s license, I have become keenly aware that if there is a hell, it looks like a parking lot. About once a month, I get someone who doesn’t park within his or her lines or decides the striped loading zones are spaces, therefore giving me no room to load into my vehicle.

I’m trapped until the assh*le returns to his or her automotive. There are also the horrors of going somewhere where the parking is located in a giant field or a sloped gravel area somewhere. In those times, I might deserve that "hero" status for being out in the world.

5. Strangers will be faced with a huge dilemma when they address you.

Sometimes, people just don't seem to see me. I like to delude myself into believing that because I reside at waist height, people are just too lazy to look down. (Something about posture, I’m sure.)

However, I know that’s not exactly true. People just aren’t sure how to talk to a person with a disability. It appears that some members of the general public believe they have only a few options when this scenario presents itself:

a. Ignore the person in the chair altogether. b. Talk to the people hanging out with the person in the wheelchair, as if these companions are translators. c. Raise their voices and talk slowly, as if they're guessing an answer on "Wheel Of Fortune."

The correct answer is "none of the above." Just talk to the person in the wheelchair.

This is not to say all things about having a physical disability are negative. Wheelchair perks exist, and they are golden.

You get priority in a lot of situations (concerts, airports, etc,), which is a nice consolation for the bullsh*t I mentioned above. Anyway, awkward moments make for the best stories.