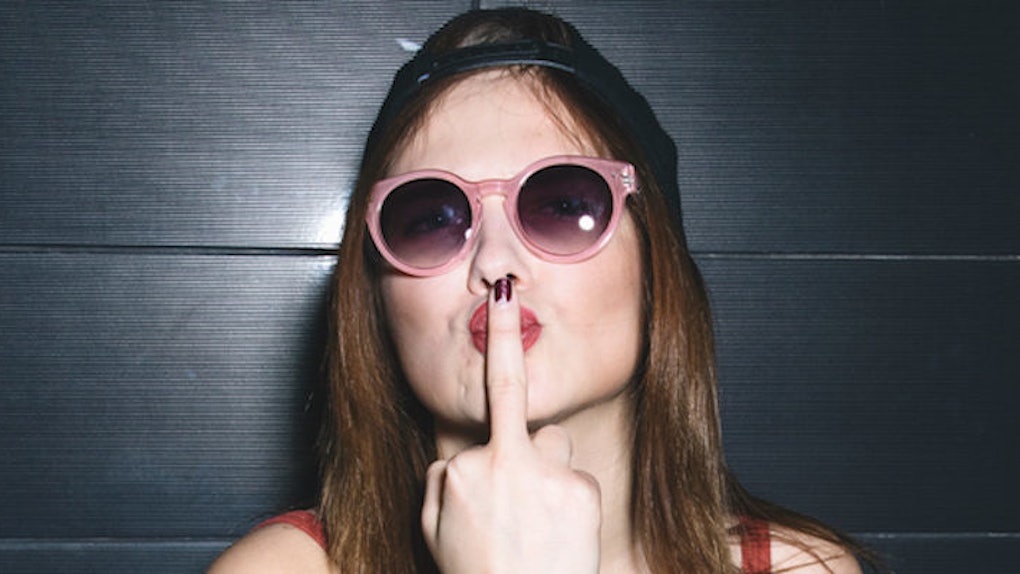 On one of my first days of high school, I was hanging out with Ashley*, a junior who was way cooler than me. I really looked up to her. She was wise the way an older teenage girl is always wise to a freshman newbie.

But on this day, Ash would prove to be truly sage beyond her years.

We were sitting in her car with a few of our friends when I spotted Carey* from across the parking lot.

Before the words barely left my mouth, Ashley had pulled her door closed and zoomed out of the parking lot. We were moving so quickly that I think she left track marks.

“We're not hanging out with Carey, Gigi. She sucks.”

And she was. Carey was a perfectly nice, plain girl. She'd never done anything mean to me. I didn't really like her, but she was OK.

“Gigi, life is too short to waste on sh*tty people. You don't have to be friends with someone you don't like,” Ashley stated.

This statement hit me like a bolt of lightening. It was a revelation! You don't have to be friends with people you don't like?! WHAT?!

Yes, it's true. It's f*cking true. And this is a PSA to you all. I am so finished listening to my friends, co-workers and family constantly complain about the annoying, boring, sh*tty people they put up with.

So, here we go. YOU DO NOT HAVE TO BE FRIENDS WITH PEOPLE YOU DO NOT LIKE.

A person can be “nice” and still suck.

Look, being nice is AMAZE. Kind people are so rare, and if you're lucky enough to come across one, NEVER let this person go.

"Nice" is vapid and boring. It is vanilla: flavorless, dull and inauthentic. A person can be NOT an assh*le and still be sucky to be around. Remember that. You don't owe someone your friendship just because they are generally a nice person.

If a person doesn't excite you, if you don't jump at the opportunity to spend time with him or her, f*ck it. F*CK IT. F*CK. IT.

You shouldn't be friends with someone just because you NEED a friend.

Loneliness is not an excuse to hang around sh*tty people you don't like. I'm sorry, no. Get your sh*t together, and learn how to be alone.

If hanging out with someone sucky sounds better than being alone, you're the one being an assh*le. You're essentially using someone by pretending to be his or her friend when you don't even like that person.

Are you really that petty?

You garner respect by standing up for yourself.

So many people think they'll look “mean” if they choose not to associate with some douchecanoe who wants to be their friend. But your peers will respect you a LOT more if you stand up for yourself and stop being so conscious of other people's feelings.

You don't have to tell sucky people to go f*ck themselves, but you can say NO when they ask you to hang out. You can IGNORE them when they try to start up a conversation. You can WALK AWAY.

If you're being super friendly towards people who suck, you're a giant pussy.

The other day, my cousin told me she was going to model for this random photographer. She said she didn't want to go because she wasn't getting paid, but that she felt bad because she originally said she would.

I told her this: You do not have to do ANYTHING you do not want to do. You are not obligated to do ANYTHING for ANYONE unless you a) want to or b) are being PAID ACTUAL MONEY.

I am so tired of watching people do favors for each other out of some bizarre sense of obligation. WTF are you doing? STOP IT. Friends do things for FRIENDS. That is all.

Stop spending time with people out of guilt. That is no way to live your life. The older you get, the more you realize you hate everyone, but the key to WINNING at life is to stop chilling with those people you hate.

Life is too short to waste time on sh*tty people.

The world will move on from your dismissal of those sucky individuals you cannot stand. Everyone will get over it.

BUT, if you spend all of this energy keeping a fake friendship, you could waste your life pretending to like someone. How f*cking horrible does that sound?

Life is so goddamn short. Please don't waste it on people who aren't worth a moment's thought. Spend it having multiple orgasms, laughing until you pee and making millions of dollars, not tiptoeing around a bunch of dickholes who wouldn't know a personality if it bit them in the ass.

And for F*CK'S SAKE, please stop complaining about it to me.