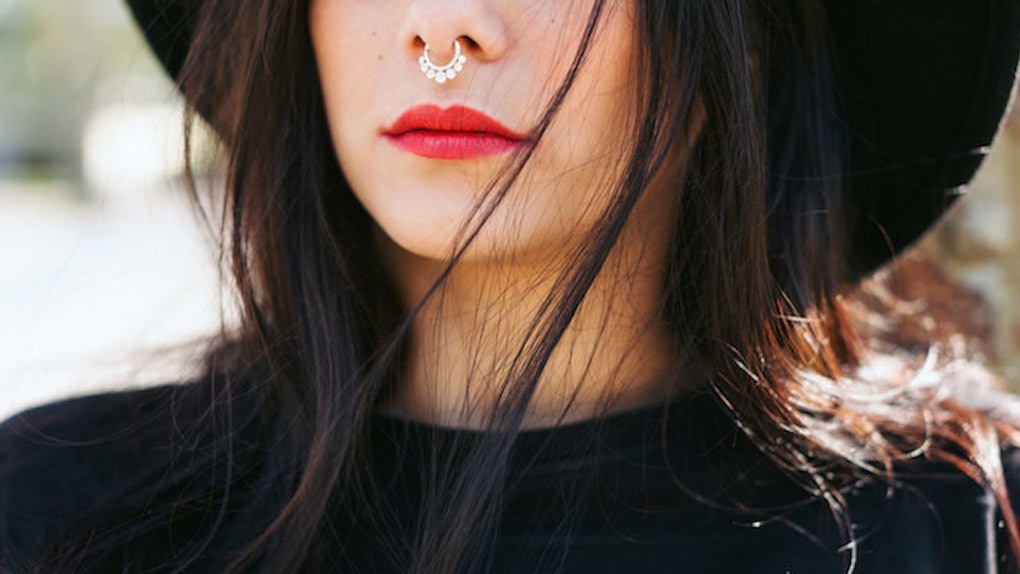 My Worst Nightmare Came True: I Watched My Ex Make Out With Her New GF

Two weeks ago, my worst fear came into fruition: I watched my first love salaciously suck face with her new girlfriend, right in front of my own two eyes.

But truth be told, I don't feel like prettying up this situation. I watched my ex suck face with her new girlfriend. There isn't any poetry in that. I wish there were.

It was the Saturday that really chic, whimsical blizzard invaded the island of Manhattan. (I f*cking love the sh*t out of blizzards.) I woke up and gazed into the urban winter wonderland manifesting outside my Upper East Side window before sending out a group text to my small group of uptown girls:

"Girlz, let's go to the bar and blizzard party. See you at NOON at our local PUB."

"YAS!" They unanimously replied. I could already smell the pending pretty girl trouble permeating in my bedroom.

I felt really smug and pleased with my uncanny ability to be CHIC under such dire conditions as I waltzed down Lexington Avenue to meet my girls at the bar.

Holding court at the bar was my gorgeous friend, Sheena, a writer at Elite Daily whom you can't help but smile around when in her electric presence. She has large, expressive doe eyes, an authentic giggle and killer style. She was eating smoked salmon and drinking a beer. So f*cking effortlessly chic.

Next arrived Courtney. Courtney is my fashion-designing roommate, who has the most amazing head of brilliantly shiny hair you have ever seen. I'm convinced that my life would be different if only I had that head of goddamn hair. She looked like a Ralph Lauren ad in her over-the-knee boots and loose-fitted chunky knit.

Needless to say, we were quite the colorful crew sitting there in our little uptown watering hole. The bar was packed to the rafters. Apparently I wasn't the only freak fueled with a desire to wickedly party under dangerous weather conditions.

We stood out, us fancy ladies, our leather boots and winged eyeliner boldly contrasting the preppy sea of textbook boys in knitted textbook boy sweaters.

The next thing I knew, it was 2 pm, and we were all cozied up, collectively buzzed, nestled in a small corner with new friends we made thanks to our alcohol-fueled friendliness.

There was Jay*, a boy creature who worked for J. Crew. Next to him were two big bro hunks who were wildly hitting on Sheena and Courtney. I outed myself as a big lez, so I was deep in platonic convo with J. Crew boy while Sheena and Courtney flirted their way through the afternoon.

I took a hefty sip of my vodka and looked out the window. The lighting outside was soft and lovely, the bright white snow looked like a cream blanket warming up the city. I tried to fight the cliche drunken moment creeping up in my bones, but alas, I couldn't -- I let myself fall into a romantic New York City moment right then and there.

I'm YOUNG, I romantically purred to myself. I'm LIVING THE DREAM in the greatest CITY IN THE WORLD.

Don't ever complain about anything again, Zara. Just to be here, I drunkenly thought to myself. This is a blessing. Be present. Enjoy it.

The four vodka sodas I had consumed were clearly starting to kick in, hard.

Just as I was spiraling down the nauseating New York love vortex -- BAM, the wooden doors of the pub swung open.

In flew my ex-girlfriend like a rabid bat soaring out of hell. She was clearly on a good one herself, her epically long mermaid hair flying, her loud voice belting "Heyyyy COURTNEY!!!" echoing across the bar.

What the f*ck was she doing uptown? Lesbians under the age of 30 are never uptown (except me, of course).

I wasn't upset to see her. I love my ex-girlfriend, Liz. She's one of my best friends. We were knee deep in the quicksand of young love for three years but sh*t -- that was a long ass time ago.

I genuinely couldn't wait to catch her up on the slew of family gossip this week in "Zara Barrie Family Drama."

"LIZZZZZZ!" I shouted, throwing my arms around her, breathing in her familiar smell of men's cologne and girly hair product.

"OMG I HAVE SO MUCH TO TELL YOU. YOU WILL NEVER BELIEVE IT, BUT GUESS WHO IN MY FAMILY IS HAVING ANOTHER BREAKDOWN?!"

Then, I stopped dead in my tracks as she protectively slung her arm around an unfamiliar girl creature. Oh, so this was the new girl I'd heard about through the lesbian grapevine.

I introduced myself to her new girlfriend, feelings of pride swelling in my body. GOOD FOR YOU Z. YOU'RE IN A STRONG EMOTIONAL PLACE. I'M PROUD OF YOU, I boozily congratulated myself.

Two years ago this would have resulted in MAJOR drama, and I just wasn't going to let it happen this time.

I went back to my attractive group of straight girls and threw myself into a conversation with Sheena about how "Blizzard sex is the best kind of sex" and the importance of "the blizzard f*ck buddy."

I averted my mascara-adorned eyes to the left in hopes of finding the bartender when... I. Saw. It.

A disturbing image flashed before my bleary buzzed vision and burned itself into my mind forever.

Liz and her new girlfriend were deep in a passionate lip-lock. And not just any kiss, but a full-blast, scandalous, feeling-each-other's-bodies KISS session.

Yes, I'm totally, totally over her. But lez be real babes: Do you really want to ever watch anyone you once loved passionately kiss another person?

I drunkenly gazed right at them, not believing my eyes, almost thinking it was nothing but an inebriated mirage.

"Zara, are you OK?" Courtney asked, sinking into the wall, reading my mind. This babe just always has the ability to cut through my steel guard of bullsh*t with her heavy-hitting gaze.

"I'm fine!" I exclaimed, overcompensating with fake enthusiasm as I took a prissy sip of my drink.

But I wasn't fine. And I couldn't fake it (despite a lifetime of acting classes with the nation's best teachers) because I could feel a lone tear making its way down my hot cheek.

"Just keep drinking!" Courtney wisely commanded, taking a dramatic sisterly sip of her beer. We're in this together girl, her energy read. God I love her.

"But I'm really FINE!" I pressed as I stared at them and guzzled the remains of my Tito's. My eyes continued to well like a repressed thunderstorm.

F*cking tears blowing up my spot!

Sheena and Courtney attempted to pull me away, but for some reason bigger than myself, I was relentless.

I kept watching. I kept staring. And herein lies the weirdest thing: The longer I stared, the less scary it all became. It was like that one time my friend made me stare at a raccoon from her car window. I'm terrified of raccoons. "Face your fears," my wise friend coached.

At first, I wanted to vomit. Then, my skin felt like it was crawling with a million creepy bugs. But little by little, it became totally NOT scary. I began to breathe and realized it was just a f*cking raccoon, and it couldn't kill me, especially from the safety of a car.

That's exactly how it went with Liz on the first great blizzard of 2016. At first I wanted to die, then, I had irrational visions of dying alone and being loveless forever, but the longer I faced it, the more it lost its power.

I was still breathing. My ex and her new girl getting it on weren't going to kill me. Few things really can, Kittens, you know?

And in that drunken moment, I learned a pivotal life lesson that I will carry with me for the duration of my life: It can feel like a bad dream to see someone you once loved make out with someone else. But as awful as it is, it's not going to destroy you. And that alone is EMPOWERING.

No matter how many times we get rejected from dates, or hurt by our exes, or experience sharp pangs of jealousy, the worst thing that will happen is we will feel bad for a short while. But feelings, all feelings, are wonderfully temporary.

Yes, I felt sh*tty watching Liz for a hot second, but the dark feeling was as fleeting as a quick-fix, dirty drug. And eventually, I felt kind of happy for her. I came full circle in a matter of seconds. I didn't know how I had the ability to do that.

Liz and her girlfriend left, and I was left shocked and amazed that I survived what I thought would be soul-destroying. Not only did I survive, but I was in one solid gold piece.

I felt free, like no ex could ever creep back in my life and hurt me again. I felt liberated from the tethers of the past, entirely.

How wonderful to know the things we thought would hurt us, actually won't!