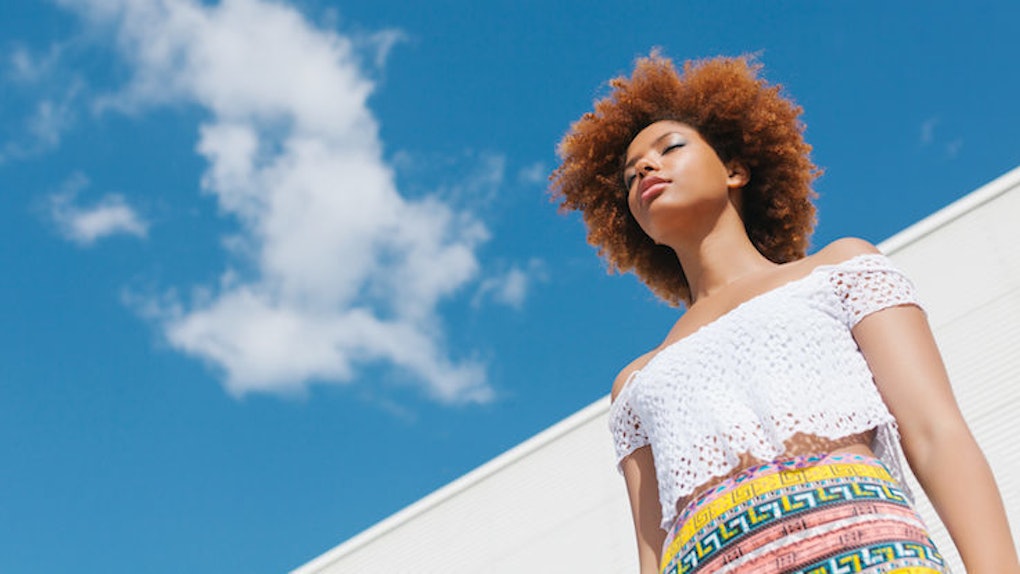 My Life Didn't Turn Out The Way I Wanted, But I've Never Been Happier

You know that scene in every single rom-com? It's the one where the young, defeated protagonist is sitting in the midst of a cramped apartment, covered in discarded clothing and dishes. She's wearing an old t-shirt and underwear, and clutching a wine bottle and a bowl of melty ice cream.

While I was growing up, that scene played over and over again in almost all of my favorite romantic movies. I remember sitting on the floor in my living room, feeling pity for the freshly-scorned young women with their disheveled hair and an affinity for having soggy cereal for dinner. This specific scene, which was included in virtually all movies involving love stories, really had an impact on me.

I remember thinking to my 12-year-old self, "That will never be me." I felt so sad as I watched all those women's lives fall apart after they lost their loves. Each movie portrayed the women the same way: lost, listless and lovesick.

My mom and I used to watch these movies together on Saturday afternoons, while my dad was out of the house and we had the TV to ourselves. Every time this scene popped up, my mom would warn me about becoming " that girl."

She was determined that I should not let my life unravel at the first sign of heartbreak. She made sure that I was well aware I was destined to become a strong, independent young woman.

For the most part, I never wanted to be "that girl." In my head, the perfect scenario for me was growing up to be a modestly successful, happily married woman with a fulfilling job and spare time to write.

I can't help but sigh as I think about this. Honestly, it's not that I don't see the beauty in this. In fact, I am deeply moved by my friends who married their loves early and started their family lives.

But when I had my first real love, everything changed. Suddenly, the images of the heartsick, miserable women in all of my mom's favorite movies were shoved into the darkest corner of my mind. It was the place where I kept all the things I didn't care to think about, like algebra and my unreasonably dorky middle school style.

We lasted about four years, until the first week of my senior year of college. That's when the image of the broken-hearted, lonely girl started creeping back into my mind.

There was one major difference between the girl I imagined and the girl I saw on TV: you know, the one who my mom desperately warned me about. The girl I imagined was not some unhappy, messy creature. She was living in the moment and throwing herself at the mercy of life's ups and downs. Suddenly, I was deeply envious of that girl.

Maybe it was the random glorification of being single that crowded my Facebook newsfeed. Maybe it was the women and gender studies courses I took: the ones that preached that young women ought to be fiercely independent and in control of their lives. Maybe it was the fact that I knew we were starting to grow apart, and that we needed to end things before they got messy.

It doesn't matter what that reason was: I ended my four-year relationship during the first week of my senior year. The craziest part was, I had moved in with him just a month prior.

So, with nothing but hope and the giant cardboard box of sh*t that I had collected over the years, I called a close friend and begged her to let me move into her apartment. Fortunately for me, she allowed me to pack up my random belongings – including a hedgehog with a penchant for running on her incredibly loud wheel at about 4 in the morning – and dump them into her spare closet.

We shared a bed for the first 11 weeks, and we've been sharing our apartment ever since. Our other roommate is just as laid-back. Together, we form a trio of slightly scattered – but altogether content – young women.

Just the other day, I realized I've become the girl I never wanted to be. But somehow, this is the best I've felt in ages.

I now find myself spending most of my time doing whatever the hell I want. I run. I go to yoga. I drink wine out of the bottle, and I pretend I'm some sort of full-fledged journalist.

On the weekends, I wear a little makeup and an all-black ensemble, and I go out to the bars with my girls. Yes, there are also those nights I spend in an oversized t-shirt and my Victoria's Secret cheekies, while I dig into a bowl of cereal and watch documentaries all by myself in the middle of my lovably disorganized apartment.

I don't particularly like rom-coms anymore, but I'll watch them. When that fateful scene plays and I see the girl whose life is falling apart sit alone in her apartment with adorably knotted hair and smeared mascara, I give her a little nod.

I like her now. Sometimes, I wish the movie could end right there.