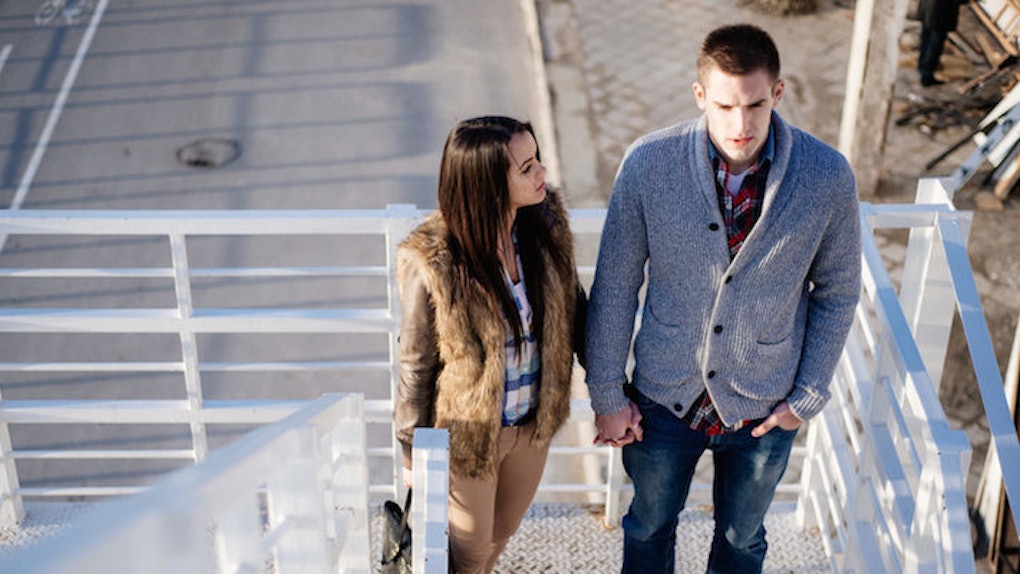 Your Inability To Orgasm: 26 Things Men Never Think Are Their Fault

If responsibility was a burrito, men would eat it and still blame someone else for the smell.

Katty Kay and Claire Shipman, in an article for The Atlantic, talk about the confidence gap between men and women. One of the main reasons women are less confident than men, according to Kay and Shipman, is because men blame everything else while women blame themselves. Women have a tendency to assume the blame when things go wrong, whereas men do the opposite.

David Dunning, a Cornell psychologist, took note of a specific course in Cornell’s math Ph.D. program that’s known to get extremely difficult throughout the semester. He observed the differences between how men and women reacted to their changing grades and found that men responded to their lower grades by saying, “Wow, this is a tough class,” and women responded with, “You see, I knew I wasn’t good enough.”

I couldn’t help but think of all the other things men refuse to take the blame for. From the time you got lost because he refused to ask for directions (and assumed it was the GPS’s fault) to the time you caught him texting another girl, there’s no limit to the things men see as beyond their control and “not their fault.”

Louie C.K. said it best: “When a person tells you that you hurt them, you don’t get to decide that you didn’t.” According to men, however, they definitely didn’t. You’re just crazy.

2. That time you got lost

It’s the roads, the maps, the city, the town, the direction and definitely the guy they didn’t ask for directions.

3. Your inability to orgasm

The classic bait-and-switch. Instead of worrying about what they’re doing wrong, it’s the automatic assumption of, “You have a problem, don’t you?” or “Is it genetic?”

It was their car, the subway, their roommate. It doesn’t matter that they only gave themselves 10 minutes to go a 30-minute distance.

6. The fight they get into

It’s always the other guy... AKA “the douchebag.”

It’s not their fault they can’t afford a maid.

8. The movie they made you watch that you thought was bad

What do you mean bad? Everyone knows “Transformers 3” is a classic.

“I never said anything bad about whores.”

10. That bad investment they made

11. That time they cheated

I mean, you should have known. The relationship had been bad for a while. It’s not his fault; he fell into her.

12. Not being able to read your mind

Even though you told him why you're upset, he still likes to see if he can figure it out telepathically...

It’s not his fault his mom never taught him.

14. Not knowing how to do laundry

He just assumed he'd be rich enough to hire a maid by then. Why waste everyone's time?

15. Checking out another girl

She walked into his line of vision. What’s he supposed to do? Stare down at the ground?

Is it his fault your birthday and your anniversary fall on the same day? That just makes it twice as hard to remember.

They've known those guys since elementary school! How dare you judge those guys.

What do you mean? He was just being himself. Do you not accept him the way he is?!

19. Forgetting to take the trash out

He didn't forget. He just wanted to wait until a more convenient time. You know, around midnight.

20. Taking hours to respond to a text

You're the one who's needy.

It's not his fault women just fall in love with him. All he did was tell her he loved her, and now she's acting like they're in love or something. Clearly, she's crazy.

What is this, The Ritz?

Is there a law against telling a girl you "think you could really see yourself with her" just so you can see her naked?

He doesn't even know how to use Instagram. He thought he was deleting her. How do you delete friends, anyway? It's not double tap?

26. Still having Tinder even though they're in a relationship

He forgot it was on his phone! How many things does he have to remember just to be in a relationship with you? What do you mean it was active three days ago? He was clearly just using it for research...