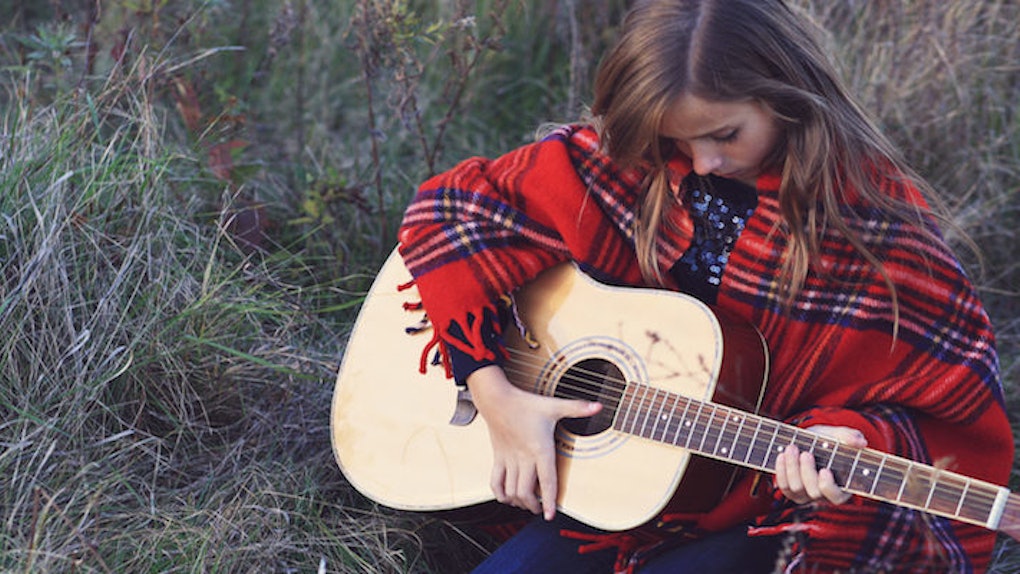 "Pardon, mate. Can I ask you a question?"

Audrey was 16 years old when she first snuck into a salacious dive bar in the thick of East London. Tucked into the corner of the bar was a grand piano, a scruffy hipster boy pressing down on its keys and a porcelain-skinned goddess of a girl adorned in a red vintage swing dress daintily perched on top, singing her gorgeous heart out.

Audrey was instantly entranced by the girls’ honesty and vulnerability. Of course, she had listened to music a million times, blasted it in her headphones on the endless rainy walks to school, but this was the first time Audrey ever really heard music. It was the first time music really moved her, really made her heart drop into her gut.

When the song ended and the singer swiftly hopped off the piano, the blissful warmth from Audrey’s third gin and tonic began to overcome her. So, she marched right up to the piano player and was eager to share her wild epiphany: She knew in that moment that she could sing, and she irrepressibly needed to show it off before the gin wore off and she lost her nerve.

"Sure, darling,” the piano player replied. He was smoking a Marlboro light and his voice was removed, his eyes fixated on the cigarette ash accumulating on the floor.

"Do you know how to play the song 'You Know I'm No Good' by Amy Winehouse?"

The piano player’s silence hung heavy in the smoky air. Just as Audrey was about to walk away, he responded, "Yeah love, I actually do."

Finally, he peered up at her, and his tired brown eyes took in the reckless sight of her: an impossibly scrawny teen girl hovering above him in torn skinny jeans and dirty oversized flannel, with long legs, chipped blue nails and scuffed black converse. Black liquid eyeliner framed her intense, inquisitive cat eyes, and a sea of wild hair piled up on the top of her head in an effortless bun.

She was a beautiful mess.

For most of her life, no one was aware of Audrey's natural musical talents. Not even Audrey. But now, she was about to show the entire bar exactly what the f*ck she was made of.

"You wanna sing it then?" he asked her, stubbing out his cigarette with his steel-toed boot. The piano player was madly intrigued with her. Did she, this stunning, street-rat, teen girl creature, actually have something?

Audrey was so elated that she could have kissed him on the mouth. She didn't even need to say yes -- it was written all over her beaming face.

She took a last, un-ladylike slurp of her gin and tonic, aggressively set it on a stranger's table and hopped up on to the piano.

She might have been clad in secondhand ripped jeans. She might have looked like nothing but a 16-year-old punk. But the whole room felt a shift in energy the moment she plopped her bony body on that fine piano top. They knew they were about to witness something historic.

She was suddenly stone cold sober as she grabbed the microphone and pressed it to the surface of her lips. Her palms were so sweaty that the microphone felt like it could slip out of her slim, shaking fingers.

The piano player winked at her and began to gracefully glide his fingers across the keys. She took a deep, loaded breath, closed her mascara-adorned doe eyes and began to f*cking sing.

Her voice was like velvet. It effortlessly oozed out of her, like maple syrup slowly falling onto a peanut butter and banana sandwich. It was like a glass of smooth red wine luxuriously making its way down the contents of your throat. It was like a shot of whiskey, soulful and sexy, innocent and dangerous all at once.

She felt every single word she sang. There was zero separation between her and the melody. She wasn't singing the song; she was inside of the song.

The bar patrons couldn't believe what their fine ears were bearing witness too. It was the most magnificent singing they had ever heard in their lives.

Every single person in the room was teeming with relentless desire: Who was this girl, and when, dear when, could they hear her sing again?

When she finally stumbled home at 2 am, Audrey tucked herself beneath the worn cotton sheets of her twin bed and cried tears of joy. She had felt mediocre her whole life. But now, she was talented! Extremely, gorgeously, fabulously, wonderfully, undeniably talen-f*cking-ted.

She fell asleep smiling and didn’t wake up until 1 pm the next day.

When she woke, she stretched her tired arms and leaned toward her phone. There was a plethora of missed calls and unread text messages on the home screen.

Gah. I will check it all later, Audrey thought to herself. She was sorely exhausted. Plus, now that she was officially deemed talented by the masses, phone calls could most certainly WAIT.

Audrey lit a joint in her kitchen and smoked the entire thing whilst perched up on the counter. After stamping it out in the sink, she slugged her way toward the couch. She turned on the television and fell into a stoned, slowly sifting sleep.

Seven hours later, she hazily emerged from her drug-induced slumber and curled up into a ball on the sofa, gazing into the static screen of the TV and totally, completely and utterly forgetting to check her phone.

Then, the following morning, she listened to her voicemail:

"Hey Audrey, it's Rick. I'm the owner of the Cat Club. I heard you sing last night. I would love for you to perform at our artists showcase tonight at 7 pm. Every major executive from every major label will be there. Call me as soon you can. They're excited about you."

Audrey dialed Rick back in a frenzy. Her call went straight to voicemail. She left him a frantic, apologetic message.

Stella had been at the showcase that Audrey was supposed to be at. Stella was a lovely singer, but nowhere near as gifted as Audrey.

But Stella had picked up on the first ring when Rick called her about the showcase. Stella had spent the entire day rehearsing her song, finding the most perfect outfit and warming up her voice. Stella had made sure she responded to emails and phone calls right away. Stella had made her career a priority.

While Audrey was brilliantly talented, she never had an ounce of work ethic. Even after her first screw up, she never put in a real effort to have the thriving career she could have had. She wanted it, but she also took days to return phone calls and showed up to every gig 20 minutes late.

People got fed up. Word got around.

The truth is Audrey's talent was completely irrelevant without work ethic.

You can be the most talented girl or boy to ever grace this fine planet, but that talent means nothing if you don't work your ass off. The hard worker always wins.

You will watch a sea of people who are far less talented than you but are mega driven soar to the top of the totem pole.

Girls, don't let this happen to you. Don't sell yourself short. Channel your God-given gifts into creating something f*cking amazing, and spend your life putting that f*cking amazing work out into the universe.

The truth is, talent is wonderful, but there is an abundance of it. To just be talented isn't enough. You have to separate yourself from the rest of the talented crowd by being the most professional, easy-to-work-with, responsible, driven force of nature.

And don't ever rely on luck. Luck is for the weak. Be proactive and rely on the only thing you have: yourself.