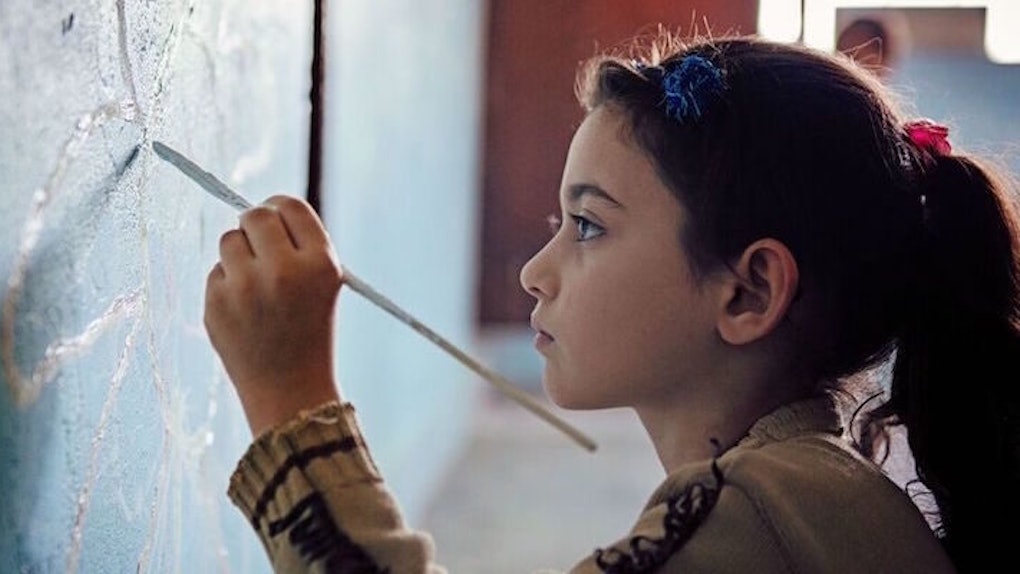 This Nonprofit Helps You Sponsor Refugees While Helping Them Get Educated

Eleen is a 9-year-old Syrian girl with wide brown eyes and a knowing smile. She lives with her family in the southern Turkish town of Reyhanlı, just a few miles away from the Syrian border.

Eleen fled Syria two years ago. She has been displaced for almost five years. Her father was shot by a sniper in during the early anti-government protests of 2011, and was left paralyzed by the injury.

The family lives — like the over 4 million Syrian refugees in Turkey, Lebanon and Jordan —outside the “formal” refugee camps. This means they live outside the limits of most humanitarian aid services.

Families like Eleen's have been sentenced to live in squalid conditions — storefronts, factories, unfinished buildings, overcrowded apartments — while spending the little savings they have left. They often live without access to adequate health care or education, and without legal rights to work.

These living conditions have left millions of Syrians with few choices: return home to Syria and risk the constant threat of bombs and violence, gamble for a better future in Europe by risking drowning or deportation along the death routes or wait in limbo, as powerless refugees in neighboring countries, until the endless war finally ends.

In the year 2016, are any of these options really choices? And in the face of the largest humanitarian crisis of our lifetime, what can we, as individuals, do to create better choices and futures for refugees?

When we met Eleen last September, she and her brother Jamil had not been to school for years. Instead, they took care of their father and toddler brother, while their mother tried to find odd jobs to support her family. Her mother told us, “Eleen is very smart and has beautiful handwriting. She wants to go to school but we can't afford to send her.”

This is the story of millions of Syrian children who have carried the heaviest burden over the past five years. Children have lost their homes, friends and carefree childhoods. They have experienced and witnessed violence and thus suffer from trauma that often goes unacknowledged and untreated.

Most displaced Syrian kids have severe educational gaps because they are constantly moving from place to place seeking safe shelter from the brutal violence. Some children have had to drop out of school to become child laborers to provide for their families. Others, like Eleen and Jamil, took on the responsibility of taking care of an injured family member instead of going to school.

We signed up Eleen and Jamil for school as part of Karam Foundation's Sponsor a Syrian Refugee Family program, in which struggling families get a monthly stipend on the condition that they send their kids to school. Eleen and Jamil have been going to school since last September.

This is a photo of Eleen last month at her school. She received honor grades in every subject.

We believe in investing in Syrian refugee youth by giving them access to innovative education programs, holistic wellness clinics, technology and entrepreneurship opportunities. We believe that despite the despair and destruction, we can and must all invest in creativity and innovation for refugee youth.

What I have learned from working every six months on the ground with Syrian refugees is that ripple effects of our programs begin to appear everywhere.

There are hundreds of kids in Reyhanlı whose lives have been impacted forever because of their interactions with a writing mentor or an artist, a coach, dentist, coder or an entrepreneur. These are kids who can imagine a concrete future for themselves because of the talented and dedicated people we bring into their worlds. Kids who now believe they can not only be successful, but become leaders.

Our work is like planting small seeds in a massive desert of need — powerful seeds that grow and manifest in ways we can't even imagine.

I know that to many of you, Syria seems too distant and complicated. The humanitarian crisis seems too vast in scale to make a meaningful impact. Despite distance and scale, we all still have the power to make meaningful and life-changing contributions to refugees.

We can collectively do better as Americans to help refugees. We must do better. We do not live in isolation, as some presidential candidates would like us to believe. We live in a connected, global world in the 21st century.

It is unacceptable that people are drowning in the sea by the thousands, at a rate of 10 people a day, every day, since January 1, 2016, from Turkey to Greece. It is unacceptable for millions of children to be denied their right to an education and thus their future.

There is nothing that separates any of us from the millions of refugees who are fleeing conflict zones to seek safe shelter, except the sheer luck of where we were born.

It is time to see refugees as what they truly are: real people like you and me, who have pride, hopes and dreams. These are brave and resilient people, who when given a chance, will surpass all expectations. It's time to see refugees not as a global crisis, but our global opportunity to build a more compassionate and stronger future for all of us.

With a simple act inspired by listening to people's needs and investing in the future, we changed Eleen's life in one day — forever. This is something we can all do.

To read more about Eleen's story and dozens of others, and Karam Foundation's broader Smart Aid for Syria projects, please visit karamfoundation.org.